RUSH: Okay, let’s move on now to Jon Stewart because the fake news said sayonara and the real news is in trouble as well on the left. Now there are serious discussions — I’m not kidding, and you probably have heard them, serious discussions among serious left-wing pundits and journalists that it might be time for Jon Stewart, since they tried to get him for Meet the Press and didn’t work, to put him in there in the NBC Nightly News. If they do that, and fine and dandy, whatever they do is fine with me, but it isn’t news anymore.

But they won’t admit that. They will continue to try to tell everybody that they are exhibiting the highest form of journalism, that it is objective and fair, when that’s the last thing that’s going on. Now, what happened to Stewart shocked everybody yesterday on his show by saying he was gonna retire sometime this year. The exact date of the final program not known.

There are a lot of myths about Jon Stewart. You know what the biggest myth about Jon Stewart is? That his audience is Millennials. The second big myth about Stewart’s the size of his audience. It’s about a million. But it didn’t matter, because the content was exactly what the pop culture dictates wanted. The content of the Daily Show was exactly what those who police the pop culture and declare it hip or unhip wanted it to be. So it was elevated to a position it actually did not achieve or attain.

But that doesn’t matter because perception is reality, particularly in politics, and if you can tell people over and over again that a program that has a relatively small audience is number one, they’ll end up believing it. And if you tell ’em it’s the hippest and the coolest and the really hippest and coolest of the young people that watch it, even though that’s not true, either, people will end up believing. What do you think the average age, according to market data research, the average age of The Daily Show viewer is? Forty-one. That is the average age of a Daily Show viewer, 41. That is from Bill Carter, who released that statistic while writing at the New York Times.

So there are many myths, but I’m not here to dispel the myths. I’m just here to tell you about them.

Now, let me look at the audio sound bite roster here and see if anything jumps out. Well, grab number six. This one… This one, maybe it’s too inside baseball to me. This is a montage of various people last night and this morning talking about what a pioneer Jon Stewart is or was.

BRIAN STELTER: Jon Stewart, who has revolutionized and pioneered a new form of news and satire…

MARC SNETIKER: Stewart was able to combine wit and intelligence.

FRANK SESNO: He’s revolutionized the news or satire or whatever it is in an unbelievable way. He may be the Mark Twain of our time.

RUSH: Man. That last one was Frank Sesno, by the way, who used to be at CNN. (interruption) They do believe it, every word. Absolutely! They believe every word they said here. This is part of the illusion that they’ve created. They damn well believe this. They believe everything that they said. They firmly believe it, even though it isn’t true. (interruption) Mark Twain? No, I’m not talking about the Mark Twain business. I’m not talking about that. But the fact that nobody had ever before combined humor and satire and serious commentary?

Let’s see. What’s next? You think they don’t believe it? Listen to this, is David Zurawik is the Baltimore Sun TV critic. He was on CNN’s New Day today, and he was asked a question. “It’s interesting to see as we talk about Williams, first in a very low point of his career, probably the lowest in his career, and yet we see Stewart going out at the height of his career, going out on top.”

ZURAWIK: That’s refreshing in this business, to see someone of that stature go out on top. I couldn’t agree more. You know, I went to bed last night thinking is he as important as Johnny Carson? And I woke up thinking he’s more important than Johnny Carson. He changed the culture. He taught us to think about politics in a different way. He made it part of primetime entertainment.

But who in the media doesn’t champion Obama? Who in the media does not champion Nancy Pelosi or Feinstein or Harry Reid, you name it? Who in the media does not celebrate, champion, and promote the Democrat Party? Jon Stewart was the latest of countless others who have, and they call that revolutionary? There wasn’t anything revolutionary about it. There was certainly nothing new about how to look at politics. Stewart’s way was like everybody else in the Drive-Bys: Democrats, great; Republicans, conservatives, racist, sexist, bigots, homophobes. What was new about it? This is what I mean about the myth making that has taken place. Bigger than Carson, more important than Carson.

He had an audience of a million. But what they will tell you is that you can’t just look at the audience of people who watched television, because so many Millennials, which another myth, make up the majority of that audience, which they don’t. But the way they counter the fact that the audience is only a million people, “Well, but look at the people streaming it the next day, the people watching it online, on their iPhones and iPads the next day, dwarfing the number of people that watch on TV.” That’s how they try to get you to think the audience is bigger than a million. But it isn’t. There’s no win in saying that, but it’s the way it is.

RUSH: It was Karen Tumulty. Snerdley, you’re not gonna believe this. You weren’t in there. You had left right as the previous hour — somebody sent me a note saying they’d seen a tweet that Stewart leaving was the equivalent of the Beatles breaking up. (laughing) Whoa. You know who it was? Karen Tumulty of the Washington Post and formally TIME Magazine, and she tweeted, “For people under 30, Jon Stewart leaving The Daily Show is the equivalent of the Beatles breaking up.”

Now, she’s old enough to know better. Folks, what you’re seeing here, I knew this was gonna happen. You’re gonna have these lib media types falling all over themselves trying to come up with the most syrupy, sickeningly sweet, almost obituaries. And again, it’s everybody being the same. Everybody thinking the same thing. Everybody trying to say the same thing in the most creative and beautiful way. There’s not a single person trying to distinguish themselves in this. They’re all trying to be — what’s the way to put? — they’re all trying to remain qualified and eligible to remain in the big clique. And this is what happens. 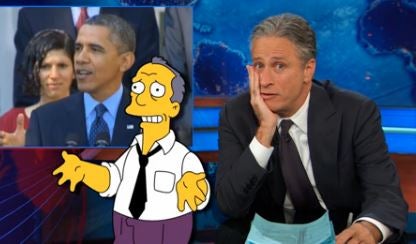 Anyway, there are other things happening out there, but I knew this was gonna happen. I should have warned everybody when the program started, it’s gonna get worse as the day goes on, because these libs are gonna be in a quiet friendly competition with each other to come up with the most unique obituary or the most unique, syrupy, sickeningly sweet, meaningful analysis of what it all means. I have a question, but, see, if I start talking about this in grave detail they’re just gonna accuse me of having opinions and thoughts about this that I don’t. So I’m unfortunately tongue-tied in being able to talk about it. I mean, I could, but I don’t want to deal with the fallout over something like this. I’ll save the fallout for stuff that matters.

And let’s get on to stuff that matters. Not that this doesn’t. I mean, it is a liberal media implosion taking place out there, looked at in one way.