America’s Vets vs. NBC (Not) News

RUSH: Speaking of war and a related story, NBC News — ah, I take it back. NBC is not a news organization, as I pointed out yesterday. But regardless, they’re under fire from Iraq war veterans. They are really under fire. It happened over on MSNBC on Scarborough’s show in the morning, which I just saw, has an audience of 350,000. It’s near the bottom of the list of rated programs on cable news networks. And yet to listen to the left talk about it, it’s the only thing that’s happening in the morning. It’s where you gotta be if you want your finger to the pulse.

You want to know what’s going on, you want to know what to think about what’s going on, you gotta be watching Morning Joe, but only 350,000 people are. And don’t give me this business, “Well, they’re streaming it on their iPhones and iPads the next day.” No, they’re not. It’s not an appointment show. Anyway, some wacko, typical left-wing so-called journalist reporter on MSNBC named Ayman Mohyeldin just lit into Chris Kyle. He picked up the meme that has evolved on the left ever since American Sniper started cleaning up at the box office. And by cleaning up, I mean setting records. 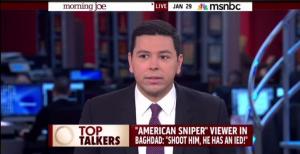 The American people were showing up to the theater, in many cases, for the first time in years, and they were sitting there totally transfixed at the end of the movie, and then standing and applauding. A genuine American hero. So the left sees this, they see this unabashed, unstoppable force of love and power and support, and they can’t stand it. Why, it’s the US military being cheered. It’s a sniper being cheered. So immediately they create a narrative that Chris Kyle was a bigot and a racist and a murderer in a place where there was a war going on, declared hostilities. You cannot have murder in a war, declared hostilities, not of combatants. Not unless the left gets hold of it.

And so in the process, this reporter, Middle East reporter, Ayman Mohyeldin, just one of many, by the way, to pick up this meme, started ragging out Chris Kyle as a murderer, racist, bigot, thug, killer, no heart, no compassion, and goes on to point out how this is typical of what the US military is and what it’s become. And Iraq war veterans are outraged.

More than 20 retired generals and admirals have written a letter to Comcast, which owns NBC. This particular interview on Morning Joe happened on January 29th. Now, this reporter said, “Some of what people have described as his racist tendencies towards Iraqis and Muslims when he was going on some of these, you know, killing sprees in Iraq on assignment.” Now, to be fair about it, Scarborough was taken aback by this and clearly was uncomfortable by it.

Anyway, the Washington Examiner got hold of the letter. It was sent out Tuesday. It demands an on-air apology from this Middle East reporter at MSNBC. It doesn’t matter whether they apologize or not, which they probably will not. Just the fact that it happened, the military is playing a prominent role in the exposing of NBC News for what it is and isn’t, and this is just the latest example and illustration.