RUSH: Did you watch the Saturday Night Live 40th anniversary show? I didn’t, either, when I figured out I hadn’t been invited. They wanted me on that show one time, and, boy, I must tell you, I almost did it, and had I done it, it would have been one of the biggest career mistakes I’ve ever made.

Lorne Michaels actually called. This is back in the nineties. They wanted me to come out and play Santa Claus on their Christmas show. I learned later that the whole thing was intended as a setup for Al Franken’s book. He was still a writer then, an occasional performer.

Lorne Michaels got on the phone and it was a pleasant conversation. I talked to him about what he wanted me to do. “We want you to be our Santa Claus.” They didn’t want me in a skit. They didn’t want me as a guest host or cohost, whatever they’re called. They just wanted me in there as a punching bag or whatever. And my instincts, they’ve never steered me wrong, my instincts said, “Don’t do this.”

Anyway, the point is I didn’t watch the show, either. But I’m reading about it and, folks, they just dumped all over Brian Williams on this show last night. Jim Carrey got it started. He’s asking people at NBC, this is the red carpet (paraphrasing), “Where are you hiding Brian Williams?” We can’t find him. Does anybody know where you have him stashed away?”

And then Martin Short said — the audience is made up of NBC executives — “You know, the roof, the literal roof could cave in on this show right now, and it would be the least of NBC’s problems.” Jerry Seinfeld, who you would think would have some sort of bond with Brian Williams, meaning that both are on the talent side, said, “I didn’t know until tonight that Brian Williams was in the original Saturday Night Live cast back in 1975.” Now, the point is they’re making jokes about this on an NBC 40th anniversary show. 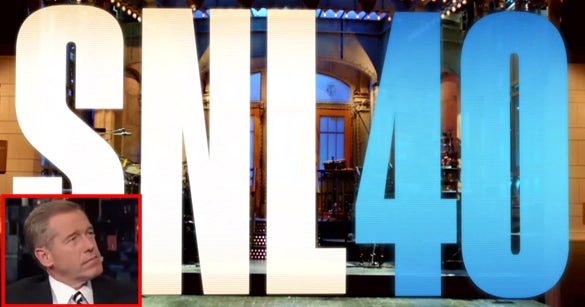 There’s also this story on Page Six in the New York Post. This is the strangest thing. “Contract ‘Morality Clause’ Could Determine Brian Williams’ Future — Embattled NBC News anchor Brian Williams’ fate beyond his six-month unpaid suspension could hang on a ‘morality clause’ in his contract — which means he could be fired if he offended ‘a significant portion of the community’ or brought himself ‘public disrepute, contempt, scandal or ridicule.'”

Why do they even need this? “The anchor has lawyered up with Bob Barnett, the distinguished attorney who also repped Ann Curry.” He doesn’t have an agent. He’s always used Barnett. It’s nothing new that he’s got Bob Barnett. You know, Bob Barnett, he’s married to the former CBS infobabe, Rita Braver. She anchored the news during the Rather days when he was on CBS. She Barnett’s wife, or was. I assume still is. But Brian Williams has never had a TV agent, per se.

RUSH: Yeah, you know what? It’s just an impression I had. In fact, it was more like a feeling than a thought, and I very rarely make final judgments based on feelings. I am unalterably opposed to that. But I’ve had a feeling about this Brian Williams thing that from the beginning he was never really accepted as somebody in the anchor club at the highest levels of the Drive-By Media. It’s a feeling, as I say, it’s not a thought; it’s something I maybe had a gut feeling about, and, as such, I haven’t discussed it.

Brian Williams dropped out of — let’s see, he went to community college, then Catholic University, and then George Washington University. None of those are Ivy League schools. Now, I don’t know if that is a factor in the fact that so many of his colleagues are not rallying around him. I thought they would, as I mentioned here numerous times. I thought it was a lock that the other two anchors, the other networks would help circle the wagons to protect Brian Williams because that’s protecting the news and that’s protecting the cause, liberalism, but that isn’t happening.

When he got the gig, when he got the anchor chair, NBC Nightly News, however many years ago that was, I had a, as I say, it was just a feeling that he’s someplace that nobody really thought he would end up being. He was always said to be in waiting behind Brokaw, but I don’t think anybody ever really thought that would happen. I don’t know if it’s a factor now in the way he’s being treated or not.

CALLER: Yeah, hi, Rush. It’s both a honor and a miracle to speak to you at the same time.

CALLER: Been listening to you since 1988. 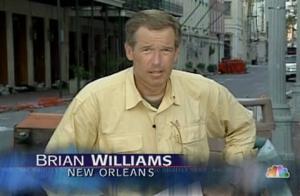 CALLER: Yeah, by the grace of God you came on the radio and by the grace of God I was able to find you. And, Rush, you’ve been right I think a hundred percent of the time on everything that I’ve listened to, but there’s one thing I think you’re wrong about, I know you’re wrong about, actually, and that is denying that Brian Williams saw a dead body float down the French Quarter. I know this because I was that dead body. I floated down the French Quarter, I went a couple miles, and I was actually resurrected through some voodoo and came back to life, and I’ve been trying to talk to you since then about a couple of issues.

RUSH: So you were the dead body floating down the street in the French Quarter?

CALLER: I was the dead body, yes, that Brian Williams saw.

CALLER: There goes your accuracy rating. And you know if I sound still a little nervous, it’s waking up to this, you know, voodoo snakes hanging all over me.

RUSH: I can imagine it’s gotta be tough for a dead body to be talked, much less call and talk about himself like you’re doing here.

CALLER: But since I’ve come back to life, I wanted to call and I finally got through to talk to you a little bit about —

RUSH: The grace of God, eh?

CALLER: By the grace of God. (laughing)

CALLER: I wanted to talk to you about some of this stuff that’s been going on for years within the GOP, and that is the big bundlers and big money people getting behind wishy-washy candidates and supporting them, and the five million people that stayed home last time for Romney and just didn’t vote.

RUSH: Wait a minute. Wait a minute. That is an interesting way that our dead man spoke here. He said that the big money donors get behind the wishy-washy candidates. And what I take that to mean is — and I don’t think the dead body said something he didn’t mean to say — what he’s saying is that a wishy-washy candidate is preferred, and they hope and pray the guy get elected because then you have a much easier time controlling a wishy-washy guy who owes his election to you, rather than somebody with a spine who might stand up to you. And therefore, he is explaining why the big money guys support these wishy-washy guys. And that is to have total control over them without having to run for office themselves. That’s a pretty incisive thought here for somebody who Brian Williams saw when he was dead. Appreciate the call, Eric.

RUSH: David Brooks commenting on the crease in his slacks of Brian Williams. No, I’m just kidding. This is on Friday night’s NewsHour on PBS, Judy Woodruff asked Brooks, “Okay, look at the Brian Williams question. I guess what I’m curious to know is, David, does that reflect on everybody in the media? How does the media come out of this Brian Williams episode?” 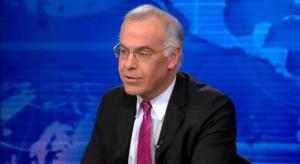 BROOKS: I personally think the reaction against him is way out of proportion to what he did it, and I think we all have to cultivate a capacity for forgiveness, for rigorous forgiveness to forgive what he did. And I personally hope he continues his job.

RUSH: See? This is intellectual-speak like I have never heard it. “I think we have to cultivate –” who the hell cultivates? Farmers cultivate. What is it, we have to cultivate a capacity for forgiveness? Why can’t you just say we need to forgive him, or we need to learn how to forgive him. What is this, we have to cultivate a capacity? Do you think he talks that way with his intellectual buddies when they go to — where do they go? The Harvard club? Well, they might, actually. But my point is sportscasters, like some golfer will walk off of a hole with a par, and let’s just use Tiger since it doesn’t happen anymore (imitating sportscaster), “And Tiger Woods authors a par on the tough 17th here at Augusta National,” whatever it is.

No, he didn’t write a par, he didn’t author a par. He shot a par. He got a four. What is this authored? Does a sportscaster, at the end of the day with his buddies when they go eat, talk about how Tiger authored a par there and somebody authored a double bogey over there? They don’t talk that way. But you think Brooks does? (interruption) Okay. Probably so. So they do probably sit around and talk about the crease in people’s slacks. But that’s only half of it. “Cultivate a capacity for forgiveness, a rigorous forgiveness. (interruption) Regular forgiveness, not un, gonna be rigorous. A rigorous forgiveness.” Now, rigor, if you look it up, that’s a lot of effort, hard work. I’d like to see rigorous forgiveness, I’d like to see what that involves.

They want a vigorous active executive. Now we got rigorous forgiveness to forgive what he did. Well, Mr. Brooks, you’re not gonna have a whole lot of trouble because the stories now are starting to pop up about how everybody does it. Everybody lies, everybody exaggerates, it’s just that not everybody anchors the NBC Nightly News.