Now, Rudy’s dialed that back just a little bit. On Fox & Friends today he said he wanted to make it clear he’s not questioning whether Obama’s a patriot. He thinks he is. He’s just dismayed that, quote, “I very rarely hear him say the things that I use to hear Ronald Reagan say or Bill Clinton say about how much he loves America. I don’t hear him say it.” So he’s dialed it back a little bit. Doesn’t matter. We still have the audio sound bite, reaction to that. That’s coming up, just wanted to let you know.

RUSH: Rudy Giuliani, he walked this back earlier on Fox, but he said, “I do not believe — and I know it’s a horrible thing to say — but I did not believe the president loves America.” He said this during a dinner last night in Manhattan. It was at 21. It was a dinner for Scott Walker.

It actually had a bunch of conservative Reaganite types. Walker, it was his turn last night, this same group that was Stephen Moore. Oh, man. Grover Norquist. There was one other. They’ve had one of these dinners for other potential Republican candidates. Last night was Scott Walker’s turn. It was at that dinner where Rudy made these comments. “I know it’s a horrible thing to say, but I don’t believe the president loves America. He doesn’t love you and he doesn’t love me. He wasn’t brought up the way you were brought up and I was brought up, through love of this country.”

Now, he’s walked that back a little bit on Fox this morning by saying he just never hears the president talk about how he loves the country like he always heard Reagan talk about it, he always heard Clinton talk about how much they loved America, but he never hears Obama say it. So let’s go to the sound bites. This is Rudy on Fox this morning, Clayton Morris is interviewing, he said, “You said, ‘When I hear the president speak, that I don’t believe he expresses the love of America as much as he does criticism of America.’ What do you mean, Mr. Mayor?”

GIULIANI: I’m not questioning his patriotism. He’s a patriot, I’m sure. What I’m saying is in his rhetoric I very rarely hear him say the things I used to hear Ronald Reagan say, the things I used to hear Bill Clinton say, about how much he loves America. I do hear him criticize America much more often than other American presidents. And when it’s not in the context of an overwhelming number of statements about the exceptionalism of America, it sounds like he’s more of a critic than he is a supporter. You could be a patriotic American and be a critic, but then you’re not expressing that kind of love that we’re used to from a president.

RUSH: Steve Doocy then next said, “That kind of goes along with what the president wrote yesterday in the LA Times,” which we quoted to you moments ago. “He’s talking about ISIS which, as we all know, are Islamic terrorists, but he won’t say Islamic. But he says they have legitimate concerns. Put yourself in their shoes.” And Doocy’s right, he did, he said they’ve got grievances, legitimate grievances, and we must try to understand them.

GIULIANI: What I question about the president — maybe it’s even broader than that he doesn’t express a love of America enough, which I don’t think he does. I think he talks more about criticism rather than about what an exceptional country we are. At least I don’t feel that from him. Maybe I’m missing something. But I don’t feel that. I don’t also believe he expresses the love of Western civilization that he should, or an understanding of Western civilization, or what Western civilization has brought to the world. Its faults should be the footnote, and the headline should be what a wonderful country we are.

RUSH: Right. So he continues now here to clarify, and I think he’s saying what a lot of people think about Obama. He does. He’s known for apologizing for America. He’s known for acknowledging what he believes to be our mistakes that justify other people’s actions against us. He’s also enunciated American mistakes as a mechanism for us not having the right to criticize anybody else. There was a human rights seminar in the United States recently, it was a couple years ago, and it was during the time that the state of Arizona was trying to pass its own immigration law because Obama was not enforcing federal immigration law.

So Arizona passed its own law, and some State Department guy stood up and he actually said to a ChiCom diplomat, “Look, it’s kind of tough for me to come here and criticize you, the ChiComs, for your human rights violations when we have our own human rights violations problems ourselves.” And he was talking about Arizona’s immigration law. So the point is that Obama cites and his Regime cites America’s faults as an excuse for not citing the faults of other nations. It’s this behavior on Obama’s part that makes people think he’s got a chip on his shoulder about this. And I don’t think there’s any doubt about that. It’s the way he was raised.

So, anyway, this dinner last night, I said it was in honor of Scott Walker. What it is — I wish I could remember the third host. Steve Moore, who’s formally Wall Street and formally Club for Growth. He’s a Reaganite — it’s Art Laffer. It was Art Laffer and Grover Norquist and Steve Moore. They were the three hosts, but there were a lot of Reaganite type conservatives there. It was at 21.

Scott Walker was invited to come in and there was a roundtable discussion, and I’m sure that he underwent some sort of a quasi-interview process, as a lot of other Republican candidates will at the same dinner. Rudy was one of the attendees, and Rudy, I think, actually spoke. So Scott Walker was on CNBC this morning on their program Squawk Box. Becky Quick said, “You were at this dinner last night where Rudy spoke, and you were sitting just a few chairs away when he said that he didn’t believe the president loves America. He wasn’t brought up the way you and I were brought up. What did you think of what Mayor Giuliani said?”

WALKER: The mayor can speak for himself. I’m not gonna comment on what the president thinks or not. He can speak for himself. I’ll tell you, I love America, and I think there are plenty of people, Democrat, Republican, independent, everything in between, who love this country. I think we should talk about ways that we love this country and that we feel passionately about America, whether it’s about making sure everyone can succeed and live the American dream.

RUSH: (laughing) “I’m in New York. I’m used to people saying things.” (laughing) Okay, that’s Scott Walker. Now, let’s move to 21. Here’s is Ted Cruz, and he was on with Megyn Kelly last night. She said, ” You know what the presidentÂ’s argument is on this, which is there’s no reason to admit that we’re in a holy war because that gives the terrorists what they want. And he’s worried about alienating those Muslim countries that right now are willing to stand up and fight ISIS,” like Jordan. “Does it undermine our global effort of the coalition he’s trying to build to pit the world against Islam? Even the radical form of Islam?” 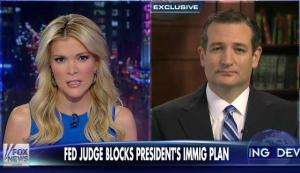 CRUZ: What undermines the global effort is for the president of the United States to be an apologist for radical Islamic terrorists. To analogize it to the Crusades from 700 years ago. President al-Sisi in Cairo gave a speech that was courageous. When he called out the radical Islamic terrorists — and president al-Sisi is a Muslim — and he said, “We Muslims need to stand up together against these radical terrorists who are perverting our faith and turning it into a mandate for murder.” Why don’t we see the president of the United States demonstrating that same courage just to speak the truth about the face of evil we’re facing right now?