Democrats Vow to Avenge the Victims of Judge Hanen

RUSH: Poor immigrants. Folks, it’s just bad out there. “Immigrants in US Feel Stuck After Judge Blocks Obama Orders.” This is a tear-stained AP story. “Brenda Armendariz, her husband and their two Mexico-born children were hoping to resolve their constant fears of being deported after President Barack Obama issued his latest executive orders on immigration.

Thanks to Obama’s executive orders, if none of the family members are convicted murderers or rapists they have no need to worry about deportation, and they probably don’t have any worries even if they are. “But now that a federal judge in Texas has blocked Obama’s efforts to protect 4 million more immigrants, her family is disillusioned and her children feel stuck as the president’s offer of temporary legal status moves frustratingly beyond their reach.” 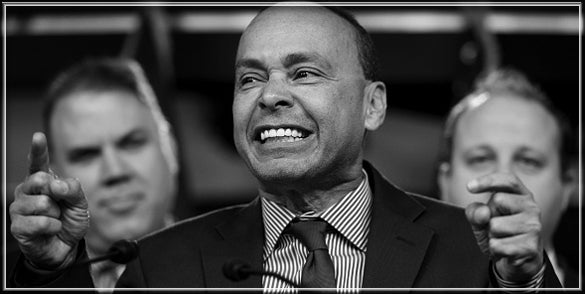 My friends, I can barely continue for the tears. Literally, my computer screen, my monitor was moistening up as I read this tale: “About a third of the immigrants now living in the United States illegally would be eligible for temporary protection if Obama’s latest orders are upheld in court, either because they were brought to the US as children or because their own children have legal status in the country.”

But as Judge Hanen’s injunction correctly noted, there is nothing temporary about Obama’s executive order. There’s nothing temporary about it at all because these work permits and Social Security cards will never be taken away and it’s gonna lead to voting rights. The point is they’re trying to drum up sympathy now because the illegals, they were ready to go, it was primed, it was ready to happen. Jorge Ramos had everybody revved up. It was almost going to happen and then this judge in Texas issues the injunction. And the day the injunction was issued everybody thought, “Well, it doesn’t matter. The regime will get in gear, head over to the Fifth Circuit and get this thing overturned inside of 12 hours.” And it’s still in force.

Now the educated thinking is that the judge actually went at this in a brilliant way and it sort of has the hands of the regime tied, because they totally ignored, they mandated by law, as far as that matters to Obama, they mandated by law public comment period. There must be public comment on matters like this and Obama obviated it. He just ignored it and this judge said you can’t do that and issued a stay. The regime now, they’re kind of stuck on how to go about reversing this.

So now it’s time for the stories of the pain and the suffering and the tears of the illegals who are primed to take advantage of Obama’s unconstitutional executive action. It’s now time to whip up sympathy and sorrow for the victims of this crackpot judge in Texas, who is a conservative Republican.

“Luis Gutierrez Predicts Unprecedented ‘Militancy’ Among Immigrants After Amnesty Injunction — On Wednesday, Rep. Luis Gutierrez (D-IL) predicted that a federal judgeÂ’s injunction against President Barack ObamaÂ’s temporary –” There’s nothing temporary about Obama’s amnesty program. Can we just establish that off the top? There is nothing temporary about it. But Luis Gutierrez predicted that this “will activate an unprecedented ‘militancy’ in the immigrant community that will drive them to the polls against Republicans.”

And they said to him: What do you mean by militancy? Are you talking about civil unrest? Are you talking about riots? And no, no, he began to walk it back immediately. He said (imitating Gutierrez), “No, no, I mean, it may sound like a threat to you, but I, Luis Gutierrez, was not issuing a threat. And I was not engaging in a mild form of terrorism.”

We’re just misunderstanding Gutierrez’s nuance here when he says unprecedented militancy. Luis Gutierrez has had this counted as done and in the bag ever since last November. Luis Gutierrez has already convinced everybody that he talks to that it’s a done deal and he’s running around making plans to assimilate. No. There is no assimilation. He’s been making plans to get them in, get them registered, get it all done and I’m sure voter registration is part of it, and it hasn’t happened yet and he’s getting embarrassed.

Now he’s trying to make us think that the anger is building and it’s building and it’s going to explode at some point, and when people said, “What do you mean militancy? Are you threatening civil unrest?” He said (imitating Gutierrez), “No, no, I’m just saying the Hispanics are livid and they’re going to really take it out on you at the next election,” is what he meant.