RUSH: Here’s Judge Napolitano, who was on Fox last night, The Kelly File. Megyn Kelly asked the judge, “Is she in trouble legally?”

NAPOLITANO: She’s in a lot of trouble legally. If she retained on her personal e-mail account — using the Clinton server at her home or near her home in Chappaqua, New York — classified materials, classified documents, she arguably violated the same statute that General Petraeus has agreed that he will plead guilty to.

NAPOLITANO: That’s a misdemeanor. It’s not a felony. 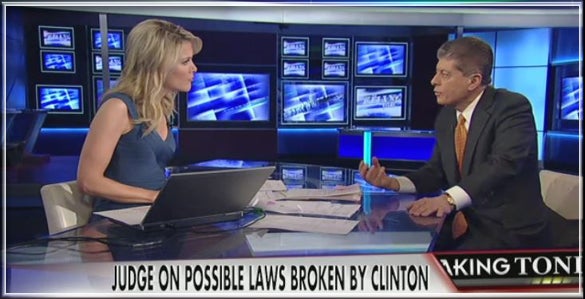 NAPOLITANO: The other way that she’s in trouble is a person who knowingly and willfully destroys or conceals government records. This is a felony punishable in jail by up to three years and — are you ready for this? — disqualification from holding public office under the United States of America.

RUSH: Yeah, well, that used to be. That’s in the Constitution. That doesn’t matter as much anymore. They’ll find a way around this felony thing. Well, they’re finding a way around illegal immigration. Obama’s talking about executive action for raising taxes. What’s so hard about seeing to it that a felon could run for office someday? Hell, they’re trying to legalize the felon vote now.

But now this Petraeus comparison, this is fascinating. This is interesting to me, ’cause Petraeus did plead guilty in order to avoid a trial. But what Petraeus did, is Petraeus actually shared the classified data with a gorgeous woman (in some people’s minds), mistress with whom he was having an affair. Now, did Mrs. Clinton share any of this data, this classified data with a gorgeous woman with whom she was having an affair? Why bring up the Petraeus angle on this?

RUSH: Now, there are similarities, and not limited to a gorgeous woman with whom you’re having an affair, between Hillary and General Petraeus. Some of the similarities are Petraeus pled guilty to keeping a few classified documents at home on his home computer. Hillary Clinton probably, possibly, had hundreds of classified documents on her home server. I mean, she wasn’t leaving ’em at work, for crying out loud. One of the reasons to do this is secrecy. You know she had classified docs on that server, and Petraeus pled guilty because he just had a few of them that he let his mistress see.

And Petraeus, if I’m not mistaken, wasn’t Petraeus brought down by e-mails? There’s a third-party in Tampa, some woman in Tampa, but there were e-mails involved in tripping up Petraeus. Yeah, Paula Broadwell was the gorgeous mistress of Petraeus. She had sent these threatening, well, maybe harassing e-mails to another woman in Tampa who apparently had designs on Petraeus, too, and family, friends of Petraeus, so forth. Anyway, they became known. So there are some similarities here.

RUSH: This is Vickie in Brooksville, Kentucky. Welcome to the EIB Network. Are you snowed in where you are?

CALLER: We’re up about 65 miles from Cincinnati, south and east, and it is horrible. We’re in a snow emergency. Nobody in the whole state is allowed to be on the roads except for emergency vehicles, so it’s great.

RUSH: Well, do you have plenty of canned goods stocked up?

CALLER: Oh, of course. We’re country people, so we know how to survive.

CALLER: If nothing else we got beans to cook.

CALLER: Yes, sir. It’s an honor, and I thank you very much for taking my call. I have two things to talk to you about. Hillary, not only did she use this private server for her e-mail in government business, but she had Mrs. Weiner and several other of her close associates use that e-mail only. So it’s not only her, but it’s the communications between her and Mrs. Weiner, her assistant that could very well be government business. I just find her the most deceitful, dishonest, horrible human being, shrill, awful, I can’t find enough words. And it bothers me a great deal.

RUSH: Yeah, but, see, here’s the thing. I understand what you’re saying, but there’s nothing new, there’s nothing new about that. And I’m just wondering why it is that this e-mail business has got everybody so in a tizzy. Normally the Democrats would be circling the wagons to protect her on this. Normally they’d be saying, “You know what? She was ahead of the curve here. Hillary Clinton was taking steps beyond what were necessary for security and privacy for the State Department. She was ahead of the curve. She should be applauded.” That’s the way they would normally handle this.

CALLER: That’s exactly right. I’ve been thinking about it since this hit the news, and I was trying to figure out what is their game, what is the point? Because all of a sudden the press started saying — 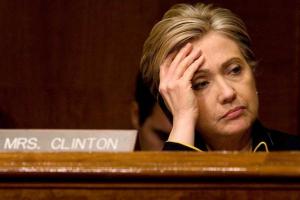 RUSH: They don’t want her for some reason. I’m telling you.

RUSH: They don’t want her.

CALLER: I know, and I don’t understand because before that the press were all agog, you know, the mouths hanging open, it’s Hillary, it’s Hillary, and all of a sudden they changed their mind? Wait a minute. Something’s wrong here. So that’s how I feel about it. I don’t know what the heck is going on, and the funny thing about it —

RUSH: Let me ask you a question. It’s kind of hard for you to be objective, I know, but I want you to try.

RUSH: No, no, I’m being serious. There’s not a trick here. I’m genuinely interested.

CALLER: Go ahead and hit me.

CALLER: Because the first thing that popped into my head was that she’s hiding something.

CALLER: She’s trying to hide something. She was trying to divert everything so that she would have the capability of getting rid of it at any point.

RUSH: Okay. Well, that’s good. Then you immediately thought of that, then?

CALLER: That was my very first reaction.

RUSH: That’s exactly right. The reason you would do this, as I so astutely said in the prior segment of the program, the reason you do this is that when you delete it, it’s really gone. It’s not true with a Gmail e-mail address, if you use any of the commercial ones, Yahoo, Gmail, AOL, if they still do e-mail. I think they do. ICloud, I don’t care what it is. Your e-mails never go away. They are always on those servers. They own the e-mails, not you. It’s not your server. You’re leasing space. You may delete the e-mail from your IMAP folder, you may delete it from your server, you may delete it from your computer, but it’s still on theirs.

When you have your own server — and I don’t care where it is. The idea, by the way, the server is in her house, not that big a deal. Physical proximity is it’s easier, it’s one thing, but she could have this thing off site anywhere. It would just be another layer of transmission that would be subject here that she would have to account for. But the bottom line is that when she deletes it, it literally is gone. By the same token, when it’s on her server, it’s nowhere else, other than people she’s e-mailing back and forth, which, that’s another aspect.

She’s e-mailing the normal list of people that she would be e-mailing with if she were at the State Department and using that server and that domain. Every one of those people had to see that her mail was coming not from the State Department servers but from her own, and this would include the media. I mean, you know she’s e-mailing somebody in the media. They had to know this long before this pops up, and just like you, they had to know what it meant. Nobody said anything here, until now, so something could trigger it. Anyway, Vickie, I appreciate it.