But it is amazing to watch. The Democrat media continues to pile on Mrs. Clinton. I mean, it’s close, at least in my memory and in my perception, it’s not, but it’s close to being unprecedented. I mean, they are all lined up. Anybody that is anybody on the left in the Drive-By Media, just really aiming at her.

I still have to chuckle over this, of all the things that Clinton — in fact, Ron Fournier, who has I think written now five or six pieces on this, I don’t know if he’s got guilt or what have you, but he had a piece on Sunday. He said, you know, this e-mail stuff, this is not even really what this is about. This is about pay for play. This is about all of the money the Clinton Foundation is raising from dubious characters, pimps, purse snatchers, muggers, you know, world leaders all over the place.

That’s the real scandal here, who’s donating and what are they expecting for the money. I mean, she’s sitting secretary of state, and they’re donating all of this money, and it’s private, and everybody assumes that she’s gonna be president. What do these people expect for their money? That was his primary focus. 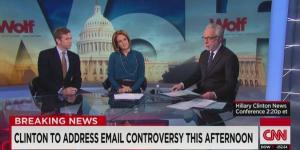 RUSH: As always it comes back to Mrs. Clinton. On the golf course yesterday, people were asking me, and I always get this, “Who do you like in the Republican race, Rush, who do you like for the Republican nominee, who is it, who is it?” So I told ’em who I thought, and they looked at me kind of, “Hmm, interesting, interesting, hadn’t thought of him.” Scott Walker, is who I told ’em. And I had to make his case for ’em. They’re looking at the traditional names: Jeb, Romney get back in, Ted Cruz. I love Ted Cruz, you know that, and I love Rubio, but I had to make the case for Scott Walker. They didn’t know it.

And these are donor types, folks. Not the donor class that wants amnesty. These are conservative donors and they just didn’t know. That doesn’t mean to get scared by that ’cause Walker is continuing to lead the polling data, and he just signed into law — (laughing) — in Wisconsin, oh, my God, is Obama ticked off. Oh, he’s madder than when he found out Hillary was using a private e-mail server. He is so mad at Scott Walker. Scott Walker signed a bill into the law in Wisconsin that gets rid of mandated union dues, and you know what that means, that gets rid of mandated Democrat Party donations. And Obama is livid.

So I mentioned the name Scott Walker, and I always have to make the case for it, and after I do, they start saying, “Oh, yeah, yeah, yeah, yeah, yeah, cool.” And what I find interesting about that, folks, is that all of us conservatives want somebody to, what? Fight back, right? No matter who we are, we’re sick and tired of all of this: “Well, you know, we can’t oppose Obama, it will upset the independents. And we can’t be critical of Obama or the media will kill us.” I mean, Scott Walker has been attacked by these people like every other Republican has and maybe even worse. He’s had to win three elections out of four, four years, and he did, and he’s implemented his agenda.

I mean, you’ve heard me go through this, but I find it fascinating. I have to make the case for the guy for a lot of people I run into who don’t know it. Now, that’s his job, by the way. That’s gonna be his responsibility in the campaign, to make himself known and to make his resume known. Not up to me or anybody else. 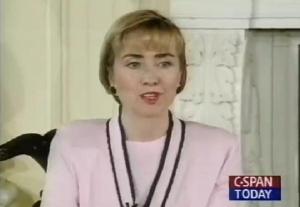 So she’s gonna do this press — she got a speech at the UN. She’s obviously using the Claire Underwood model here from House of Cards as a means of extricating herself from problems. When in doubt go to the UN and promise to give away some American money, and you will find newfound love. And it’s after that — her speech is at 1:30 at the UN. These times are ballpark. And after that she has her press conference with the media about the e-mails and the servers. 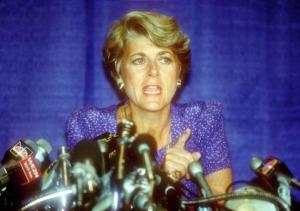 RUSH: Last time I remember anybody having to do a press conference like this, Geraldine Ferraro, when she had to go out there and answer questions, explain why her husband was so mobbed up. Remember that, Snerdley? Now, this is a little bit different ’cause in this case it’s Hillary who may be mobbed up. (interruption) Well, the Weiner press conference might be, but he’s a guy. He’s a guy. That was about what makes him a guy. This is about Mrs. Clinton and bribes. I mean, I don’t know if they’re gonna get into the money to the foundation. That really is where this should end up going, and that’s why this stuff was done in private, with a private server.

I have some questions nevertheless. By the way, about that Geraldine Ferraro press conference, let’s not forget that she ended that and the media gave her a standing O. Her husband was mobbed up, so it was said. She had to go out and explain why she didn’t divorce, stood by the guy, whatever that meant for her candidacy, what it might mean for the Democrat nominee was Walter Mondale. And she got a standing O from the media after that. But they weren’t biased back then, of course. Ahem. In this case, the media looks like they’ve got all their ammo aimed at Mrs. Clinton, but we will just have to see.

Now, this means that none of the reporters had time to get credentials for Hillary’s press conference. So it looks like she’s only gonna have to answer questions from the United Nations reporters, the beat reporters assigned to the UN from wherever, and they’re dweebs at best. These are people that think the UN is church. So I don’t know how many traditional Drive-Byers are gonna even get into this press conference, but that would be one way of controlling it. My questions coming up.

RUSH: Okay. The questions that I would ask Mrs. Clinton this afternoon were I to get credentialed and be there: “Mrs. Clinton, how many scandals make a pattern?”

“Mrs. Clinton, if it was necessary and appropriate to have a secret server as a cabinet secretary, secretary of state, do you think you’ll really need one as president, right?”

“Mrs. Clinton, when Chelsea was working for NBC News, did that influence Brian Williams from investigating you and the suspicious donations to the Clinton Foundation? In other words, did NBC hiring Chelsea give you some insurance that NBC would not look into your activities?”

“Mrs. Clinton, if you have nothing to hide, will you turn your servers over to Judicial Watch, whose issued a Freedom of Information Act request for them?”

“Mrs. Clinton, explain how your server was less vulnerable to hacks than government servers.”

“Mrs. Clinton, was it a hard choice not to have an open press conference about this?”

“Mrs. Clinton, how do we know which politicians are susceptible to bribes? Just have to ask them?”

“Mrs. Clinton, is buying access just something the Republicans do but nobody else? If you find legal equivalency with Jeb Bush, Mrs. Clinton, the question: When was Jeb Bush secretary of state?” You know, she cited Jeb. “Hey, Jeb had a private –” Yeah, but he’s released them all, to boot.

“Mrs. Clinton, I see that you were absent from Selma this past weekend. So you weren’t no ways tired?”