RUSH: Now, I know a number of you people think that I am in the tank for Apple. And I’m not, but you think I am. The Stick-to-the-Issues Crowd routinely erupts in anger when I either talk about Apple or golf or what have you. I’m not in the tank for Apple. But people think that I think Apple can’t do anything wrong, which is not the case at all. I just happen to love certain things they make. I literally actively love certain things they make. They have enhanced my enjoyment of life incredibly.

But I’m not in the tank for ’em. I don’t think they’re above criticism, and they do a lot of things outside their area of expertise that makes absolutely no sense to me, some things they stand for and all that. But — (interruption) Well, that’s what I was getting at. You know, I happen to know where my syllables are going. If you would just be patient in there and let me get — (laughing) “How about the new watch? How about the new watch?”

See, I’m not in the tank. I couldn’t care less about this watch right now. Maybe in two years I will. I couldn’t care less about it. Look, I don’t understand the marketing on this watch. What I think doesn’t matter. I’m just sharing with you my thoughts on this. They just came out with the iPhone 6 and 6 Plus, both featuring larger screens than Apple has ever made and those phones are selling like never before. They’re even gonna have a record second — they still cannot make enough of those phones to meet the demand.

That’s never happened with any iPhone release prior. By the second quarter they’ve always caught up to demand. They haven’t caught up, they can’t make their second — this is their second fiscal quarter. It’s the calendar first quarter. They can’t make as many phones as they could sell. They could probably sell 58, 60 million phones this quarter. Last year, the same quarter with the iPhone 5S they sold like 38 or 40 million, and they’re on par to sell 58, 60 million, except they’re only gonna be able to make 52 million. 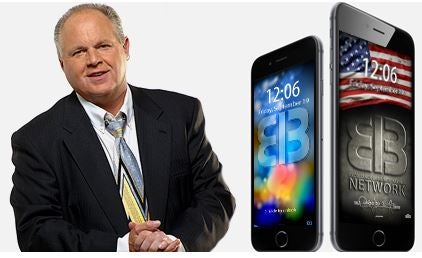 So my point is, they have these more popular than ever iPhones, the iPhone 6 and the 6 Plus, because the screens are bigger. The display size is bigger, 4.7 inches versus four inches, and then the five and a half iPhone big boy. Okay, so in the face of all that, one of the ways — it’s not the only way — one of the ways Apple’s marketing the watch is to acknowledge that it can sometimes be a hassle to pull that big iPhone out of your pocket or your purse. And I don’t think it’s ever a hassle. I love my iPhone. I would take it everywhere.

There are certain places you’re not allowed to take a phone. I sneak it in anyway. But the phone is not an annoyance to me. But one of the ways they’re selling the watch is, yeah, you put our watch on your wrist and you’ll have to use your phone a lot less. What, the iPhone is an annoyance now? The iPhone is a problem? I just don’t understand this marketing. Other people fall for it, they think it’s great. “Yeah, I really don’t like having to pull my phone out of my pocket every time I get a notification. Screw that. If I can see it on the watch, all the better.”

Okay, fine, if it floats your boat, fine and dandy. When I’m driving the phone is never in my bag, is the point. Now, look, I can see there are gonna be use cases for the watch. I already told you on the golf course where they’re not permitted to have phones, but the course is gonna ban the Apple Watch if they find out people are walking around looking at the watch the whole time.

I have not ordered a watch. I’m not gonna order a watch. You’re gonna be able to make a phone call on the watch. Well, you’re gonna have to have your phone nearby, so it may obviate golf course usage anyway ’cause you’re not allowed to have, on certain courses, the phone. And if you can’t have the phone with you at first you’re not gonna be able to use a lot of things on the watch.

Anyway, none of this is the point. I’m just sharing with you I don’t understand the marketing. Point is the New York Times ran a story. (interruption) I’m not sacrificing my role as a leader of what’s good tech. You’re not gonna need me with a watch to tell you whether it works or not. People are gonna figure that out on their own. I am gonna be interested to see what kind of demand there is for it. That’s the one thing I’m not sure of.

Now, Apple products have a sort of built-in — they have so much loyalty in their fan base that people are gonna buy it just ’cause it’s made by Apple. But beyond that, I am interested to see how popular it becomes. But, here, you talk about absurdity, earlier today we had a story that the United Nations Commission on the Status of Women in the world declared that the most discriminatory nation on earth against women is Israel because of the way they treat Palestinian women. I mean, it’s absurd.

The same newspaper earlier this week had a serious story claiming that the new Apple Watch will give you cancer. It’s journalistic malpractice. The New York Times cancer article is what everybody’s referring to it as. An article in the New York Times by their tech writer, Nick Bilton. It was originally titled, “Could Wearable Computers Be As Harmful As Cigarettes?” The headline was changed to: “The Health Concerns In Wearable Tech.” Really, the first headline of the story was, “Could Wearable Computers,” i.e., a watch — and, by the way, Apple’s not the first with a watch. Samsung came out with one. Pebble has one. A whole bunch of Android people tried their hands at one. Apple’s not the first.

There was never a story about any Android watch giving you cancer. Now all of a sudden Apple’s on the verge of releasing theirs “Could Wearable Computers Be As Harmful As Cigarettes?” Do you people that read the New York Times, do you realize how uninformed and ill-informed and misinformed you have become? There are people, the New York Times, it’s the Bible to them. It is unchallengeable and this is the height of irresponsibility. “Could smart watches be raising your risk of cancer? Decades of research that could speak to the question.” But this guy at the New York Times ignored all of it.

How many stories have there been about your cell phone causing cancer and then, uh, sorry, never mind, no evidence. Forget all of that. And now we’ve got a story that the Apple Watch is going to cause cancer. It’s as harmful as cigarettes? The strongest evidence that’s cited in the New York Times story comes from the International Agency for Research on Cancer, which announced in 2011 that it considered cell phones as possibly carcinogenic to humans, possibly, and that’s the research used to form the basis of this story.

The New York Times writer, Nick Bilton, mentions the International Agency for Research on Cancer announcement as the most definitive and arguably unbiased result in this area. It’s not even a scientific result. You try to understand, okay, what’s the motivation here, why in the world does the New York Times want to destroy Apple for? What did Apple do or not do to the New York Times to cause this? See, this is not a news story. It’s not an article. This is a flat-out hatchet job.

Now, as I’m saying, I’m not doing this because I’m all-in for Apple, as I’ve just told you. Right now I couldn’t care less about the watch. When a new iPhone’s coming out, I’m obsessed. I want to know everything. I can’t wait to get it, play with it, all that. The watch, it hasn’t hit me that way yet. It may, by the time they get to the second or third rev of the thing. But, I don’t know. A one and a half or 1.6-inch screen — he-he — after I have just been told I need to go out and buy this five-and-a-half-inch screen, I don’t know, the marketing is puzzling to me, but there’s no way that the thing can cause cancer, and I had to mention this. Because so many people take what the New York Times — if the Times is willing to write drivel and bilge like this, I think everything they write has to be considered suspect.

These are the people that are biggest proponents of climate change and global warming and the dangers the Tea Party. It’s rotgut. I don’t know how a story like this passes the editors. Where is the common sense? And where were the stories before the Apple Watch was released? It’s not by any stretch of the imagination the first.