RUSH: This is Texas Tribune website. TexasTribune.org. Again, Ted Cruz being interviewed by a reporter there named Jay Root, and during a conversation about climate change, question came up. “You don’t believe in global warming, Senator Cruz. Are you out of step with most young voters on this?”

CRUZ: If you look at global warming alarmists, they don’t like to look at the actual facts and the data. The satellite data demonstrate that there has been no significant warming whatsoever for 17 years. Now, that’s a real problem for the global warming alarmists, ’cause all of the computer models on which this whole issue was based predicted significant warming, and yet the satellite data show it ain’t happening.

RUSH: Now, that’s right on the money. That is so right on the money, that I bet you the young people being talked about here won’t believe it. Do you realize…? This has been a cause of mine for 25 years. Actually longer than that. It’s been a cause of mine since all the way back when I was in Sacramento and I was watching the Sunday show with Brinkley on it and I first heard about this with some scientist named Oppenheimer telling us we only had 20 years. We couldn’t prove that global warming was happening yet.

Back then what they were saying was the best way they illustrate it, to try to scare people, is use Southern California, and they said, “Imagine everybody on a typical summer evening firing up their barbecue pits at the same time to grill hot dogs, hamburgers, and steaks — and vegetables for the vegans. Can you imagine all of that car coal exhaust, all of that carbon? You’re telling me that doesn’t affect the atmosphere?” And people said, “Whoa, my God! I never thought about it that way.”

George Will even fell for it. He was using that as an example. The first I heard it was Oppenheimer guy. Alan Oppenheimer? That probably wasn’t his first name, but he’s some Ivy League guy, and he’s wringing his hands about global warming and he’s saying, “Well, we can’t firmly prove it yet but we only have 20 years, if we’re right.” This is 1984, folks. We’ve blown past these 20 years like they didn’t even happen. “We’ve got 20 years to get this right!

“If we do not immediately embark on policies,” which to him were raising taxes on carbon to eliminate carbon emission. “If we don’t do this we are going to see sea levels rise,” and all that crap that they’ve been predicting by now was gonna have happened in such a bad way that we would all be sunk. That’s the first time I heard of it, and I didn’t buy it then because the guy didn’t have any evidence, and he admitted it back then. He said, “All we have are the computer models that are telling us this,” and that’s all it’s ever been.

There has never been any evidence.

All there has been is theory.

Who knows what kind of data has been put in here, but it can’t be real. But forget that. Forget that. Just let’s not complicate it. There is no evidence of global warming, man-made. There is no evidence of it. All it is is theory. The greenhouse effect. That’s why they use the barbecue pit example. People were able to envision all of that exhaust, those fumes and emissions from all those barbecue pits. You can’t really see it, but it comes out as smog.

“It’s coming up out of everybody’s barbecue pit, millions of ’em at the same time! Oh, my God, yeah, that could really affect us!” And it was easy to persuade people. But it was all bogus. You can boil it down to the basic: There is no scientific evidence of man-made global warming, and all these predictions, from 25/30 years ago predicted that by now, we’d be so far into this that it would be irreversible, and the evidence would be conclusive. There isn’t any evidence yet, and it’s about 30-plus years!

Because there isn’t any science.

It’s nothing more than computer models.

They are the sole source of every prediction about global warming. So Cruz is pointing this out. He gets a question, “You know, you are not on the same page as young people about this,” and you heard his answer. He was factually, totally, 100% right about it. The great fear I have is, that doesn’t count for much with a large segment of the population. The facts don’t really matter to a lot of people. In the latest Gallup poll — and, by the way, that’s not new.

Gallup has been doing this poll since 1989, and it basically hasn’t change. Global warming has never been near the top of people’s great concerns. In the Gallup poll, it’s always been near the bottom. In this latest one, it’s at the bottom of things people are worried about. It is at the bottom of the list that people think is a real thing to be worried about. So facts? Yeah, I think we’ve been success. But it’s taken 25 years to beat this stuff.

Twenty-five years of every day, practically, because that’s how frequently the proponents are out pushing it. It’s a great illustration. To stop this stuff, you have to fight it every day and you never totally beat it ’cause they never go away. Now, here’s the next one. After that answer, the same guy, Jay Root, at the Texas Tribune website, asks, “But what if there is something to it, Mr. Cruz? What if there is something? What if there is global warming? Why not do everything we can to reduce our carbon footprint? Why not have some humility about it?” 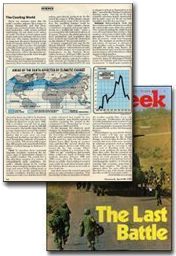 CRUZ: I read this morning a Newsweek article from the 1970s talking about global cooling, and it said, “The science is clear! It is overwhelmingly! We are in a major cooling period, and it’s gonna cause enormous problems worldwide,” and the solution for all the advocates in the seventies of global cooling was massive government control of the energy sector, of our economy, and aspects of our lives. Now, the data proved to be not backing up that theory. So then all the advocates of global cooling suddenly shifted to global warming.

RUSH: And he wasn’t through. He continued.

CRUZ: The global warming alarmists, anyone who actually points to the evidence that disproves their apocalyptical claims, they don’t engage in reasoned debate. What do they do? They scream you’re a denier; they brand you a heretic. Today the global warming alarmists are the equivalent of the flat-earthers. You know, it used to be it is accepted scientific wisdom the earth is flat, and this heretic named Galileo was branded a denier.

RUSH: The most interesting part of this, to me, is this question. “But — but what if there is something to it, even though there’s no evidence? What if there is something to it? Why — why not do everything we can anyway and have some humility about it? Why — why — why be so damn sure of yourself?” That’s what it really comes down to. “How can you be possibly be so sure of yourself? Why can’t you allow…? Why can’t you be humble about this and maybe you’re wrong? Maybe you’re wrong! Maybe some other people have a point. Why can’t you…?” ‘Cause they’re wrong, they’re full of it, just like you are, buddy, and here are the reasons why.

Now, I love hearing this kind of stuff. I really do.

RUSH: The guy I was talking about that I watched on the Brinkley show back in Sacramento 1984 (and it was This Week with David Brinkley), his name is Michael Oppenheimer. He is a professor of geosciences and international affairs at the Woodrow Wilson School of International Affairs, and he’s also at Princeton, and he’s part of the UN’s global warming apparatus. That’s who the guy is. He’s still around, and he’s still as crazy. It’s like Paul Ehrlich.

He’s been wrong about virtually everything and is still a guru. Paul Ehrlich, he goes back to the seventies. He’s still a liberal icon. Ehrlich is the guy wrote the book called The Population Bomb, who said (paraphrased), “By the year 2000 there are gonna be too many people on earth to all be fed. We won’t have enough water and enough food and cleanliness and hygiene. It was just not gonna be possible for the earth to support the number of billions of people,” whatever he said.

It was apocalyptic, and he had disciples. I remember one of the executives at the station I worked for in Pittsburgh, which was at the time owned and operated by ABC, KQV-1410 AM 1410. He came in waving this book around. “You’ve gotta read this, gotta read this,” and I said, “What is it?” “It’s The Population Bomb. It says we’re all dead!” Except he believed it. It was this panic apocalyptic stuff, and people are drawn to that. There’s a psychology to that, too. But, anyway, it’s all been disproven now.

He’s still, I think, a professor emeritus at Stanford and still has all the respect that he’s ever had. He hasn’t been right about anything. He made a bet with Julian Simon, a scientist who disagreed with him about everything. Simon made him a bet. They selected some minerals, natural resource material, and Simon bet that by the year 2000, they would be in more abundant supply than ever and cost less. Ehrlich said, “Oh, I’ll take that! Hell, we’re not gonna have any of that stuff by 2000.”

Simon won the bet hands down, every aspect of it.

But you can’t say that the prediction is scientific.