Frank Underwood and the One-Term Pledge

This is Kevin in Fort Myers, Florida. Great to have you with us, sir. Hello.

CALLER: Well, thanks, Rush. I’m honored to be hitting the third position in the lineup today. Thanks.

RUSH: Great to have with us, sir. Thank you very much. Third position is important, too.

CALLER: Yes, it is. I wanted to talk about going back to the founding roots with a thought. I mean, the original Founding Fathers were essentially farmer, public servants. And they were looking to serve and go home. I want to steal this page from House of Cards and President Frank Underwood and why isn’t the Republican Party as a differentiator pledge to go one term in this election because they don’t want to be bothered with the cost and the distraction of running for reelection, they want to do something to govern? 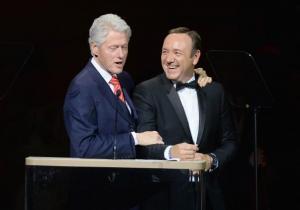 RUSH: I’m gonna answer your question, and there’s a great answer to it to illustrate why it’s a horrible idea. And I will tell you here. But I first need to set table. For those of you that have not seen House of Cards, Frank Underwood — you know, there’s a reason you should watch it if you haven’t. You want to talk about depravity, you want to talk about utter, sheer depravity, watch it and then remember that Bill Clinton just said earlier this week that 99% of it is true to life in Washington. Clinton’s comment doesn’t mean anything if you haven’t seen it. But it’s depraved, it’s debauchery, it’s douche baggery.

I’m telling you, it reaches the depths of depravity like few TV shows have rivaled maybe only by Ray Donovan. It’s a good show, don’t misunderstand. But this president, Frank Underwood — look, I don’t want any spoiler alerts. It’s a 13-episode series, season three, Netflix. They release all 13 on the same day in February. But you should watch it if you haven’t, and then after you do, Bill Clinton’s out there, he and Spacey are good buddies and Clinton’s out there (imitating Clinton), “Hey, you know, Kev, that show you’ve got there, that House of Cards, 99% of that stuff happens, I’ve done it myself. Half of that stuff happens all the time in Washington. It’s maybe the best damn political show on all TV about what happens in Washington, especially when I’m there.” You watch it having heard that. And I’ll answer it in a minute.

RUSH: Okay. Why will a one-term pledge not be effective? A one-term president — particularly a president serving his first term saying it’s going to be his only term — is immediately a lame duck. The opposition party can simply freeze everything. It’s just like a second-term president becomes a lame duck almost immediately after being inaugurated. Now, there are some possible mitigating factors. A president that promises to only serve one term like Frank Underwood never meant it.

He was always gonna run for reelection. He was lying when he said he was only gonna serve one term. Bill Clinton admired that. Harry Reid admired that. Frank Underwood was lying. The possibility that the pledged one term is a lie would mitigate against the opposition party treating the one-termer as a lame duck. But if it’s a serious pledge to only serve one term, the opposition knows all they’ve gotta do is play Freeze the Donkey, and they can prevent a one-term president from being empowered.

The supposed power that you acquire as a one-term president is that you can let it all hang loose. You don’t have to be worry about reelection, so you can do the truth. You can say the truth. You can enact policy that you would never enact. You can prepare it and enact something you would never do if you had to get reelected. So in Underwood’s case (spoiler alert coming up) what Democrat president Underwood did, is he promised to eliminate Social Security and Medicare.

Claiming: “We can’t go on paying people who aren’t productive.” He sounded just like a conservative, by the way. He’s a full-fledged Clinton Democrat or Obama Democrat, promising to end — not cut, end — Social Security and Medicare. And not give the money back to the taxpayers, but instead take that money that’s being “wasted” on the elderly and put it in a federal job-creation fund. He was gonna create massive new jobs in the private sector using that money.

One of the things that Frank Underwood, fictional president in House of Cards promises is: Any private sector business that accepts money from his federal job-creation fund will be given $45,000 toward every person he hires. So the first $45,000 of salary will be paid for by Frank Underwood and Democrat Party (i.e., Washington) under his plan. The theory was, “Who in their right mind would ever oppose this?” Because the theory was that everybody knows Social Security’s insolvent.

“Everybody knows Medicare’s broke; we can’t go on. Let’s finally admit it! Let’s eliminate it, and let’s focus on jobs, and let’s focus on a booming economy. A booming economy will raise all boats, and it’ll help cover the expenses for the elderly who are having their Social Security taken away.” In the show, the elderly never complain. That’s the one thing that didn’t happen. The AARP, you never heard from ’em. Underwood would not survive three day in the real world proposing this.

But he did, and… Oh! When he was opposed, when he was stopped from doing this, what Underwood did is he found a… It was Obamaesque. He read the bylaws and the statutes that structure and built FEMA. He went out and, since Congress would not appropriate the money for his big jobs fund, he basically took it for Washington, DC, only. He couldn’t take enough for the whole country, so he started his pilot program to show how this would work, in Washington, DC, only.

He took the money from FEMA to do it. Everybody said, “God, Frank, you can’t do this! What if there’s a hurricane, if there’s another Katrina? Oh, my God, you’re robbing the fund! You’re robbing the relief fund.” He says, “I’m gonna roll the dice there isn’t gonna be a hurricane.” Well, of course there’s a hurricane! (laughing) It’s predictable. It turns north at the last minute and it doesn’t hit, but everybody’s panicking ’cause Underwood’s robbed FEMA of its money in order to pay for his program.

His jobs program works in DC, and the elderly in DC don’t mind that their Social Security was just snatched out from underneath them. But the theory is that a one-term president is immediately a lame duck and the opposition doesn’t have to give him anything because they don’t have to worry about him continuing, and that he ultimately has no power. Now, there are of course exceptions to every rule. Obama is supposed to be a lame duck now.

I think part of the problem in Washington is that everybody there behaves according to formulas. “You can’t win without the independents. You can’t win if you’re a Republican talking about the social issues. You can’t criticize Democrats or it’s gonna anger the independents and they’re gonna leave you and join the Democrats.” All these cockeyed, crazy formulas. One of the formulas is that a second-term president’s a lame duck because everybody’s focused on the next president.

And the current president’s forgotten about, can’t do anything.