I’m telling you, this Iran business, this framework agreement and all this? The real reason Obama is spending all this time and attention on it is to erase from the equation Senate involvement.

The Senate is involved constitutionally in any treaty or deal like this. There’s a bill. Bob Menendez is now under Justice Department investigation. He’s been charged with all kinds of chicanery. He’s a Hispanic Democrat, supposedly untouchable, but he had the audacity to say that Obama’s nuclear deal is doing nothing but helping Iran. Well, it’s one thing for a talk show host to say that, but for a Democrat senator to say that? 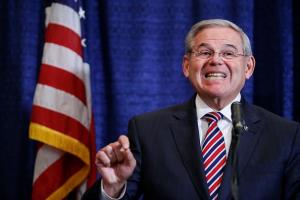 So Menendez’s days are over as a senator. Obama’s taking him out, using Eric Holder and the DOJ to do it. But Menendez has a bipartisan bill in the Senate with Bob Corker of Tennessee that attempts to put the brakes on anything Obama’s doing in Iran and make sure that the Senate has a role in whatever they end up negotiating. Obama is trying to get around that and ace these guys out of having any role and making sure that that bipartisan bill is worthless.

Just one of the times ways he’s doing that is trying to impugn Menendez by having him charged with high crimes or whatever the hell they say he did. All he… (interrupitn) Corruption, yeah. He flew on a donor’s jet down to wherever, the Dominican Republic. As though no other politician’s ever flown on a donor’s airplane. Mendendez is not backing down, saying he’s not gonna be intimidated this way. But they’re setting this guy up. Remember Bob Torricelli? It’s almost…

We’re not that far from getting the Bill Clinton phone call that Andrew Cuomo got, warning him to back out of anything he planned to do at that moment and reminding him, “You see what we did to Bob Torricelli? Ever hear about Bob Torricelli, Andrew? You ever seen him lately? You haven’t even seen him, yeah? You don’t even know if he’s still alive, do you, Andrew?” So they’re trying to deemphasize and delegitimize and basically get rid of Menendez and his piece of legislation.

So it sounds to people like one-term is a great thing because you think, “If I have no worries about being reelected, I could be totally honest and propose anything, and the Senate and the House will have no choice but to go along with it because the American people are gonna be rabidly behind me and totally supporting is me.” It’s not guaranteed to work. It’s attractive. It’s an attractive suggestion to people.

Now, the point that I was trying to make here, didn’t finish the thought, actually. Obama’s speech yesterday in the Bergdahl garden was meant to make it easier for Democrats to vote against the Corker-Menendez bill. He goes out there and he sells it (imitating Obama), “We got a deal, we got a deal, and if they cheat, we got a mechanism to catch ’em,” blah, blah. “It’s done. I handled it. I got it. We’re on our way, babe. We got our framework. They’re not gonna have a nuke.”

The Washington Post even recognizes it’s BS, as does anybody reasonable. All of that was designed to make it easier for enough Democrats in the Senate to vote against the Corker-Menendez bill so that there would not be enough Democrats to override an Obama veto of it. That’s what his comments yesterday were aimed at. And if I have time I’m gonna circle back to that.

“Hundreds of Iranians took to the streets in Tehran early Friday to celebrate a breakthrough in talks with the West that may end the country’s 12 –” so, once again we have a news story that attempts to project upon Iran the same democratic behavioral principles that we have in the West, and Iran is not a democracy, it is not a republic. It’s an Islamic republic in name only, but it is not a nation of individual freedom. It is not a nation with a constitution. Elections are prima facie. They are not legitimate, just like they never were in Iraq. Saddam Hussein got 99% of the vote and the 1% that didn’t were shot after being rounded up.

But once again, here we have the Western media doing stories for consumption by American citizens and low-information voters into believing that government and life in Iran is just like it is here in the west. They have a government. They have people. The people vote. They have leaders. The people of Iran love Obama, and when Obama announces that the nuclear quest of the Iranian government has been stopped, the people of Iran head to the streets and start dancing?

Okay, that’s one story. Then the Washington Free Beacon: “Iran Brags About Nuke Concessions — Iran and world powers on Thursday announced that following the latest round of nuclear negotiations, Western powers agreed to permit Iran to continue operating the core aspects of its nuclear program and that all sanctions of the Islamic Republic would be terminated.”

Wait just a second, now. Let me reread this. “Iran and world powers on Thursday announced that following the latest round of nuclear negotiations, Western powers agreed to permit Iran to continue operating the core aspects of its nuclear program and that all sanctions of the Islamic Republic would be terminated.”

That’s not what Obama told us happened. That’s not what Obama said in the Bergdahl garden after the deal was announced yesterday. Well, no wonder they’re dancing in the streets in Tehran, if this is what they think happened. Western powers, us, agreed to permit Iran to continue operating the core aspects of the nuclear program? The sanctions are being lifted. Sanctions of the Islamic Republic are being terminated. We are rewarding them by removing sanctions, and they continue to develop their nukes. That’s the Washington Free Beacon.

And by the way, these sanctions are never gonna be reimposed. Obama said yesterday that if they’re caught cheating we’ll just slap the sanctions back on ’em. Well, it doesn’t work that way. I don’t think the sanctions will ever be slapped back on them or resumed because Russia and China would veto any of that at the UN. Sanctions that Congress would try to impose would be vetoed by Obama. There aren’t gonna be any new sanctions.

Okay, so now we’re confused. The Iranians are dancing joyfully into the night and now we’re told that Iran and world powers announced that western powers agreed to permit Iran to keep going on their core nuclear development and no sanctions. That is not what Obama said. That is as far a cry from what Obama said yesterday as you can imagine.

Now, back to the Washington Free Beacon: “Iran Accuses US of Lying About New Nuke Agreement — Just hours after the announcement of what the United States characterized as a historic agreement with Iran over its nuclear program, the country’s leading negotiator lashed out at the Obama administration for lying about the details of a tentative framework.

“Iranian Foreign Minister Javad Zarif accused the Obama administration of misleading the American people and Congress in a fact sheet it released following the culmination of negotiations with the Islamic Republic. Zarif bragged in an earlier press conference with reporters that the United States had tentatively agreed to let it continue the enrichment of uranium, the key component in a nuclear bomb, as well as key nuclear research.”
Now, this is what we heard the deal was last week and the week prior when Netanyahu came and addressed Congress. We heard, the leaks were that the — I’ll give you the specifics. The specifics of the deal were that Iran will be permitted to continue developing its nuclear ability, not just nuclear power, but nuclear weapons. That they would not be able to weaponize for 10 years, and that in those ten years, representatives of the US, initially Obama and others, would use their extraordinary persuasive powers to convince the Ayatollah Khamenei and the other mullahs not to weaponize. But that the belief was we didn’t have the right to tell them they can’t have a nuke. That’s what was leaked out.

There were people denying that. But this report from the Iranian foreign minister is pretty much confirming that what we had access to as a result of a leak is actually what happened. He’s out there, “No, no, we got permission to go ahead.” Let’s say, just for the sake of discussion here, let’s say that Obama was telling us the truth yesterday. Let’s say that the Iranians did agree, that they’re gonna stop and that they’ve agreed to inspections and that they’re gonna close down one of the underground plants. Let’s say everything Obama said is true and the Iranians agreed to it. And then after it’s all done and he announced it, the Iranians go out and accuse Obama of lying about it. Either way here, this isn’t good.

My gut feeling on this is that all of this huffing and puffery from Obama telling the Iranians what will be and what won’t be, I’ve never bought that. We don’t have any leverage over the Iranians because Obama doesn’t think there’s anything inherently wrong with them getting nukes. And that’s the bottom line. I must repeat an observation I had yesterday. My entire life, the American left has opposed nuclear everything. Nuclear power, nuclear weapons, nuclear bombs.

Hell, if Elon Musk could find a way to put a nuclear reactor in one of his Teslas and make sure you could drive it for years without a recharge, they would oppose it. That’s how opposed to nuclear they are. And yet, here we have the world sponsor of terrorism who has openly admitted its intentions of destroying Israel, our ally, and us, nuking up, and I don’t hear a peep from any leftist worried about the Iranians getting a nuke, power or bomb.

It doesn’t make any sense to me. Whenever the US was gonna go nuclear power, nuclear this, do a movie, China Syndrome shut it down, no nukes allowed, no new nuclear plants, no new nothing. In addition to that, nuclear weapons, we gotta get rid of them. So why is there no concern when the Iranians are nuking up? Maybe the answer is, it’s never been about nuclear, just like in Indiana it’s not really about discrimination or gay rights. It’s about something else.

RUSH: You know, Obama says the Iranian deal is a “good deal.” That’s what Obama said about his framework for a framework deal, except there is no deal. Iran said that the deal Obama announced is not the deal they had in mind. Now, you may say, “Okay, Rush, we’re in Americans. We never, ever… Come on. We have to side with our president here! You can’t side against him. Politics ends at the water’s edge!”

All I know is, the Iranians never told me that I could keep my insurance plan if I liked it.