Hillary Will Run on Her Womanhood

RUSH: You remember we’ve discussed the Democrat Party and their identity politics problem?

I think it’s a problem. Identity politics. That’s Brittney Cooper, a classic example of identity politics. What somebody is, what they really think is irrelevant. All this surface stuff about them is what defines them. Here you have Obama, first African-American president, above criticism, insulated from criticism because any criticism is said to be racist, so the critics shut up and he has his way. 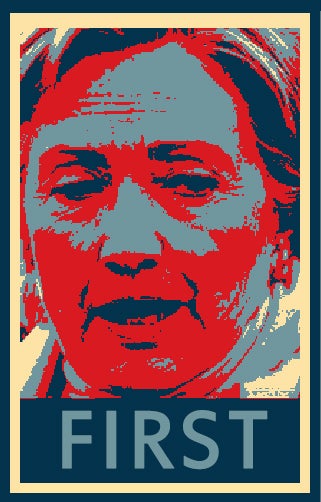 Well, Josh Kraushaar has a piece here at National Journal. “Democrats Have an Identity-Politics Problem — In the Obama era, Democrats have become a party defined by identity. What happens when they run out of candidates who can excite their diverse base?” He starts out with this question: “[A]s the competitive GOP field grows larger by the day is why Hillary Clinton is barely being challenged for the Democratic nomination. And the answer lies within the changing nature of her party.

“It’s not because she’s capable of raising record sums of money. … It’s not because she’s a Clinton.” That’s not why she’s the only Democrat seen with a chance. “It isn’t because she’s a strong campaigner. … And it’s not primarily because the Democrats have a fairly weak bench of presidential prospects — even though that’s an important contributing factor. … No, the main reason why Clinton is a near-lock for the nomination is that Democrats have become the party of identity.

“They’re now dependent on a coalition that relies on exciting less-reliable voters with nontraditional candidates. President Obama proved he could turn out African-American, Hispanic, and young voters to his side in 2012 even as they faced particularly rough economic hardships” brought on by his policies. “As the first female major-party nominee for president, Clinton hopes to win decisive margins with women voters and is planning to run on that historic message — in sharp contrast to her campaign’s argument playing down that uniqueness in 2008.”

See, in 2008 she didn’t hype the fact that she’d be the first female president. But that’s now the window. Now she’s gonna do it after seeing how successful it was for Barack Hussein O. “One of the paradoxes of today’s Democratic Party is that, despite the increasing importance of a diversified voting coalition, the party is drastically underrepresented by talented nonwhite politicians…” That’s an oxymoron, “talented nonwhite politicians”?

“[T]he party is drastically underrepresented by talented nonwhite politicians in its congressional, gubernatorial, and statewide ranks. The great irony of Obama’s presidency is that by playing to his progressive base so much, Obama oversaw the collapse of his party at the local level,” and, by the way, there is no doubt about that. You don’t hear about it because it isn’t written. But in 2010 and 2014, the Democrat Party lost close to over a thousand seats nationwide, all the way down the ballot.

It’s quite a lengthy piece. I’m just giving you some of the highlights.