My Advice for the GOP Field

RUSH: Marco Rubio announced that he’s running for president today. There’s an interesting story here in The Politico, and the headline: “Tea Partiers Rage Against Rubio 2016 — Florida activists helped propel Marco Rubio into the Senate — but many say they feel betrayed by him, and they wonÂ’t support his presidential bid.”

Have you heard that, Mr. Snerdley? Have you heard that the Tea Party is fit to be tied over Rubio? It’s about immigration, right? He came out, but he got his mind right on it. People don’t believe that, huh? (interruption) They don’t, okay. They felt betrayed. He got elected by Tea Partiers, but the first thing he did was join the amnesty coalition. Then he backed out of it, though. He claimed to have — I don’t know. I mean, I don’t know anything, ’cause I don’t — (interruption) no, no. No, no, no. I know everything. 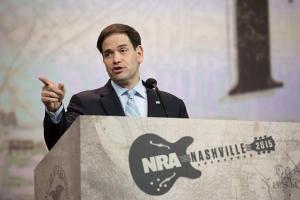 What Snerdley’s telling me is, hey, these people, if you betray them once, if they give you everything they’ve got and you betray them, that’s it. There’s no second chances. That’s what The Politico story says here, and then they go out and they found some Tea Partiers, which amazes me that The Politico knew where to go to find some Tea Partiers. Most people in the inside the Beltway political world have no idea where Tea Partiers are, other than in Alaska and Texas. Sarah Palin, Ted Cruz.

“But donÂ’t count on many of those original Florida Tea Party supporters to be in the crowd Monday evening when Rubio is expected launch his bid for the White House with dramatic fanfare at MiamiÂ’s Freedom Tower, converted in the 1990s as a monument to Cuban refugees. Six years after the movementÂ’s initial rallies, marches, and demonstrations, Tea Party activists feel let down and betrayed by their native son.”

They quote somebody here named KrisAnne Hall, an attorney and Tea Party activist from north-central Florida. She said, “IÂ’m through with him. He will never get my vote. Â‘DisappointedÂ’ would mean that he has an opportunity to restore his credibility, and there is no opportunity for that.”

Here’s another one. Lisa Becker, who helped run A Sisterhood of Mommy Patriots, that’s a Tea Party group geared toward mothers. “When he was first running for Senate, I was a big fanÂ…He walked the neighborhood both inside and outside his district, knocked on doors and asked what peopleÂ’s needs were, what their issues were. I was so impressed with that. Then he got into office. And Once he got into Washington, he had his sights set early on higher office. … He surrounded himself with people who were going to help him navigate Washington to get there, and in that process he disconnected from his base.Â”

Whoa. So The Politico’s gone out and found some Tea Party people that make it clear that as far as they are concerned, there was about four or five of ’em here, that their support for Rubio is over. Now, you think that’s a little intolerant, Mr. Snerdley? Do you think it’s a mature attitude? (interruption) Well, I understand… (interruption) No, no, I understand. I think that the one of the reasons people are members of the Tea Party is they’re fed up with being told and promised things and assured of things during the campaign, and then governance begins and it changes totally.

What makes the Tea Party different from other groups is they only require one lesson, and they learn the realities of political life. One lesson is all they need. They don’t need to go back and make the same mistake two or three times before they finally get it. So, interesting. We’ll have to wait and see. His announcement is scheduled for tonight in Miami. And of course the Drive-Bys in the media are having a lot fun pitting Marco Rubio against Jeb Bush for Florida donors, Florida money and so forth. But I still think that a big Republican field is gonna be a lot of fun. It actually could be a lot of fun, in addition to all the other characteristics it might possess.

But I’m gonna continue to say what I offered last week. I do believe — if I had the opportunity to be a collective campaign manager for all — let’s say there’s 16 of ’em, for all 16, I would advise them whatever you do, focus, all of you, focus on defining your potential Democrat opposition. The media is not gonna do this for you. We know the media is not gonna vet, be it Hillary, be it Elizabeth Warren, be it Biden, whoever they throw up there, they’re not gonna vet them. The media is not going to tell the American voters anything about these Democrats other than to portray them as godlike. It’s gonna be up to you guys to inform the American voters who the Democrats opposing you are.

And I understand this comes up against some fear, because a lot of Republican consultants have convinced Republican candidates that it’s a losing proposition to criticize Democrats because that scares the independents. And once you start being critical, once you look like you don’t want to work with the Democrats, instead you just start criticizing, supposedly at that point the independents will abandon you and run right back to the Democrat Party.

I think it’s a trick. I don’t think there’s anything to it, but there are nevertheless a lot of Republicans wary of being critical. So they’ll say, “I’m gonna focus on my issues, I’m gonna focus on being positive, focus on change,” but you have to also give people reasons not just to vote for you, but you’ve got to tell them who your opponents are. It works every time it’s tried.

I’ll tell you something else. For every one of you Republican candidates, those who have announced and those who have yet to announce, I can guaran-damn-tee you the American media is going to be defining you, and they’re going to be lying about you, and they’re going to be trying to tell the American voters every negative thing about each one of you they can come up with, even if they have to make it up, or even if they have to exaggerate. And if there isn’t a negative word from anybody about the Democrat candidates, you’re not gonna have anybody with any reason not to support the Democrats. But you’re gonna have all kinds of people with reasons they think not to support you.

The media simply isn’t going to do it and there’s nothing wrong with identifying your opponents. There’s nothing wrong with defining them. There’s nothing wrong with drawing a contrast between them and you. And so far from what I’ve seen, the Republican candidates are following through. There are a lot of — Rand Paul and a number of them, Ted Cruz, they are spending a lot of time going after Hillary. She is the presumptive nominee. And I don’t think they should wait ’til the general election to start that. That’s just me, and I say that up front, it’s not my business, and there are people whose business it is. I mean, I’m in radio; they’re in politics. But I still think that that’s gonna have to be done, and the sooner the better and the more constant and consistent, the better.

CALLER: Thanks, Rush. Couple things about Rubio. I’ve supported him. I no longer do. Number one, I never hear establishment Republicans slam him like they did the senator from Texas, his name escapes me. I’m a little nervous.

RUSH: Yeah, I feel like saying, “What border fence?”

CALLER: Right, exactly. But he said that.

RUSH: Folks, he’s calling to confirm — we had a story in Politico in the first or second hour that the Tea Party is very angry at Rubio, and I had not — you know, I knew there was some — but The Politico story makes it sound universal. So what’s happening here, Steve’s calling to essentially confirm the Politico story and tell us why, and that’s because you think he goofed up on immigration. But you also said something interesting. You said that the Republican establishment does not go after him the way they go after Cruz. What, does that make you think that he’s not as Tea Party as you would like him to be?

CALLER: That’s correct. We sent him there to be a fighter against these people, and if he were fighting against them, they would not like him.

RUSH: What if Rubio runs and says, “Hey, our immigration laws are not broken, they just need to be enforced. We don’t need massive new laws.” I wonder how that would play. Because that’s right, by the way.