RUSH: For you younger listeners, those of you who are Millennials, and others of you who were alive and paying attention during Whitewater but still are not sure what it really was, would you like for me to tell you in one paragraph what it was? You really want to know what Whitewater was? It’s real simple, and it’s real slimy.

Whitewater, the Clintons’ Whitewater scam with Jim McDougal and his wife, Susan, he was the money guy. The Clintons didn’t have any money. It was a real estate scam where they bought development property, resort type property near bodies of water and so forth, Whitewater, in Arkansas. They built homes, they bought lots, and what they did, they aimed this development at seasoned citizens. It was not an old folks’ home. It was single-family homes that seasoned citizens, wealthy, moderately wealthy retirees could buy and live in, single family dwellings.

The Clintons would cheat the seniors out of their down payments. If the buyer missed one mortgage payment, the Clintons repossessed the property and resold it, and they did this over and over and over. It was a scam designed to sell property to people who couldn’t afford it. They got the down payment from them, and then, you know, of course when something’s financed, the finance company gives you the payment, and the person living in it makes monthly payments. So you sell a house, you get the money for it, from the bank or wherever. The person with the mortgage pays the bank back.

Well, the Clintons got the money, the McDougals got the money from whoever was financing it, and if these retirees missed — it was in the document — if you missed one mortgage payment, the thing was repossessed. They did this and they kept flipping these properties over and over. I mean, it was targeted to the seasoned citizen population. It was not just limited to them, but the people that ended up getting approval to buy property were people who it was suspected might not be able to make a payment at some point. And when they missed one, the Whitewater Development Corporation swept in there and repossessed the property and kicked out the old folks and resold the property. That’s essentially what Whitewater was.

Now, it took the New York Times, gosh, how many days and reams of paper and words to explain it all. But if you’re like me, and you can make the complex understandable, that’s essentially what it was. In other words, the Clintons were the original predatory lenders. The Clintons were the ones that showed the subprime guys how it’s done. You qualify people who aren’t qualified, you take advantage of when they can’t pay, you repossess, and you resell it. The subprime was obviously a little different than that, but that’s what Whitewater was. It was a get rich quick scheme.

It was designed to sell again and again properties over and over. Not sell a bunch of properties, just sell a few and flip ’em. Predatory lending. And the Clintons, “That’s what everybody else did.” There weren’t any legitimately wealthy people. Everybody cheated people. I mean, hell, that’s what liberals think anyway. They don’t need to resent rich people on the come. They do anyway. They don’t believe that wealth is legitimate unless it’s inherited, like the Kennedys. 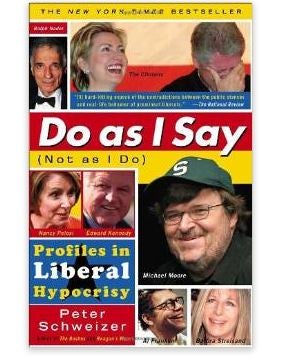 It contained data, information on the Clintons, but if you remember, it hit a lot of people. Here’s what Schweizer wrote about Whitewater: “When customers wanted to buy a lot, they signed a simple purchase agreement, but this was no ordinary real estate contract. The small proton at the bottom read, ‘In the event the default continues for 30 days … payments made by the purchaser shall be considered as rent for the use of the premises.’

“In other words, the buyers did not actually take ownership of their property until the final payment was made. If a buyer missed just one monthly payment, all of their previous payments would be classified as rent and they would have no equity in the land at all.” That’s what Whitewater was. Miss one payment and it doesn’t matter how much you’ve paid prior. You lose your equity; you’re automatically reclassified as a renter.

Guess where the equity went? Guess where it ended up being transferred to? Well, the people at Whitewater that ran it! That would be the McDougals and the Clintons. So you ended up losing all your equity. You became a renter if you missed just one payment. That’s the fine print in the clause I just read to you, and in some cases they had foreclosures. They could repossess if you missed a payment, and then they’d just sell it and flip it again.

That’s what Whitewater was.

It was a screw job.