She does not have blanket support in the media for her presidency, for her campaign. There are plenty of ’em that want somebody else. Some of them want Elizabeth Warren. Some of them are gonna want this O’Malley guy. And I’m telling you, keep an eye on Jim Webb. You can laugh, but keep an eye on Jim Webb. It’s early, and I remember at this stage in 2007 everybody thought Hillary had it locked up.

There wasn’t even a breath being expelled with the name “Barack Obama” on it. It was Hillary’s. It was a fait accompli. It was going to be a coronation. She thought so, too. Out of the blue came Barack Obama, and the media immediately fractured. It took this program and Operation Chaos to maintain Mrs. Clinton’s campaign all the way through the summer. If we hadn’t engaged in Operation Chaos, Obama would have wrapped up that nomination in April or May instead of June or July or whenever he did it.

Now, The Politico: “A handful of deep-pocketed donors are reconsidering their gifts to the $2 billion Clinton Foundation amid mounting questions about how it’s spending their money and suggestions of influence peddling, according to donors and others familiar with the foundation’s fundraising. … This story is based on interviews with more than a dozen donors, staffers and operatives who have interacted with the foundation or continue to do so. Taken together, their accounts portray an organization scrambling to address concerns about its budgeting, fundraising and donor-vetting while being buffeted by a raging political storm.”

I’ll tell you this. Let’s say you’ve got Sleazy Donor A over here who has donated $10 million, $15 million, $20 million to the Clinton Foundation. He’s expecting Mrs. Clinton’s gonna be elected the president and that Bill Clinton and Hillary are gonna be back in the #1 and #2 seats of power, and that he’s gonna get it paid back for his donation, whatever it is he wants. That’s why he’s giving the money and he’s gonna get it, but it requires her being elected.

Well, now all of a sudden what appeared to be a slam dunk doesn’t look like it’s gonna be a slam dunk, it may be harder, and some of these donors are starting to ask, “Wait a minute, have I maybe thrown my money away?” Then they see that 85% of the money donated to this foundation is going to salaries, travel expenses, entertainment expenses, everything but actual charitable or other kinds of functioning donations.

Only 15% of all the money collected actually goes to something like that hurricane or earthquake relief or disaster relief of some kind or malaria. Whatever the foundation claims that it’s doing, only 15% goes. Now, they don’t particularly care about that. What they care about, the donors’ concern is, “Uh-oh, that’s not good. That could mean the people I’m investing in to win the election are gonna have a tougher time winning.

“If these people are gonna get caught playing games with this kind of money, then this is looking like a riskier and riskier proposition.” So they’re starting to get concerned. Politico: “The worst case scenario for the foundation, its allies say privately, would be if Clinton lost her presidential campaign in a manner similar to the way she lost her 2008 race to then-Sen. Barack Obama, which at least temporarily tarnished the family’s political brand. Unlike 2008, a losing 2016 campaign would effectively end the political ambitions of” the Clinton Crime Family. 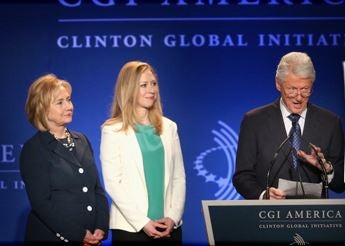 If this one blows up, if this one bombs out, there is no, “Give us four more years and we’ll get it right.” This is the last stop. That “That would thrust responsibility for the foundation’s future squarely into the hands of [Chelsea]. While she is being groomed to take over,” but these people don’t know Chelsea from Smelsea. They don’t know what they’re dealing with. They gotta trust that she’s gonna grow into the family tradition as the mother and father have dictated.

All the while, Bill is out there saying, “Don’t worry. Everything’s fine! Hillary’s just like you and me. But she’s not an everyday person. (She Ain’t Everyday People parody song) “White comedian Paul Shanklin,” the vocal portrayal there of William Jefferson Blythe Clinton as Sly Stone and the family, a takeoff Everyday People. By the way, this is the New York Post: “Charity Watchdog: Clinton Foundation a ‘Slush Fund’ — ‘It seems like the Clinton Foundation operates as a slush fund for the Clintons,’ said Bill Allison, a senior fellow at the Sunlight Foundation, a government watchdog group where progressive Democrat and Fordham Law professor Zephyr Teachout was once an organizing director.”

“Charity Navigator, which rates nonprofits, recently refused to rate the Clinton [Crime Family] Foundation because its ‘atypical business model … doesn’t meet our criteria.'” I’m telling you, this kind of stuff — you know, the donors, people that give big money to these people — are not nearly as confident as you who are afraid of the Clintons are that they’re gonna be okay in this. I mean, they’ve got their money at stake.

Here’s a quote, by the way, from a Red State story: “Last year, former Virginia Governor Bob McDonnell drew 2 years in prison. He was accused of accepting golf outings, free travel, and loans from a political donor well under $200,000 in value. What this shows is that if you have the right politics during the time a Democrat is president that you are bulletproof.” But Bob McDonnell and his wife went to jail, and they are pikers compared to what the Clintons are doing and have done.