Republicans Let Hillary Get Away with It

RUSH: I’ve got an audio sound bite here from somebody who claims Hillary gets away with what she gets away with because the Republicans never push back, and I just thought I had it here. It’s some woman, and I can’t find it. I had it right here and I’ve gone through this two or three times now and I cannot find it. So now I’m beginning to question, maybe I didn’t see it in the audio sound bites.

(interruption) That’s why! I can’t find 14 and 15. I’ve got everything about 14 and 15. Okay, so I don’t have 14. Obviously I put ’em aside somewhere; now don’t know where I put ’em. Oh, well. Why do Bill and Hillary away with it? I’ll tell you why they get away with it. Because nobody cares if you cheat. Liberals and Democrats, doesn’t matter. Especially if they’re beating conservatives. They’re entitled to do anything.

They can cheat, they can stack the deck, they can have the media unfairly in their corner; it doesn’t matter. I think that’s another thing. Conservatives would not be allowed to cheat and win, and it may be painting with a bit of a broad stroke, but nevertheless… Gee, is it… Okay, here, I found it. Let me get this off my chest, otherwise I’m gonna be distracted trying to find this thing that was right in front of my face. It’s this morning on Fox. Grab number nine, audio sound bite number eight, eight and nine.

I’ll just tell you what I said number eight here.

Brian Kilmeade is speaking with the vice president of communications for a PR firm, FP1 Strategies about this whole situation with Tom Brady and the impact of the Ted Wells report. They played a sound bite of me, and then Kilmeade asked a question: “Why is Tom Brady held to a higher standard than Hillary Clinton? Do we have it wrong?” Here’s the sound bite. This is what they played for the guest who answered the question. It’s number eight, and it was a point that I made yesterday on the program. 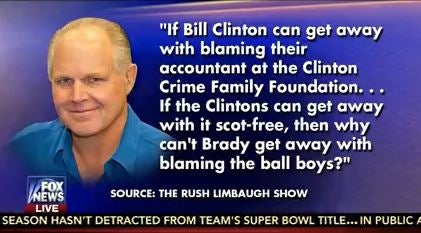 RUSH: I think I made that point in the third hour yesterday, but it’s a valid question. You know, Clinton’s running around saying (impression), “Hey! (laughing) I just work here!” I just work here! Well, the accountants made a mistake. “The accountants just made the mistake.” Nobody gets irritated. Nobody gets agitated about it. And it is true. I had a caller even bring this up. I said, “The reason is that sports is much more personal.”

You bring the Patriots into your home whenever you watch ’em on Sunday, and if they cheat or if they don’t win, you personally give it a lot of your passion. These political figures are distant. You don’t know them personally, and you don’t think you ever will. You never really get that close to them, so it’s really difficult for them to let you down. But here is what Ashley Pratt said, and this is a really bang-up good answer. She’s vice president of communications for FP1 Strategies.

PRATT: I’ve been born and raised a Patriots fan, and I am so glad we won that Super Bowl, but number two: I’m a hardcore Republican. (giggles) What we see with Hillary Clinton is the idea that she and her family have been able to cover-up so many things, and it’s okay, and we don’t keep pressure on her to say, “You should address this.” Tom Brady came out and did a press conference. He at least came out and addressed it. 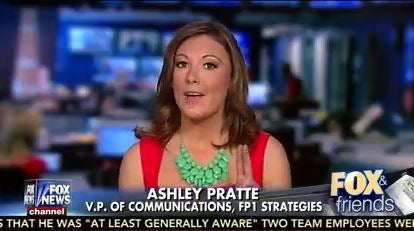 I think that was a formative experience, as was the government shutdown in 1995, and the Republicans have been convinced that any criticism or any attempt at accountability of Democrats will backfire on them. But she’s got a good point. That’s one of the reasons the Clintons get away is there’s no push-back. Democrats aren’t gonna hold ’em accountable, just like Patriots fans are not gonna hold Brady accountable. You wouldn’t expect them to.

Well, here. Now, stop and think of this. Okay, what does this mean? The Clintons are engaged in chicanery and bribery and selling influence, and everybody knows it. And instead of holding them to account, everybody’s running around asking, “How do they get away with it?” I mean, back to my favorite analogy: “How does Colonel Sanders get away with killing so many chickens?” At some point, when are people gonna stop asking, “How do they get away with it?” And start holding them accountable?

RUSH: This David in Reading, Pennsylvania. Great to have you. Hello, sir.

CALLER: Hey, Rush. It’s a pleasure to speak with you today. I appreciate the revealing insight you’ve given to a lot of the things happening in our nation today.

RUSH: I appreciate you saying that. I really do. Thank you very much.

CALLER: I’d like to throw out two quick points, and then get to my question if you would indulge me.

CALLER: Oh, how I wish the 10 or 12 Republicans running for president would answer every question they’re asked over the next five days with the answer, “Please ask the Clintons to release the salary list of all persons drawing one from the Clinton Foundation.” Boy, would heads pop to see Chelsea’s $995,000 a year. Who is drawing over $500,000 a year for that thing, would probably be astonishing.

RUSH: I tell you something, though. In all fairness, I was early on an advocate of these Republican nominees hitting Hillary constantly rather than each other, and they’ve done that. Not so much lately, but early on they were, and it’s one of the reasons why there is so much focus on Mrs. Clinton and her foundation and her husband. The Peter Schweizer book is big, too. But the Republicans, they’re not doing it as often as you have suggesting there, but they’re hitting her.

CALLER: I appreciate that. I appreciate that response. My second point is, I wish when the snarky Democrats are telling us that scientists say that human activity is the cause of global warming, why doesn’t just one person in the room would ask them what they think ended the last ice age?

CALLER: I don’t think it was SUVs.

CALLER: I think it was something else. (garbled)

RUSH: You’re making an error here. You are assuming that global warming is about science and global warming. And it isn’t. Somebody even let the cat out of the bag the other day. I don’t have it in front of me. But somebody involved with the United Nations Intergovernmental Panel on Climate Change admitted the whole thing is a ruse to empower a new world order, a global government. The whole thing’s a ruse.

The scientists want you to take them on on science, because they’re making it up. They’re making up this data. They’re making up the tree rings, ice cores and all of this stuff. You don’t go at this with logic: “Well, wait a minute. How did the last ice age end? How did the last ice age start? I mean, if there’s global warming now and man’s causing it, what caused it to heat up 500,000 years ago?” This has to be attacked ideologically.

If people are gonna be convinced about this, it’s going to have to be politically and ideologically in which these people advocating climate change are defeated, because that is the playing field on which it’s occurring. The idea that science is behind this is a smokescreen and a distraction. It works with young people to convince them, but it’s all a gimmick, and they need to be exposed for who they are, and they’re not scientists. They are politicized leftists hiding behind science.