RUSH: From Yahoo Parenting. Headline: “Mom of 8-Year-Old Gay Pride Marcher Responds to Critics — There was plenty to marvel at during the New York City Pride March on Sunday, but one precocious 8-year-old boy stood out from the crowd: Desmond Napoles, of Brooklyn, who joyously strutted and vogued his way down Fifth Avenue in a rainbow tutu and gold sequined cap. And when critics reared their heads on social media Monday, suggesting his participation was inappropriate, mom Wendylou Napoles shut them down with grace and pride.

“‘If you are offended, don’t look,’ Napoles wrote, in part, in a lengthy post on the Facebook page of LGBT website NewNowNext.” A graceful way to stop criticism: “If you are offended, don’t look.” All right, I’m gonna show you the picture. I’m gonna show you this 8-year-old boy. I’m gonna show you “Desmond Napoles, of Brooklyn, who joyously strutted and vogued his way down Fifth Avenue.” Are you ready? There it is. There is eight-year-old Desmond Napoles strutting and voguing his way down Fifth Avenue on Monday in the gay pride parade.

The picture was posted all over the place, and it was said to be inappropriate. “How dare you do this to an 8-year-old boy, dress him up this way and have him…?” The mother said… I’m turning the Dittocam off now. We’re gonna post this at RushLimbaugh.com in a moment. Koko will find it; you’ll be able to see it. Dittocam’s off. She said, “If you are offended, don’t look.” You think that would work in Charleston, South Carolina, and the flag? “Hey, if you’re offended, don’t look.” 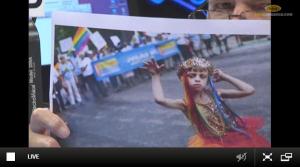 “‘He is old enough and smart enough to know he would be marching in the Pride parade in front of thousands of people and did it willingly,’ she wrote. ‘In fact, I thought he would stop after 10 blocks of walking, but he felt so good about being dressed up and being who he is that he vogued and danced the entire two miles. We collaborated on the outfit and this is how he wanted to look today. This was his Pride today. He felt it. He loved it. He was it. These children will be our future.'”