RUSH: Folks, now Macy’s has told Trump they’re gonna get rid of all of his merchandise, and Trump is showing everybody how this is done. I don’t care what you think of Trump, but Trump is not backing down. Macy’s cans him, says they’re not gonna sell his merchandise anymore. Univision? He’s suing Univision! He goes on television and he says, “I didn’t know it! Some of my best friends are at Macy’s; I had no idea they supported illegal immigration. I had no idea Macy’s was in favor of this kind of law-breaking.”

That’s the way it’s done! I don’t care what people think about it, this kowtowing to political correctness… A little inside baseball story. It doesn’t matter to anything. It’s just I was playing golf at Trump’s course here a couple years ago. I happen to be a member of Trump International, and I’m out there playing and he is playing in a foursome with the CEO of Macy’s, and I’m a couple of holes behind. But our paths take us right past each other. We’re on parallel fairways.

Whoever that was. Not the Macy’s guy, another guy in the four. “Richest man in Italy! Yeah, he drove up here in a Ferrari. I’ll show you. I’ll show you the Ferrari when we finish. We put it right out in front of the front door.” I said, “Cool.” I love the guy. I’m telling you, I love the guy. I don’t know how far his campaign is gonna go, but I’m telling you: Somebody is fighting. He and Carly Fiorina. Somebody’s fighting.

RUSH: I want to start with Trump here. Yesterday in Bedford, New Hampshire, during a campaign event, here’s what Trump said about his lawsuit against Univision…

TRUMP: So they left 51 wonderful girls who worked so hard all their lives to become a representative and go to the Miss USA Pageant. It’s in Louisiana. They’re all waiting there right now, and they left them just abandoned them.

RUSH: That’s Donald Trump attacking NBC and Univision for abandoning the Miss USA contestants and pageant all because of his comments on Mexicans and illegal immigrants. Now, you may disagree with Trump’s comments; I don’t care. But he believes, he’s standing up for them, he’s defending himself, and he’s going off on the people who are actually standing up and defending lawlessness, folks. NBC and Univision. What’s been wrong with the illegal immigrant movement is the illegals have become the stars.

Illegal immigrants have become the heroes and so forth, and anybody wants to stand up and defend the law in this country from the governor of Arizona to the Arizona legislature becomes the enemy. And usually everybody just says, “Okay, okay,” goes away, puts their tail between their legs and tries not to get noticed anymore. Trump even stands up and defends himself. Yesterday, also in New Hampshire during a campaign event, Trump spoke, and this is another sound bite of what he said.

TRUMP: Who’s done more than me? I’ve employed tens of thousands of people over my life I’ve employed, and they’re saying —

TRUMP: You know, people, they’re real losers. Sleepy eyes Chuck Todd? You know, the Meet the Press dying, going down the tubes, no ratings, but they say the other day, “Isn’t it sad when Donald Trump is gonna be up on that stage, and various senators and Republicans…?” 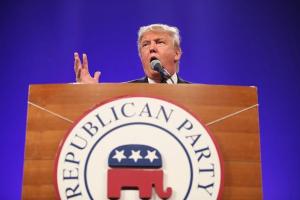 TRUMP: No, no, they’re saying. “[A]nd various senators and Republicans won’t make it?” And these guys haven’t done anything like compared to what I’ve done.

RUSH: It’s what he believes. Here’s the next one.

TRUMP: ISIS is building a hotel in Syria. They’re competing against me!

TRUMP: It’s true! I don’t want to go to that hotel. Okay. If I were a liberal Democrat these days I’m a super genius. I had an uncle went to MIT who is a top professor, Dr. John Trump, a genius. It’s in my blood. I’m smart! Great marks. Like really smart. If I were a Democrat — especially if I was a liberal Democrat — they’d say I’m the smartest human being ever. But as a conservative Republican, I gotta work hard.

RUSH: He’s right about that. You wouldn’t believe the… Well, forget that. The fact of the matter is that if Trump were a liberal, they would love him. The media would love him and they’d be celebrating his achievements and so forth and there wouldn’t be anything outrageous he could say. They’d say, “That’s just Donald,” like, “That’s just Joe! That’s just old Joe!” Just like (Bill Clinton impression), “Hey that’s just sex! (snickering) It doesn’t have anything to do with the way I do my job. Hillary doesn’t care about it. Hell, she gets hers when she can anywhere else. Everything’s cool here! No big deal.”

But with Trump? It’s a whole different story.

RUSH: One more Trump sound bite, by the way, here. This is again from the Bedford, New Hampshire, campaign event going after Mitt Romney.

TRUMP: When I heard Mitt Romney chose Paul Ryan, I mean, what he’s known for is killing entitlements. I said, “That election is over.” Now, it was really over because Mitt choked in the last month. Let’s face it, he choked. He choked like a dog. I don’t know what happened to him, but that was not a pretty picture to watch. I’m not a choker. He choked like a dog. 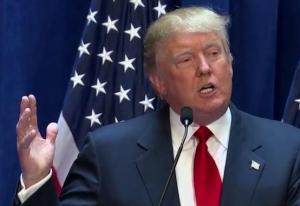 RUSH: Say what you want, folks, all these people that think we need a change in politics, well, here it is, ’cause Trump does not fit into any formula. Trump does not fit into any standard operating procedure or handbook. I mean, there’s not a consultant alive who would advise Trump to be campaigning the way he is. And, hey, let’s also admit something else. The way we have been campaigning, can anybody stake a claim to the fact that it’s working? So Trump is shaking things up, and he’s saying things, again, that a lot of people think and say privately but would not dare say publicly.

But Trump’s looking at it in a number of ways. I think he really believes this stuff and I think he wants to change the direction of the country. I think he does. And he’s also enjoying this. So let’s do some analysis here. This morning on CNN’s New Day, they had New Yorker magazine correspondent Ryan Lizza, and they’re talking about a new poll that shows Trump doing well in the nomination race. He’s right up there, he’s first or second place in New Hampshire and Iowa.

This has got the professional wags all atwitter trying to figure out what does this mean. And they’re all saying, “Well, it’s early, and polling data right now doesn’t mean anything.” It’s interesting. They who live and die by these things and want to attach all kinds of deep meaning to every freaking poll that comes down the pike, “Nah, these polls don’t matter, it’s early. Trump’s not gonna be there at the end, everybody knows this.” The host of CNN’s New Day Chris Cuomo said to Ryan Lizza, “Is there a chance that Trump’s surge is about his popularity and celebrity despite, not because of, what he said about immigrants?”

LIZZA: There is a sort of visceral like for someone in the Republican primaries who is, one, very anti-Obama, and very — sort of very conservative on some of these immigration issues. Conservative voters are not where Jeb Bush is. We saw this phenomenon in 2012. There was this phenomenon of a candidate among surging and then declining, but one candidate always staying up there with solid support. There was Mitt Romney versus someone else. This poll is good news for Bush, bad news for all of his establishment or possible establishment opponents. Trump is taking from Rubio, he’s taking from Walker, he’s taking from all those would-be challengers.

RUSH: Right. So Trump is secretly, and maybe he even knows it, I mean, the conspiracy minded among the leftist media, “Yeah, Trump’s in there, he’s just trying to buoy Jeb. That’s what he’s doing. He not really running. He doesn’t really want to be elected. He just trying to get rid of all these other guys so that Jeb has clear sailing.” That is a theory that is evolving and developing among the leftist media commentariat.

TOOBIN: I spoke to Trump’s lawyer today and he said, “Look, let me send you the contract.” And there is no provision in there, as are in a lot of personal services type contracts, “We can get rid of you for moral turpitude or embarrassing behavior.” I don’t think this case will ever go to trial. I assume it will settle like most of these lawsuits settle, but it is not a frivolous lawsuit, it appears, and it just is further grist for him saying, “You want to mess with me, I’ll show you I fight back.” 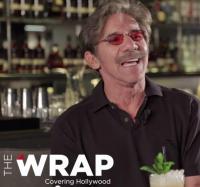 RUSH: Right. It isn’t frivolous, but it’s not gonna go anywhere. No way. Nah, it’ll be settled, something will happen, but it’s not frivolous. So they just want to continue to swat this away as though it’s just a mere irritant and it’s unserious. Last night on some website called TheWrap. They’re talking to Geraldo about Trump’s candidacy, and this is what Geraldo said.

RIVERA: There has not been this kind of excitement in the city since, in a very different way, 9/11, I think. There was never people so energized about, you know, negative or positive about a man announcing a run for an office.

RUSH: Are you kidding me? There hasn’t been this kind of excitement since 9/11 in New York City? Now, Geraldo has apologized. I’m told Geraldo’s already apologized for this and said that he was consuming adult beverages.

CALLER: Mr. Rush Limbaugh, a true honor to speak with you, sir.

CALLER: Hey, in regards to Donald Trump, let me tell you, Mr. Limbaugh, political correctness, the EPA, these liberals, Obama, who separates us and divides us from every aspect of our life as a nation, they all need their butt kicked. Let me tell you. Donald Trump is the man to do it. I believe people get in the booth, they will secretly vote for him if it gets that far. The man is our answer.

RUSH: Answer to what? Somebody that will fight back? No, seriously. I’m not trying to be provocative. What’s he the answer to?

CALLER: Well, he’s the answer to the liberals changing our country, to the EPA where we can’t do any business here. We gotta go to Mexico and everywhere else to do business. Donald Trump, this country needs to be run like a country for four to eight years to get it back on track. This is the man to do it. Another one may be Ted Cruz. But, I believe Donald Trump — I love the man. I absolutely love Donald. Yes, he’s egotistical, right? But he’s the answer to the nonsense and chaos that’s going on in the world today. And don’t ask me what nonsense, what chaos. Look around, man. You know.

RUSH: I wasn’t gonna ask you what nonsense and chaos. I know what you’re talking about. I happen to agree with you on the nonsense and chaos. This question of egotistical, yeah, Trump says (imitating Trump), “I’m rich, I’m really rich, I’ll show you in a minute. I’m smart. My uncle, highest IQ at MIT, ever, it’s on the records. I’m smart, genius. Romney choked. He’s a choker. Everybody knows that he choked. I knew it the minute he picked Paul Ryan. He choked. I don’t know why. Have to explain it to me. But he did. He’s a choker. I’m not a choker.”