It was some babe tagging around with her at CNN. You remember when Hillary was in Chipotle and didn’t leave a tip? She was sitting there at Chipotle. I forget what the story was, but she went in there and didn’t pull it off. Whatever she was in there for didn’t work because she was trying to pass herself off as an average little guy, average-kind-of-guy thing. She didn’t leave a tip. Whatever it was, the CNN… (interruption) That’s right, she wasn’t recognized. But the CNN babe that was tagging along is who’s going to do the interview. 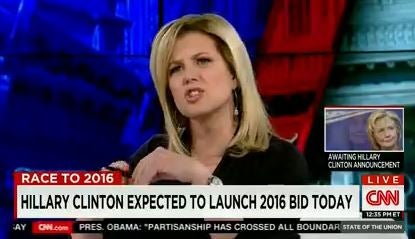 The CNN babe went to Chelsea’s wedding. The CNN babe is part of the Clinton entourage. Big whoop. Big surprise. This Clinton babe at CNN was also with Hillary at Chipotle, and reported for CNN after the Chipotle thing. “She was just so wonderful! She was just like a regular person! She’s just a regular guy!” What? What does it matter? The news with Hillary Clinton is that this dufus, Bernie Sanders, is drawing crowds out the wazoo out there. Bernie Sanders just drew 7,500 people in a town of 66,000!

Bernie Sanders is drawing crowds like I used to draw crowds at the Rush Excellence Tour. Meanwhile, Hillary can’t draw flies. She can’t sell books. She can’t draw flies. I mean, really, the networks are going gaga over the fact that she’s going to sit through an interview. Now they’re asking themselves, “Will she face tough questions? How will she deal with the tough questions?” She’s not going to get tough questions. I guarantee you, the questions have been vetted. The Clintons control everything they can.

For all the talk about how we on the right distrust the media, one thing… You might have trouble believing this, because I didn’t believe it when I first heard it. But I have it on good authority that Hillary hates them. I mean, did you see…? I didn’t talk about it yesterday because I just refused to get roped in. I’m not making a pun. I just refuse to get roped in by this daily soap opera, but did you see the photos from the 4th of July weekend where the press got roped in?

The press following Hillary got roped in. They actually roped them in! They put ropes around the press contingent so the press contingent would be contained and so everybody knew who they were. Do you know what it reminded me of? Did you see Blazing Saddles? One of the funniest sight gags in Blazing Saddles is you’ve got Slim Pickens and his gang and the bad guys, and they’re riding into town to get the sheriff. The first black sheriff in whatever town it was.

What was the name of the town in Blazing Saddles? Eh, it doesn’t matter. They’ve got a black sheriff, and Mel Brooks — William J. Lepetomane Jr. plays paddle ball with himself — has named him. Hedley Lamarr, Harvey Korman, runs the whole town. And of course, the cowboys in the movie don’t like the fact there’s a black sheriff. So Slim Whitman and the gang… (chuckles) “Slim Whitman.” Slim Pickens gets his gang of bad guys and they’re riding through the desert on the way to this town.

And in the middle of the desert, there is a toll booth. It’s just there. There’s no border. There’s no impediment. There’s no obstruction. There is a little… You know, you put the quarter in when you leave a parking garage and a little bar raises up so you can drive in there. There is one of those. But all these guys would’ve had to do was take their horses ten feet in either direction and they could have missed the toll booth. They could have run over it.

They stopped and grumbled and went through their pants to try to find change to pay the toll. Count Basie and his orchestra are playing right next to the toll booth, and these idiot cowboys stop and look for money to pay the toll on their way to get the black sheriff. That’s what the press reminded me of. Hillary roped them in and they stayed roped! Wherever she was. I thought I was looking at the bad guys in Blazing Saddles! Here these sycophant media types…

You should have seen it on CNN and MSNBC. All these analysts were embarrassed for Hillary. They thought it was horrible “optics.” They thought it was the kind of thing that could doom the campaign. I mean, they literally were sitting on the set with their heads in their hands, and they were all saying, “Ohhh, no!” They were really worried about the optics and how it was going to hurt Hillary that the press had been roped in and contained. It’s not going to hurt Hillary!

Nobody is going to remember it. The only people… And the optics? The only people that got harmed by this were the media! They’re the ones that looked like the fools! Wouldn’t you love to rope in the press? Hell, if I could do it and get away with it I’d do it. Good for Hillary for roping them in! I wish we could all do that. They’re the ones that look like the sycophant idiots, not Hillary. These people are so out of it. Bernie Sanders. That’s the Hillary story. They’ve got a problem.

They don’t know what to do about Bernie Sanders.

RUSH: Yeah, Rock Ridge was the name of the town in Blazing Saddles. The toll booth was for the only road leading to Rock Ridge. It was the Gov William J. Le Petomane Thruway. Slim Pickens and the guys, when they stopped at the toll booth — and literally the tool booth is in the middle of nowhere. They could have stampeded the thing. They stopped. They didn’t have the money. They waited because they had to send a bunch of guys back to headquarters for a bunch of dimes. 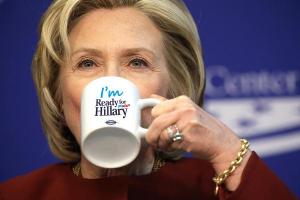 That’s what the media reminded me of in this Hillary situation over the weekend being roped in and staying inside the rope. And people in the media who were inside the rope claim not to be bothered by it. It was all kind of cool and good fun because they’re just so devoted to Hillary. And now they’re obsessing over this interview that she is going to give. It isn’t going to make any news. The only news it’s going to make is whatever she says in this interview that isn’t true or that she stumbles across and gets overwhelmingly dramatically wrong.

Remember, there’s an axiom that’s true with Hillary Clinton and one of the reasons why she hasn’t been prominent doing media interviews. The more Hillary opens her mouth, and I mean it, folks, it’s been documented. It’s been surveyed, studied and chronicled. The more she speaks, the lower her numbers go. The quieter she is, the higher her approval numbers go. It’s not dramatic, but it can account for five points. I’ve seen it account for five points. The longer she goes with just the press talking about her and building her up and fulfilling this notion that she’s great, part of the Clinton dynasty, smartest woman in the world, her poll numbers go up.

CALLER: Hello. It’s a pleasure to speak with you. I am particularly interested in the dialogue that’s going on with Trump. In Mt. Kisco there was just an arrest made today. Two day laborers got into a dispute. One had been deported twice, convicted of burglary and assault with a deadly weapon, and he killed another day laborer. He was found in New Jersey trying to flee. So I’m interested, being that Mt. Kisco is home to our lovely governor and also right down the street from Mrs. Clinton’s Chappaqua home, I’m interested to know if this particular case will be brought to her attention and sort of used to get her to actually take a stand that sounds reasonable and if it might come up in that CNN interview.

RUSH: (Laughing) The chances are slim and none and slim just left town. Because the idea that the CNN info babe is going to ask Mrs. Clinton about something like that that happened near Chappaqua home, no chance.

CALLER: Well, you know my generation lives on hope. So there’s always that, right?

RUSH: What generation are you in?

RUSH: This is going to be reported. I mean, it has been. You know about it. But it’s not going to be reported in places the low-information crowd will find out about it. And Mrs. Clinton’s not — the way to look at this first interview, I mean this is a sycophant interview. They’ve chosen an info babe who literally worships Hillary. She tags along with her. She’s been with her to the Chipotle incident, talked about how great she was. If this woman, if this info babe, does anything that ends up making Hillary look small or embarrasses Hillary, CNN knows that’s the last shot they’re ever going to get. And access is everything to the media, to their heroes. One way to understand this, let me ask, Kyle, when you were a kid, were you a sports fan? Did you have a favorite baseball team, for example?

CALLER: I’m a Buffalonian, so Jim Kelly and all of those, yes.

RUSH: That’s the press with Hillary.

RUSH: They’re like sports groupies in that sense, and they’re not going to — can you imagine you, okay, you love Jim Kelly. You loved him when he took the Buffalo Bills to four Super Bowls. It doesn’t matter they lost. You love Marv Levy. You even like Scott Norwood. And then the first chance you have to be around them are you going to go in there and start ragging on them and talking about what losers they are and ask them why they lost all those games? You’re not going to do that, are you? 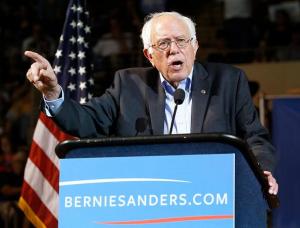 Bernie Sanders will be reacted to as though he’s a gnat at your backyard barbecue that you stole from your slaves. I better clarify. For people who didn’t hear yesterday’s show, who knows what would become of that comment? Yesterday’s show we unearthed the news that college professors have discovered that your backyard barbecue, whatever the occasion, 4th of July, Memorial Day, just any barbecue, you had that barbecue because the knowledge and technique, the ability, was stolen from the originators and creators who are slaves and native Americans. They created, they invented the backyard barbecue. They invented grilling steaks and hot dogs over fire outside. They invented it. Whites came along and stole it. That’s the news.

So I’m saying Bernie Sanders is going to be treated like a gnat at your backyard barbecue technique from which you stole from your slaves. If Bernie Sanders is asked about, it’s got to be very delicately done. She cannot treat Bernie Sanders in questioning — she can’t, for example, say, “Mrs. Clinton, do you see how well Bernie Sanders is doing, my God, this guy’s drawing crowds all over the place, are you worried?” Can’t do that at all. That will end any access CNN has.

The questions about Bernie Sanders have to be so innocuous that Hillary can just swat them away as though, “Who are you asking me about? Bernie who? Oh, yeah, I know Bernie, you know, he’s one of these guys, he’s been around forever. He’s just the most fun to hang around with, he’s not a serious guy.” Something like that she can say.