The Stock Market Is Scary, Folks

Greetings, folks, great to have you, Rush Limbaugh, the EIB Network and the Limbaugh Institute for Advanced Conservative Studies.

The stock market is scary because, look, folks, the one thing that everybody there knows is, if they stop for a moment and be honest with themselves, the stock market roaring along here really has — there’s no reason for it if you try to link it to an accompanying uptick in the US economy. It just isn’t there. The US economy is not percolating along at a level that would indicate the stock market doing what it’s doing. And we all know why. The Federal Reserve has been priming the stock market. That’s what quantitative easing is.

It’s built on a flimsy foundation and everybody involved knows it. That’s why just the briefest momentary glitch in anything can cause an outright panic or fear. Now, one of the things that’s also weighing in on this, as best I can tell, and I’m not, by the way, a professional or expert in this. All I can do is pass along things that I have read and, of course, then I apply my expertise and analysis. But the Chicom stock market is really plunging. The Chicom stock market has lost something like $3 trillion in value in just the past couple or three months.

And the Chicom government has done everything any Keynesian economist can think of to stop the plunge.

Nothing the Chicom government has done has stopped the plunge in the Chicom stock market. They’ve tried everything and nothing’s working. Well, we could tell you that that was going to happen, garbage in, garbage out. The fact of the matter is that if the Chinese stock market is plunging to the degree that it is, it’s one of two things: It’s either a massive correction taking place, which some of the smart money thinks is going on because a lot of this has been primed, folks. Around the world these stock markets are going through the roof but there isn’t any accompanying economic activity. Well, the Chicom economy has been a little bit of an exception, but maybe it hasn’t been growing at the nine to 10 percent rate that they’ve been reporting that it’s been growing at.

So you’ve got all of these factors that are contributing now to a great sense of unease. You had Obama out, it wasn’t long ago, by the way, just the past month or so, Obama went out and made a speech and started claiming credit for all the value in the stock market. Obama claimed credit for all of the gains in the stock market since he became president. And it’s interesting that the US domestic stock market decline pretty much began right after Obama gave that speech.

We’re dealing with massive egos here. And these massive egos on Wall Street don’t want to hear some kid from Hawaii who has no idea how to do what they do come along and claim credit for it. So there’s that factor.

This technical glitch. I mean, this could be anything. They claim they’re dealing with a major technical issue, but the Department of Homeland Security says there’s nothing to see here. United Airlines grounded their whole fleet because of a tech issue. The Wall Street Journal is down. So this could be Chinese hackers. It could be Hillary Clinton monkeying around with the server in her Chappaqua basement, not knowing what she’s doing. 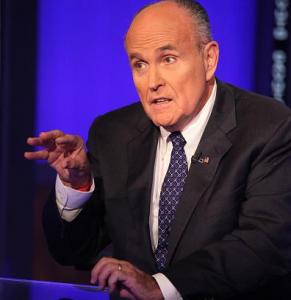 RUSH: The stock market, they are saying, “It’s not a cyber attack. Don’t anybody panic. There’s no cyber attack here. It is a technical glitch.” Rudolph “Rudy” Giuliani, the former mayor of New York City, the former United States attorney for the southern district of New York, was on with Neil Cavuto moments ago on the Fox News Channel. Cavuto said, “At the stock exchange, they’re obviously taking their time.

“They’re not resuming trading now, first of all, because they don’t know what’s going on, which is understandable. But I think they’ll delay going back on line until they are sure those systems are able to handle the traffic that is certain to follow. They have to be ready to trade and have their systems up and able to trade when things resume, right?”

RUDY: The biggest problem here is they’re not explaining it. This statement is a rather useless statement. It’s gobbledygook. Crisis Management 101: You give out specific information. Look, if they don’t know something more than this then the place is being run very poorly. The crisis management here is atrocious. From the moment this happened somebody should explain it. Even if they don’t know exactly what it is, it’s exactly what you’re saying, which is: Explain what we’re doing to work on it. “We’ve got 45 people working on it.”

That is the reaction a lot of people have, whether it’s right or not. The fact of the matter is that there has been so much obfuscation and secrecy, and the government has been spying on so many people and so forth. There’s a context to everything. People distrust the stock market anyway because they think it’s a rigged game. They think… (interruption) Same day. Along with the ChiCom stock market plunge, you’ve got United going down. The Wall Street Journal was down. It’s trying to come back, but it’s iffy.

And you can’t blame them for thinking that when the Federal Reserve prints $3 trillion (laughing) and it all goes to the stock market so all those guys can continue to afford their summer houses in the Hamptons, in the Sag Harbors, in the Montauks and wherever. So, anyway, Rudy is saying, “You guys, this is lousy, crisis management. If you don’t know what it is, say so. If you have some idea, say that.” Lousy crisis management.

RUSH: Just to get this out of the way, Josh Earnest, the press secretary of the White House, daily press briefing today, he opened the briefing with an update on the technical issue, the glitch that has halted trading at the New York Stock Exchange. Just 30 seconds here of what he said. Audio sound bite No. 28, by the way. Here it is… 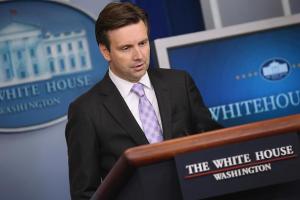 RUSH: There you have it, you see? The Regime has spoken! “There’s no indication that malicious actors were…” Not are. “There’s no indication that malicious actors were involved.” I don’t know. I just saw a subject line in an e-mail that I got, and I didn’t have a chance to even click on it. The subject line: “Did Anonymous…?” That’s the hacker group. “Did Anonymous Predict Today’s Stock Market Glitch?” I haven’t had a chance to click on that. So I don’t know. I probably shouldn’t even mention it.

I’m just sharing with you an e-mail I got. I get stuff all day, every day. You wouldn’t believe it. I go through gunk and drivel and bilge like you can’t believe, and that may be more of it.

RUSH: Okay. Here is the latest on the tech glitch affecting the Wall Street Journal, Dow Jones Stock Exchange and United Airlines and so forth. This is from the website ZeroHedge and the headline: “Is This What The First World Cyber War Looks Like? — “After a series of cyber failures involving first UAL, then this website, then the NYSE which is still halted, then the WSJ, some have suggested that this could be a concerted cyber attack (perhaps by retaliatory China unhappy its stocks are plunging) focusing on the US.

“So we decided to look at a real-time cyber attack map courtesy of Norsecorp which provides real time visibility into global cyber attacks.” Now when was this published? Looks like this is from right before noon today. “What clearly stands out is that for some reason Chinese DDOS attacks/hackers seem to be focusing on St. Louis this morning.” The screen shot… That’s what this company does, Norsecorp. They actually find a way to visualize what a real-time cyber attack map looks like.

Just looking at this, it looks like there’s all kinds of attention being focused on St. Louis. I don’t know if United Airline’s server’s in St. Louis or past St. Louis. The same thing with the stock exchange. It’s clearly admitted here that whether this is related to the series of cyber failures today “is so far unclear, although if there is a connection at least there is a way to keep track of the first global cyberwar in real-time.” Nobody really knows. The Regime sent its spokesman out to say that there’s nothing to see here. These are tech glitches. These are not cyber attacks.

Giuliani said earlier today this is lousy crisis management. That is illustrated by the fact that since there has been so little said explaining this, it leaves the field wide open for every superior theorist to come in and to supply an answer. Of course, we here at the EIB Network refuse all these seductive efforts to try to explain what’s going on. Just be patient and find out what’s going on. Even then, we might not be told the truth. We must fully acknowledge that we might not be told the truth given what this is.

But in due course, I’m fairly confident that we will find out.