RUSH: Here is Don in Cincinnati. You’re starting this today. Don, it’s great to have you with us. Hi.

CALLER: I’m incensed Rush. I’m incensed, I tell you! Taking the flag down over the South Carolina Capitol is not enough. Banning the Confederate flag off of license plates is not enough. Tearing down the Jefferson Memorial is not enough. Renaming Washington DC is not enough. Bumping and grinding against Kid Rock is not enough! Some of the greatest offenders are still free, and I’m talking about the Dixie Chicks. The audacity to name their group after “Dixie,” which support Southern states and slave states? All their CDs should be banned. All their music should be taken from the shelves. They should be forced to repatriate all their profits that they’ve made off supporting the name Dixie.

RUSH: Wait a minute, Don. The Dixie Chicks are politically correct because they’ve made a career out of bashing George Bush and calling him stupid.

CALLER: Irrelevant. “I wish I was in the land of cotton, where old time things are not forgotten. Look away, Dixieland.” That promotes slavery! To revisit slavery, every single time the Dixie Chicks take the stage. They should not be able to perform ever again, regardless of how PC they are, that’s an affront to anybody whoever came from the southern states and now has turned their back on the Confederate flag.

RUSH: You’re focusing on Dixie. But what about they call themselves “chicks” too. That’s an affront to the feminazi.

CALLER: They can call themselves “the Klan Chicks.”

RUSH: The Klan Chicks. I doubt that would work. But they did. They approached Kid Rock and they said, “Kid, you’ve got to take down that flag!” Kid is from Detroit. They told him, “You’ve got to take down the flag from your video and performances. You can’t use that racist flag anymore.” Kid Rock had a response I forgot what he said. I may never have known I know he was going to issue a response but I don’t know what it was.

Anyway, speaking of all this, there was an impassioned debate on the floor of the South Carolina Legislature over the removal of the Confederate flag from the state capitol grounds. It’s going to happen at 4:00 this afternoon. The governor, Nikki Haley, is going to sign the order, and the flag is history. It’s gone. Other than in museums in South Carolina, it’s gone forever. Now, no comment on that. I just have a question.

So much of the crime, so much of the stress, distress what have you in all of South Carolina and all of the South. So a little after 4:00 today, will we note an uptick in happiness in South Carolina, and if so will it be reported on? Will there be parties and celebrations? Will people feel personally as though a heavy load has been lifted from their shoulders? Will they be free now to be who they really are? Will there be this massive, symbolic liberation resulting in a new wave of no crime and happiness?

In fact, I’ll tell you what I expect to happen. Let me make a little prediction here. The people who will have succeeded — the vast majority of the people who will have succeeded — in having the flag removed from public display, will largely remain as angry at 4:30 this afternoon as they have been. Give them a half hour to be happy. By 5:00, 4:45, 5:00, they’ll be back to being mad. There will be stress and there will be friction. And do you know why there will be all this remaining anger?

In their words their minds will not have been changed, will not have been made right following the removal of the flag. I dare say, if there is any genuine happiness after the governor signs the bill, it will probably be elected Democrats, because they will realize that yet again they have escaped blame for the flag going up on state grounds in the first place. Because yes, indeed, it was the Democrat Party that raised that flag. It was Governor Ernest Hollings who raised the battle flag in South Carolina.

They were totally responsible for it. It was another Democrat Party problem that they escaped historical blame for. Republicans somehow end up being inexorably tied to that flag. But let’s just see. Let’s just see how much happiness there is and how much contentment there is, versus the degree of anger that remains. And I think you know what I’m talking about. The victors are never happy, is the point. When they get everything they want, it’s never enough.

When they achieve every goal they claim to have, isn’t it remarkable how they are never happy? And the reason they aren’t happy is because even though the symbol is gone — the flag, even though it’s gone — they will realize that there are a lot of people who disagree with what’s happening. And that is what makes them really mad. They are intolerant of any dissent, and their real objective is to eliminate and wipe out all dissent. They’re not interesting in debate and prevailing in debate. That’s not something that jazzes them up. 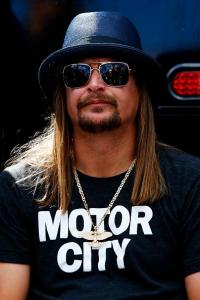 RUSH: Here is Kid Rock’s response. He actually sent a response to Megyn Kelly last night. His response: “You please tell the people who are protesting to ‘kiss my'” ask me some questions. The play on words allowed Megyn Kelly, who was reading the statement on live TV, to say the phrase “kiss my ass” without it being bleeped because she was quoting somebody. See that’s the difference, if Megyn Kelly had been talking to a guest… I don’t know, take your pick of a guest. “You kiss my ass,” they would have bleeped it.

But since she was reading the statement from Kid Rock, who said, “You tell those critics to kiss my ass,” she can say, “Kiss my ass,” because she was quoting Kid Rock and not have it bleeped just like I can do it here without having it bleeped because I’m quoting Megyn Kelly quoting Kid Rock. The bottom line is Kid Rock told them to go to hell. He’s not getting rid of the flag at his performances.