RUSH: I think Trump ought to get hold of this, this report that I have here in my formerly nicotine-stained fingers and start carrying it around and waving it around with him.

There is a group — and they admit they’re a conservative group — the group is called Family Security Matters. What they have done is researched and they have footnoted this thing like Apple patented the iPhone. They have footnoted this report. It prints out to 11 pages. Non-American… The headline of the story of the report is: “Trump is Right: Illegal Alien Crime is Staggering in Scope and Savagery — Non-Americans commit over five times more serious crimes per capita than Americans. It is estimated that there are some 133,741 foreign criminals in prisons and jails in the USA. …

“Add in the 168,680 convicted criminal immigrants who have final orders of removal,” i.e. deportation, “but who remain at large in the US, and another 179,018 convicted criminal aliens with deportation cases pending but who are also at large, and we have a total non-American felon population of 481,439.” Let me cut to the chase on this. The “non-American felon population” in the United States is currently at 481,439 people.

That “number the size of our 35th largest city,” and my adopted hometown, “Sacramento, California, and larger than the entire populations each of Atlanta, Kansas City, Omaha, Miami, Minneapolis — and more. … Looking at it another way, illegal aliens constitute 27% of the federal prison population. This means that a group which comprises less than 5% of the population nationally is committing 27% of the federal crimes. So just by that metric alone, illegal aliens commit over five times more serious crimes on a per capita basis than residents do.

“But here’s another fact.” We’re not through here, folks! “According to the US Government Accountability Office (GAO),” according to the Regime, “in an April 7, 2005 report to Congress entitled ‘Information on Criminal Aliens Incarcerated in Federal and State Prisons and Local Jails,’ ‘The percentage of all federal prisoners who are criminal aliens has remained the same over the last 3 years — about 27%. The majority of criminal aliens incarcerated at the end of calendar year 2004 were identified as citizens of Mexico.'”

Where have we heard Mexico mentioned in the news lately?

Oh, yeah! It’s been mentioned by the Trumpster, The Donald. Again, those numbers are from 2004/2005. Admittedly, there are a lot of numbers here that I have peppered you with. And they’re hard to follow. You forget the previous number when you hear a new number mentioned. So Family Security Matters is the website and we will link to this at RushLimbaugh.com. It will be up there at the top of our home page so you can click on it yourself and absorb the data. 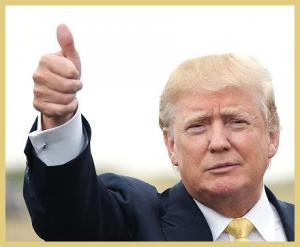 So the bottom line is that what Trump has been running around saying, he’s right. He’s more right maybe than he knows, or maybe he has been made privy to this. But the bottom line is, he’s right. He’s not making anything up and he’s not speaking in generalities. It just sounds like it because the numbers are so huge. So, again, we will link to that at RushLimbaugh.com, and you can peruse the whole thing. It’s very, very long and detailed and documented, as I say. Footnoted.