RUSH: El Chopo. Or is it El Chapo? El Chapo. So El Chapo gets out of jail, a mile long tunnel, one and a half kilometers, ventilated, built right under the Mexicans in their Mexico City jail, nobody knows how. The Drive-Bys are marveling, folks, over what an engineering feat it is, just like they used to marvel how Bill Clinton lied to them. The Drive-Bys are just stunned and impressed beyond all measure at how El Chapo built his escape tunnel. El Chapo, the biggest drug lord ever.

Greetings, my friends, and great to have you here. Rush Limbaugh back at it, brand-new week, broadcast excellence, 800-282-2882, the e-mail address, ElRushbo@eibnet.com.

And I’ll tell you what, (laughing) El Chapo is mad at Trump. Now, imagine this. Here’s El Chapo, whose actual name is Joaquin Guzman, not to be confused with any other Guzman that you might know. Joaquin Guzman, he’s head of the Sinaloa Cartel. It’s the largest cartel out there. It is the cartel of cartels. He flees this Mexico City prison and the first thing he did was get on Twitter to start bashing Trump? He starts calling Trump a midget. He starts threatening Trump. He tells Trump he will regret his words. He’ll be made to eat his words. He’s threatening Trump because Trump criticized Guzman’s escape.

My gosh, if you’ve been in jail for a year and a half or however long he’s been in jail and you run the biggest drug cartel in the world, the first thing you want to do when you get out is send a tweet to Donald Trump? (laughing) I mean, you couldn’t write a script. 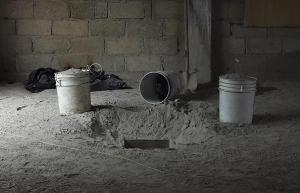 I doubt that he’s had time to get up there, but you never know. But everybody’s obsessed. El Chapo, I still… Folks, I just find it just delicious that one of the first things El Chapo does when he gets out of prison when he escapes is go to Twitter and attack Trump. By the way, do you know what “El Chapo” means? I don’t have exact translation. It means small. It means short. Yeah. So El Chapo. (interruption) Well, he might have a little Napoleonic problem. Who knows?

UK Daily Mail: “‘There is no prison big enough for such a small midget.’ … Mexico’s billion-dollar drugs [sic] lord taunts the world and threatens Donald Trump after his dramatic escape from max-security prison in tunnel dug under shower block.” He fled prison into Mexico City through this tunnel. He has reportedly taken to Twitter to gloat about his escape, and he’s posted threats about Donald Trump, who had criticized El Chapo’s escape. And he’s gloating. He’s gloating out there on Twitter about his escape.

He’s the head of the powerful Sinaloa Cartel.

He made his jailbreak Saturday morning and “is on the run from Altiplano jail, 50 miles outside of Mexico City… His audacious escape saw him dash through the mile-long ventilated tunnel system, which led to a building under construction next to the prison where he collected clothes left for him by his conspirators.” Everybody’s marveling at the engineering feat it was to build the tunnel. And then El Chapo’s goes to Twitter, tweets directly to Trump telling him he’ll “eat his words.” (laughing)

So El Chapo, apparently, is at least a Democrat when it comes to amnesty, and he’s livid at Trump for what Trump is saying about him and also about amnesty. (interruption) “Will cable news call this ‘the battle of the billionaires’?” I don’t know. I wouldn’t be surprised if they did. Now, Trump. Trump’s not an innocent here. Trump “has said that the Guzman embodies ‘everything that is wrong with Mexico’ and added he would ‘kick his ass.'” (laughing) Trump said (summarized), “See? I’m exactly right!

“This is exactly what’s happening, except these kinds of people are coming to America!” He used El Chapo’s escape to prove his point, and it’s ticked off El Chapo. El Chapo doesn’t like being compared to illegal immigrants, apparently. So he’s told Trump he’s gonna “kick his ass.” He used Twitter, hit back at Trump, because Trump says that El Chapo embodies everything that’s wrong with Mexico. (chuckles) Now, to be honest, El Chapo’s Twitter account is administered by his “son Ivan, the escapee reportedly wrote: ‘If you keep p****** me off I’m going to make you eat your words you f****** blonde milk-s*****.'” 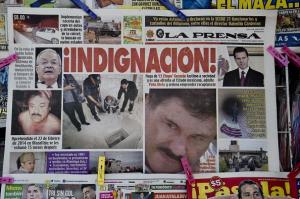 (laughing) “He also took aim at the Mexican President Enrique Pena Nieto saying: ‘And you … don’t call me a delinquent because I give people work unlike you you cowardly politician.'” So El Chapo’s claiming he’s a better employer than the president of Mexico, and dare I say El Chapo’s gonna become a hero. He’s gonna become one. To some people, he’s gonna become a popular hero. People are gonna say, “Yeah, he does give me work, man. I get plenty of work.” Other people are gonna come up and talk about the job opportunities that exist.

“El Chapo is supporting Mexico, and he’s making sure that dollars earned in Mexico stay in Mexico.” I can hear it all now.