Walker Makes It Official, Vows to Build Up and Energize the Conservative Base

RUSH: One of the most qualified Republicans made it official, Scott Walker, the governor of Wisconsin — who, as you know, if you listen regularly to this program — we have touted Walker’s qualifications time and time and time again. Here is a man who is conservative. You know what he said, by the way, in his speech? Name for me any other candidate — and there may be some — I just can’t recall top of my head. Name for me any other candidate who’s made this point. 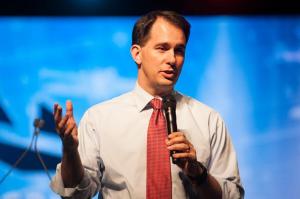 RUSH: Now back to Scott Walker. Scott Walker very flat-out says that his first order of business is going to be shoring up the conservative base, reaching out to the conservative base. Scott Walker believes that there are a lot of Americans who live their lives as conservatives but they don’t vote that way for the usual reasons. He thinks they are what we used to call the Reagan Democrats, and he thinks that he can go get them, because he has met them. As governor of Wisconsin, he’s traveled around, and he’s campaigned.

Because of whatever branding or other issues, they just don’t vote Republican. He thinks they can be persuaded to vote Republican. He thinks they can be told that he is their candidate and that Republican Party is their home. So that’s one of the outreach efforts that he’s gonna make. In addition to all of that, Scott Walker has a track record. Scott Walker doesn’t have to tell you what he will do if he’s elected because all he has to do is point to what he has done.

RUSH: Scott Walker. I just want to give you some details. As I mentioned the top of the program, “Wisconsin Gov. Scott Walker is poised to win a huge victory on education as the state legislature passed [his] budget that repeals state tenure guarantees while also slashing the budget of the University of Wisconsin. The victory was enunciated by the acquiescence of the university, which recognized its defeat by passing a spending plan that implements Walker’s cuts.

“All that remains is for Walker to consummate his victory by affixing his signature to the budget. The two-year, $73 billion budget approved Thursday makes a host of changes Walker has sought in the realm of education. Wisconsin’s school voucher program is expanded,” a great, graet conservative program, “and $250 million in funding is taken from the University of Wisconsin. ThatÂ’s down from the $300 million cut Walker originally sought, but still a substantial haircut.”

So not only has Scott Walker given choice to union workers — he’s given them choice to join the union or not, he’s given ’em a choice to pay dues or not — he’s eliminated compulsory dues in Wisconsin. He has ended ironclad, lifetime appointments for indoctrinators and propagandists (i.e., teachers). I would dare say Scott Walker is doing what a lot of people consider impossible: Plucking parasites off the state treasury one by one, and making public sector unions accountable.