RUSH: It’s an AP poll: “Hillary Clinton’s standing is falling among Democrats, and voters view her as less decisive and inspiring than when she launched her presidential campaign.” This according to the latest AP poll. “The survey offers a series of warning signs for the leading Democratic candidate. Most troubling, perhaps, for her prospects are questions about her compassion for average Americans, a quality that fueled President Barack Obama’s two White House victories.”

So apparently in the AP story, or the AP poll, Hillary does not show well on this whole idea that she cares about the little guy, that she understands the little guy. Now, I have a different take on this. I think Hillary should be congratulated on this 39% number. I mean, if you look at the nature of her illegal, unethical, and robotic behaviors with regard to her unauthorized e-mail server, destroying evidence under subpoena, selling access to the future White House while she’s secretary of state, taking all of this money. She is raising more money making speeches than some people will earn in a 10- or 12-year period, and she’s out there trying to come off as just an average, ordinary little guy?

I think the fact that she’s at 39% is worth celebrating. She ought to be at 19%. She ought to be congratulated on still being at 39%. That’s an amazing feat, given all the negatives that there are. She’s a terrible speaker, either behind a podium or off the cuff. Her e-mails reveal her to be a technological dunce. And I’ll tell you, you talk about the young vote, Millennials, the one thing that they are noticing about Hillary, and I think this that I’m gonna tell you here in a minute accounts for why Hillary is not performing well in polling questions asking about how much she cares about the little guy.

For example, Millennials love Uber and things like Uber. Millennials are living on their smartphones and their iPads. They increasingly do not watch television. They watch video. They watch video on demand on their phones, or on their tablets, or on their laptops, but they’re not buying big screens, and they’re not sitting themselves down in front of them. Some do, but, I mean, the trend is away from longtime, traditional behavior.

I mean, this is a generation that is not interested in getting on the ladder of success and climbing it and reaching the same goals that you had for yourself. You might have defined the American dream as home ownership. It’s not. The American dream for them is home rentership. They don’t want the hassles of owning. They can’t afford it anyway. They have a basic temporary throwaway type existence. Their attitude is why own something that’s gonna be — I mean, these are technologically oriented people. Their phones are outdated every year. They look at everything in society as being out of currency in a year or 18 months. Everything’s a throwaway. You don’t buy something and hold on to it for a long time, in their world.

Well, Mrs. Clinton has made a point of being critical of Uber, for example. Now, you may not know it, but that is enough to alarm a politically oriented Millennial who happens to think Uber is one of the greatest things ever to come down the pike. Now, the reason Mrs. Clinton opposes Uber is because Uber is not unionized, and her union buddies which give her a lot of money are totally opposed to Uber and things like it, Uber and Lyft. I mean, Millennials, when they look at renting an apartment, they go to Airbnb. They don’t call MLS or whatever the multiple listing service is. They’re priced out of it anyway.

When Millennials look at a maps app on their phone, you know what they look at? Transit directions. They don’t look at driving directions ’cause they don’t drive. Why do you think Apple is making a big deal of adding transit directions to their maps app this fall? Because Millennials love riding the bus. They love Uber. They love getting on a subway. Well, they may not love it, but they’re not getting in their cars driving.

So Hillary’s gotta bank on the fact that the young will not show up and vote.

She’s gonna align herself with her union buddies because that’s where her donations are gonna come from. I think that it’s all being reflected in this polling data of Mrs. Clinton, and not just among young people. I think people across the board have problems with Hillary. See, I think Hillary may be… I’m gonna admit to you this is wishful thinking. But Hillary may be one of the first Democrats to actually be figured out as phony, and not as hip and cool and “with it” as most young people think all Democrats are.

Hillary is not of their generation — and her daughter isn’t, either. Her daughter… You know, Chelsea cannot be said to be a typical Millennial. Chelsea lives in an $11 million apartment, a $10 million house over here and gets paid 600 grand a year for not doing anything at NBC. So Hillary’s 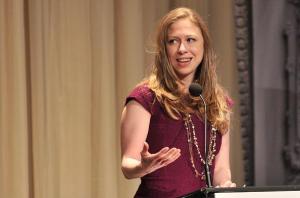 daughter is not your typical Millennial. So Hillary is not even exposed to it. Hillary and her husband are both still stuck back in the nineties, actually — and in Hillary’s case, she may be stuck further back.

But being at 39% in the polls largely, I think… I don’t know if it’s largely. But that area of the polling data where she’s doing very poorly is when people are asked if they think she cares about people like them. You know, Obama won that one 81 to 19 in exit polls over Romney in 2012. Hillary is underwater on that question in this AP poll, and I think it’s the youth. I think it’s the Millennials that are recognizing that, and to the extent they’re being polled, they are the ones saying so. So I think a tip of the cap to Hillary. Given all the negatives, she ought to be at 19%.

The fact that she’s still at 39%, that’s probably something that she should be celebrating instead of worrying about. But of course they’re not looking at it that way. I mean, Hillary’s an ex-hippie, but she’s not hip. Hillary has never been hip. She’s trapped in a 1930s mind-set, if you want to know the truth. When you run around saying that your hero is Eleanor Roosevelt, and you run around saying that when you were in the White House as first lady you ran around looking for the ghost of Eleanor Roosevelt for inspiration, that’s not exactly the kind of stuff that’s gonna relate to the fast, technological, on-the-move, throwaway culture that we have growing up among us now.