RUSH: We just had the notice, the news from the Jakarta Post that Obama wished Muslims happy Eid-ul-Fitr yesterday, celebrating the end of Ramadan. If you missed the tail end of the previous hour, let me just go through very quickly. “US President Barack Obama and First Lady Michelle Obama have conveyed greetings to Muslims who celebrate Eid-ul-Fitr in the US and countries around the world.”

It was an official notice from the White House yesterday, folks, which caused me to go back in time to the Grooveyard of Forgotten References at RushLimbaugh.com. I found this, ’cause I knew this was there. I had a vague memory, so I went back and I searched and I found it. It’s from the 20th of March this year. The headline at RushLimbaugh.com is: “Obama Addresses His People in Iran,” and here’s what this was about.

Now, keep in mind Obama has just wished happy end of Ramadan to Muslims all over the world yesterday in the Jakarta News. Back on March 20th I said, “You know, folks, that election in Israel, the victory, Benjamin Netanyahu, that has really confounded Obama. Do you know what Obama did? He recorded a video address to the people of Iran,” after the Israeli election, “and blamed the hardliners in both of our countries, he’s telling the people of Iran, for all the mess that’s going on in the Middle East.”

You don’t remember this? This was from my program on March 20th, 2015, just this year. After Netanyahu won the election, Obama addressed the people of Iran in a video presentation in which he “blamed the hardliners in both of our countries, he’s telling the people of Iran, for all the mess that’s going on in the Middle East.” It’s unprecedented? And it was happy Nowruz. Do you remember that? Okay, it was the Nowruz statement.

“President Obama has used the Nowruz statement to speak directly to the people of Iran. And what he did, he compared Iranian hardliners to Americans who are skeptical of his nuclear deal with Iran. So here’s the president of the United States speaking to the people of Iran. He is in the process of arranging and negotiating a nuclear deal with the mullahs of Iran, which will give them a nuclear weapon in ten years, if we are to believe what we’re being told about the deal.

RUSH: It was actually March 19th that the president addressed the people of Iran during the Iranian new year, which is Nowruz, and when you hear this — this is why I went back — it’s incidental that I found Obama wishing Muslims happy end of Ramadan yesterday.

And, by the way, that was in the Jakarta News. I’m not making this stuff up. Yesterday while all of this is going on in Chattanooga, Obama and Michelle are wishing Muslims happy end of Ramadan on behalf of the American people. Well, back in March, after the Israeli elections, Obama addressed the Iranian people on video.

OBAMA: Hello to everyone celebrating Nowruz across the United States and in countries around the world. Nowruz Mubarak. This year we had the best opportunity in decades to pursue a different future between our countries. Just over a year ago we reached an initial understanding regarding Iran’s nuclear program. I believe that our countries should be able to resolve this issue peacefully with diplomacy. Iran’s supreme leader, Ayatollah Khamenei, has issued a fatwa against the development of nuclear weapons, and President Rouhani has said that Iran would never develop a nuclear weapon.

RUSH: Then why do a deal? If the Ayatollah Khamenei has issued a fatwa against nuclear weapons, which, by the way, cannot be independently confirmed. We’ve searched. We’ve searched everywhere. Cannot find this fatwa. Normally fatwas, you can’t miss them. Fatwas are a big deal. We can’t find a fatwa. The Democrat Party has a fatwa against me, but we can’t find a fatwa from the Ayatollah Khamenei against nukes, but if he’s issued one and Obama said he has, then why do a deal.

OBAMA: The days and weeks ahead will be critical. Our negotiations have made progress but gaps remain. And there are people in both our countries and beyond who oppose a diplomatic resolution. My message to you, the people of Iran, is that together we have to speak up for the future we seek. It’s up to all of us, Iranians and Americans, to seize this moment and the possibilities that can bloom in this new season. Thank you, and Nowruz attan peruz.

RUSH: Okay, we’ve got Nowruz Mubarak. And Nowruz attan peruz. Does anybody remember a president ever before Obama saying happy whatever to Muslims all over the world and their holidays? I don’t remember Bush doing that. He may have. I know Bush, with his outreach to Iraq, there might have been addresses to the Iraqi people in which — but I just don’t remember it. I don’t remember 57 states, either, but ever since Obama’s become president, addressing the Iranian people and Nowruz Mubarak and Nowruz attan peruz. And, yeah, we got hardliners here just like you got hardliners there,, but we don’t listen to them here, and you don’t listen to ’em there. Together we’re gonna come together and make a deal even though the Ayatollah Khamenei has issued a fatwa against nuclear weapons.

What in the world is going here? The president addresses his people, the Iranians, to everybody celebrating Nowruz across the United States. Do we let people out of school for Nowruz? Is Nowruz a three-day holiday in America that I’m also missing that nobody’s telling me about? (interruption) You think it is in some cities? Well, okay, it’s just gonna be another three-day weekend that I’ve been screwed out of for I don’t know how many years we have been celebrating Nowruz and nobody told me. 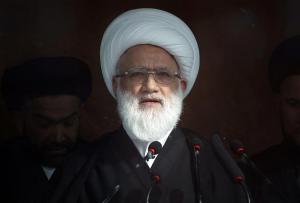 So what cities do you think it might be a holiday? (interruption) De Blasio’s city in New York? You mean like Dearbornistan? You think they happy Nowruz in Dearbornistan? Well, all I know is I never heard of it, and I don’t know if we let kids out of school for it. It’s New Year’s, it’s Iranian new year. Is there this big thing in Times Square that nobody knows ’cause it happens in March? I never knew any of this stuff. We never had presidents doing any of this stuff, talking to leaders, the people who are imprisoned by state sponsors of terrorism, giving them credibility and human circumstance.

RUSH: Snerdley, you were right. “New York City Public Schools to Have a Muslim Holidays Off.” CNN had a story back on March 4th of this year, like a week before Obama addressed the Iranian people to wish them Happy Nowruz Mubarak. “New York City public schools will now observe two Muslim holidays, officials announced Wednesday, making the district — the nation’s biggest — one of the few to put Islamic holy days on its calendar. … [T]here will be no class for Eid al-Adha … Eid al-Fitr — a festival marking the end of the holy month of Ramadan — will become a holiday for those in summer school starting in 2016.” I guess Nowruz, the new year, is the second. You’re right. It’s New York City. Happy Nowruz.

RUSH: “George Bush wishes Muslims well on Feast of the Sacrifice.” December 2008: “US President George W Bush has wished Muslims around the world well as they celebrate the Muslim feast of Eid al-Adha.” It’s all Ramadan related. This is in the UK Telegraph, by the way. Didn’t know it. And then a presidential statement from the office of the press secretary in the White House, December 5th, 2002, just 15 months after 9/11, “President George W. Bush Commemorates Idul Fitri,” again, Ramadan. So Bush did.

Now, he did make videos for the Iranian people or the Jakarta people, but they issued statements. They weren’t trumpeted like Obamas are, but they happened. So it just leads me to a different conclusion. All of this suck up, which is what this is, I mean, 15 months after 9/11, and we’re wishing — that’s the kind of stuff I was talking about in the first hour. Ever since 9/11 first happened, from the moment after we lost 3,000 people we started sucking up to the people that did it. It has never made sense to me. I’ve never understood the strategy behind it, unless the strategy comes from a position of fear. “Please don’t do it again. We’re sorry. Whatever we’ve done to irritate you, we ask forgiveness.” I don’t understand it otherwise.

I know we didn’t beg the forgiveness of the Japanese after they hit us at Pearl Harbor. I know we never asked Hitler to forgive us or anybody else that we’ve faced as an enemy. This is all new to me since 9/11. But despite all the suck up, apparently it hasn’t worked. They’re still trying to kill us. All this reach-out, all this, “Hey, we love you, hey, happy holidays, hey, happy Nowruz, see you in the choom gang,” whatever, it’s not working. So why do it? What’s the point? Get the votes of the moderates? The independents? I don’t understand it.