Did You Know Thousands Rallied Against the Iran Deal in Times Square? 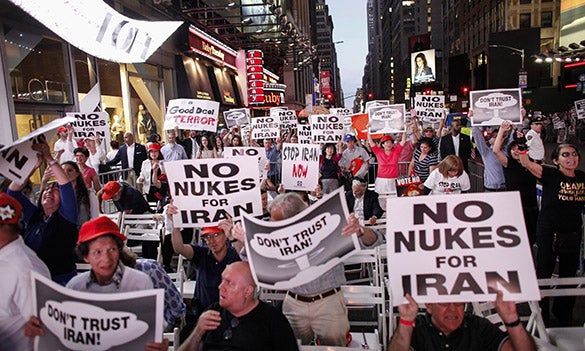 I read the story, I read the text on the Eyewitness 2 news website, but there’s no photos, and I didn’t see any video, so I haven’t seen any footage. There has to have been some. I mean, the news, the media, they take footage of everything. It’s kind of like that video the LA Times has of Obama meeting with Kahlil Gibran or whatever, the anti-whatever big fundraiser, anti- this, anti- that. They won’t release that video. They wouldn’t back in 2008. And I guess this footage from the massive anti-Obama Iran deal in Times Square last night is gonna remain hidden, too. I don’t know what we could do to force them to air it or to publish it. Maybe somebody’s seen it. I haven’t. (interruption) You haven’t, either? Well, we’ll keep a sharp eye.

I have, ladies and gentlemen, here in my formerly nicotine-stained fingers (shuffling paper), I finally found a picture of the anti-nuclear deal protest in Times Square, and I’m gonna turn the Dittocam on here and show you the picture. There it is. Pretty big, wouldn’t you say, Mr. Snerdley? There’s a lot of people there. This picture is the only one I have seen.

This was last night an anti-Obama-Iran nuke deal rally in Times Square. We will also put this up at RushLimbaugh.com so you’ll be able to have a better shot of it, digital shot of it if you want to be able to spread it around to people. ‘Cause honestly, we haven’t seen any video.