Does John Kerry Think the Iran Deal Will Launch Him to the Presidency?

But it hasn’t been disavowed by the Ayatollah Khamenei, so maybe it’s real. It’s a silhouette of Barack Obama holding a pistol to his head. You haven’t seen this? (interruption) Oh. I’m sorry. I thought everybody had seen this by now. You got an American flag here on the left. It’s a little square photo here. It’s an artist’s rendering, and silhouette of Obama. On the right side, the right border of the graphic, he’s holding a gun to his head. The tweet from the Ayatollah Khamenei says:

US president has said he could knock out IranÂ’s military. We welcome no war, nor do we initiate any war, but… pic.twitter.com/D4Co7fVuVg

“We welcome no war, nor do we initiate any war, but if any war happens, the one who will emerge loser will be the aggressive and criminal United States. The US president said he could knock out Iran’s military,” and they weren’t through. “Iran hit out Friday against US Secretary of State John Kerry,” Lurch, who by the way served in Vietnam, “accusing him of threatening military action against Tehran if it fails to respect a historic nuclear deal sealed on July 14.

“‘Unfortunately the US Secretary of State,” who served in Vietnam, “once again talked about the rotten rope of ‘the ability of the US for using military force,”‘ said Iranian Foreign Minister Mohammad Javad Zarif in a statement. Zarif decried what he called the “selessness of such empty threats against the nation of Iran and the resistance of the nation of Iran,’ and said such remarks should be consigned ‘to the last century.'” Meanwhile, Iran has now banned international inspectors from their military sites.

Therefore, there’s no baseline. I mean, we have only our own intelligence, whatever intel gathering we’ve had to tell us how far along, because they are not required to demonstrate what kind of success they’ve had. That takes away any opportunity to establish a baseline to measure further development against any present level. We know what present level is, and the primary nuclear research took place at a singular military base which (because of the side deal number) two is off-limits. 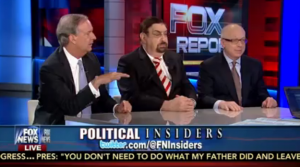 And Iran has vowed to bar international inspectors, IAEA, from all military sites. Now, I don’t know if you heard this or not. I didn’t see it. I got a note about this, and I’m frankly surprised I haven’t seen anything about this anywhere, but apparently there was a show on Fox last night, the Fox News Channel, at seven o’clock, Political Insiders or some such thing. The panel on this show was Doug Schoen, Pat Caddell, and John somebody. I don’t know who the third guy was. John somebody.

These guys said, the discussion of this show was that John Kerry is planning a run for president based on the Iranian deal for which he thinks he’s gonna get the Nobel Peace Prize. And that will be the basis for his presidential run. Now, all of these guys, Doug Schoen, Pat Caddell, and John somebody agreed that Hillary is circling the drain and in big trouble. And they also point out that Algore’s sitting back watching everything, that he wants to run.

And then of course there’s another wild card out there, and that’s Biden, Vice President Biden. But I haven’t seen anybody even talking. I haven’t been able to watch everything today, obviously. I mean, I watch everything out of the corner of my eye, and if a picture or something on the screen grabs my attention, I stop and look at it. If I happen to read something that goes by on closed captioning, I stop and look at it. I haven’t seen anything on this. It’s like this Fox show occurred in a vacuum last night.

RUSH: Here is an audio sound bite of what I was told happened, I didn’t see it myself but I was told it happened on Fox last night at seven o’clock. The Fox Report, normally it’s hosted by Harris Faulkner. I never would quote Harris Faulkner here. Don’t be alarmed. She wasn’t there. The fill-in host was Julie Banderas. The guest was John LeBoutillier. I love saying that name, “John LeBoutillier,” a member of Congress from New York; Doug Schoen, the Democrat pollster; and, let’s see… Pat Caddell was on this show. Let’s see. Yeah, John LeBoutillier. And listen, here. The question was, “Do Democrats have a Plan B if Hillary blows up? What is it?”

LEBOUTILLIER: Kerry wants to run. This Iran nuke deal, which —

BANDERAS: I want to talk about that in a moment.

LEBOUTILLIER: Is that true?

LEBOUTILLIER: We have talked about Kerry doing this Iran nuke deal. In his head he thinks he’ll get the Nobel Peace Prize —

LEBOUTILLIER: — and use that as a springboard to run.

RUSH: That’s Doug Schoen! “I think that’s certainly plausible.” (sigh) Man, if that happens? You talk about depressing and dispiriting? John Kerry get a Nobel Peace Prize? It was bad enough when Obama got his on the come, and now this! LeBoutillier is who’s saying that Kerry is gonna win that peace prize and then use that as a springboard to run for the presidency again, something Schoen thinks is entirely plausible.