RUSH: I got from our official climatologist, from a little book from 1909 titled On Safari with Theodore Roosevelt. Theodore Roosevelt, former president United States, beloved. “Between the two of them, Theodore and Kermit slew 512 beasts including 17 lion, 11 elephant and 20 rhinoceros. The remaining animals were no doubt happy to see TR leave the plain.” This was a year-long safari. I don’t know how familiar you are with the life of Theodore Roosevelt. I don’t know when the guy slept. 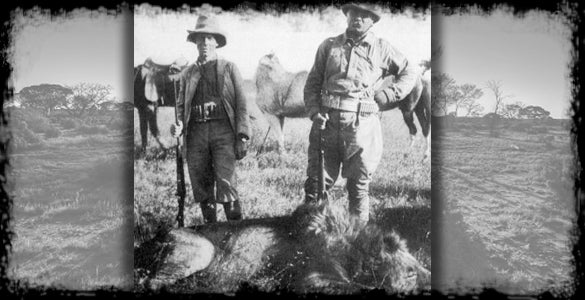 I mean, the guy was in the Rough Riders in Cuba. He’s on safari in Africa. He’s running all over the world. He’s in this war and that war. He’s running museums. He’s the first environmentalist wacko. He was the president of the United States. I don’t know when he slept. And there was never any air conditioning when Teddy Roosevelt was running around doing things, like we were talking yesterday. You know what I think about, by the way, Snerdley, when I think of all those years…

Logging the progress that we have made. Anyway, Teddy Roosevelt and his kid Kermit go on a safari in Africa for a year. They kill “512 beasts including 17 lion, 11 elephant and 20 rhinoceros. The remaining animals were no doubt happy to see TR leave the plain. After the year-long hunt, Roosevelt proceeded to England for the funeral of King Edward VII and then on to Norway to accept the Nobel Peace Prize for his part in ending the Russo-Japanese War.”

Theodore Roosevelt. I remember my grandfather talking about him, revered him in countless, countless ways.

RUSH: At times like this, if you do anything or are perceived to be doing anything that constitutes going against the grain of the narrative, then you can easily end up being called a reprobate or heartless or cold or mean-spirited or what have you.

Like I said yesterday, when I saw that this lion had been killed, and when I found out how and how needless it was… I love animals. I love everything about them, and I hate the needless killing of them for sport like this. This was senseless. But at the same time I’m a realist here, and I know how the whole animal rights movement has been elevated and used to advance the leftist agenda. And I realize, if you’re new to the show and you hear something like that, you think it’s crazy.

“Are you kidding me? You really? Animal rights are part of a political…?” Yes, I do. And the quicker you people who have that kind of reaction to me learn that I’m right about this, the much faster you’re going to learn the truth of things. Because everything the left does… If you know what the left and the Democrat Party is, everything they do is political. Every movement, every cause they have is a political cause designed to advance their agenda and eliminate opposition.

The whole animal rights thing has been around as long as I’ve been alive. It has as its objective the same thing global warming has, and that is to establish the need for growing and bigger government that controls more and more people because the premise is people can’t be left to run their own lives because they’re irresponsible. “Look what happens if we don’t regulate them. They’ll run out and they’ll kill innocent animals! We must have a government with a series of regulations and laws and appropriate punishment for when this happens.” 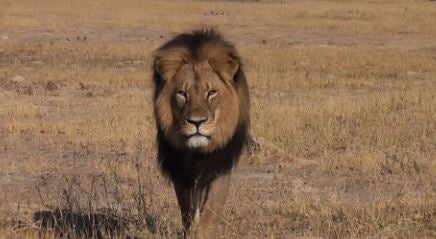 And then people say, “Yeah, yeah,” and they applaud their freedom away. They applaud their liberty away. And that’s what the leftist agenda is all about. It is predicated on the belief that you as a human being are incompetent to live your life in a way that the left, the Democrat Party, would judge to be responsible and caring and compassionate and giving. The animal rights movement is ideal for this, because there isn’t anybody that hates animals that is going to have any kind of a following.

Just like the environmental movement. Nobody wants dirty air. Nobody wants dirty water. But the way they set it up is if you oppose them, oh, you must be for dirty air. Oh, you must not have a problem with dirty water. No, I don’t like those at all. So, it’s brilliant the way they set these things up and they get… Remember what I said yesterday: Liberalism is the pursuit of the emotional. It’s much easier to build a movement and attract followers connecting to them emotionally than it is intellectually.

And conservatism, or everything else it is, is an intellectual pursuit in addition to whatever else it is. And there’s nothing intellectual, pursuit or otherwise, about liberalism. It’s all emotion. And it’s all feeling and wanting to feel good and not wanting to feel guilty. So all that’s capitalized on. So if you come along… Now we’ve got the circumstance with Cecil. They named a lion. And, by the way, I, ladies and gentlemen, am as guilty as anybody else of something.

Twenty-five years ago on this program, I explained one of the most brilliant techniques of the animal rights movement and the left, and that is… And, by the way, they didn’t need a whole lot of help because we humans do this ourselves anyway, when left to our own devices. But we humanize, particularly our pets. We treat them and think of them much as we do other people. We assign them human feelings. We assign to them human emotions and human instinct and we treat them as such.

And then when we were children, what did we do? We read books about animals, cute and cuddly, that talked and had normal human lives. We saw cartoons of the same thing. And so all animals — including the vicious predator animals that will kill you just for looking at them — are made warm and cuddly and innocent and untouchable, unapproachable. And, as I say, I myself am as guilty as anybody, because I’m writing children’s books with a talking horse that time travels.

So it’s something that is a time-honored technique. So anytime you come up with information that goes against the grain of a popular narrative… You remember, Snerdley. This had to be very early on in the program. I remember a couple of times. I think it was dolphins or porpoises. A couple of fish were caught in Canada in an ice floe, and they couldn’t get out, and it became a big story about how we were trying to help these two fish, whatever they were, get out of the trap they were in.

They might have been baby whales. I forget what it was. I remember back then people going, “It’s just a couple of fish, for crying out loud! Why are we covering this wall to wall?” Callers, they’re asking me, angry, “Why is this all over TV?” I’ll tell you why. It’s because those two fish, this is exactly what I said yesterday about Cecil the Lion. By the way, did you think Cecil knew his name was Cecil? Do you think Cecil knew he was a lion? No way. Does a fish know it’s in water? No.

Now, see, I’m creating enemies. I’m making them. That’s so unfair, so unfair. Then you start trying to explain that there is no equality in the animal world. And you want to talk about animal right? When you watched… Did you see the video of a… Folks, I’m not kidding about this. It’s going to make you sick. I actually saw the video, some kind of snake actually devour a whole crocodile. Was it a boa constrictor? It took a month to digest, and they had pictures of the whole alligator being digested. 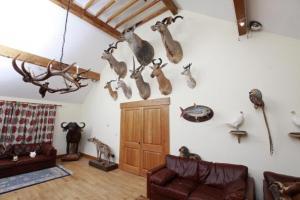 Now you can bring a little kid to the video and say, “Do you want to talk the rights of the alligator here?” (Kid voice) “That mean snake! Why would the snake do that?” The snake has to eat. So here’s the news, and this is from an op-ed, March 17, 2013, New York Times. Are you ready? Wait for it. “Saving Lions By Killing Them.” See, I’m going to be hated here. I didn’t write the story. All I did was find it. It’s in the New York Times, two years ago, a little over two years ago.

It was written by Alexander Songorwa, who is the director of wildlife for the Tanzanian Ministry of Natural Resources and Tourism. From the op-ed: “Odd as it may sound, American trophy hunters play a critical role in protecting wildlife in Tanzania. The millions of dollars that hunters spend to go on safari here each year help finance the game reserves, wildlife management areas and conservation efforts in our rapidly growing country. This is why we are alarmed that the United States Fish and Wildlife Service is considering listing the African lion as endangered.

They’re just going to write that off as some lunatic, odd ball weirdo. I’ve always said, “If you have a species that’s endangered and you want to save it, eat it!” (impression) “How can you say that? That’s so mean. That’s so… Oh my God, you’re really mean. You can’t possibly mean that, Mr. Limbaugh.” “Well, let me ask you, Little Johnny: Are cows on the endangered species list? Are chickens on the endangered species list?” “No. No.” “Why is that, Little Johnny? Because there’s whole bunch of gobs of them.”

“That’s right. Why are there gobs of them? Because God made it that way?” “No, there are gobs of them because they are produced, so that we can survive ourselves. We consume them. We eat them.” “It’s just so mean! It’s just so mean!” So if there is an animal that’s on the endangered species list and it’s edible, turn it loose. Make it part of a human diet and there will be more of those animals than ever. Some free-market, entrepreneur farmer will come in and start raising those animals to supply the need.

Now, I realize, talk like this is blasphemy in the era here of Cecil the Lion, but that’s what I like to do. (interruption) No, I’m not talking about eating Cecil. No, no, no. This guy’s not talking about eating lions. He’s saying hunting them creates more of them, because the game preserve needs to attract the hunters. So, the conservation people take steps to make sure that the lions in their preserve have circumstances where reproduction happens and takes place. They encourage it.

There are more lions, because there are hunters than there would otherwise be. That was the guy’s point writing the op-ed in the New York Times. It’s not to excuse this dentist. This is a whole different thing. What this dentist did — what he was led to doing, whatever the nature of the truth here is. This lion was not some place where hunting should have been taking place. That’s not the purpose this lion served. So, I’m not conflating the two, but I’m just trying to be the mayor of Realville here.