RUSH: Folks, get a load of this. This is Hillary Clinton. This is today, Claremont, New Hampshire, at River Valley Community College. It’s a town hall campaign event, and Hillary decided that she would talk about something she’s responsible for, and that is the lack of civility on the Internet. Yes, I knew that would get your attention. I knew that would get your attention! She doesn’t say she’s responsible for it. I’m saying she’s in part largely responsible for the incivility on the Internet. I’ll explain why in a moment. It should be obvious. But here’s what she said…

HILLARY: The level of vitriol and insult that we see on the Internet is so distressing to me. To exercise good, old-fashioned politeness, you know, the — the feelings that come out over the Internet, you would never say that to somebody standing in front of you. I just see this because, uh, occasionally I’m the subject of it. I — I know no one is immune from it.

RUSH: She doesn’t have the slightest. This is the woman who got together with George Soros and helped fund the creation of Media Matters for America, which is largely responsible for all of the sewers on Twitter and all these campaigns designed to damage, destroy, whatever they disagree with. There isn’t anything civil about it. All of this lack of civility is a Democrat Party tactic. It is part of the community organizers’ owners manual.

It’s part of the operating system of community organizers, the lack of civility is precisely that. I mean, Mrs. Clinton, AFL-CIO, the SEIU? These are the people that show up at Tea Party groups and actually begin engaging in physical violence! It is not a matter of people hiding on the Internet saying things that they wouldn’t say in public. They show up, and they say these things in public, and they put their fists behind it sometimes. I am dead serious. The lack of civility on the Internet? You can trace it back to things.

You can trace it back to people. 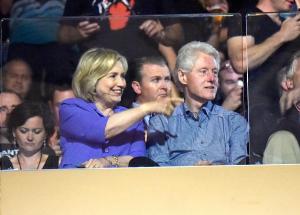 Now, the format itself lends itself to this because of the anonymity, and it has highlighted the dregs of our culture and society, and it has let us know that they are there. But in my experience, you don’t find conservatives behaving this way, treating people with ill manners. We’re obsessed with the exact opposite. Many on our side believe that we kill ’em with kindness, show them courtesy as a way to battle this kind of stuff. This is one of the reasons…

If I may double back, one of the reasons they get away with this lack of civility on the left is they’re never called on account for it. They’re never called on the carpet for it. They’re never criticized for it, anywhere, in the Drive-By Media. And what about Harry Reid accusing Mitt Romney of not paying his taxes for ten years? What about the entire Democrat campaign accusing Romney of not caring that a former employee’s wife died with cancer because Romney didn’t care enough about her health care?

Name your allegation. Name the accusation that is made by Democrats. The incivility is not just on the Internet. It’s on the floor of the US Senate! It’s in major American media outlets. It’s all over the place. It’s a tactic utilized by the left. For Mrs. Clinton to whine and moan and complain about it? Sorry. It doesn’t carry any weight with me. This is the woman who buys and pays for it when it benefits her.