RUSH: Don Lemon, CNN last night interviewing… It’s a YouTube channel, these two babes, Lynette Hardaway and Rochelle Richardson we played the other day, who were upset the way Trump was treated in the debate. Well, Don Lemon went out and found these two babes and had ’em on his show last night. He said, “You guys…” Wait a minute. Didn’t we have a story not long ago that women don’t like to be called “guy”? (interruption) That that’s sexist, if somebody says “You guys.” Here’s Lemon. He said, “You guys are very passionate about your feelings about Donald Trump. How did you decide that Trump was your guy?”

HARDAWAY: Well, basically we looked at the TV and saw that he was gonna be running for the president. And when I looked at him and I looked at his ideas and he was talking my language, pretty much, I said, “Oh, my God! This is gonna be our next president right here,” and I just felt it. I knew it. He resonated so well with me.

RICHARDSON: He resonated to me, too. Listen, he said he was gonna secure that border —

RICHARDSON: — and then he’s gonna bring jobs back to Americans.

RICHARDSON: So that means that Americans not only are gonna just be surviving but —

RICHARDSON: — they’re going to be able to thrive in this country, Don! And that’s what I love. He is going to make America great again.

RICHARDSON: He is going to make America great, and that’s why I stump for the Trump.

RUSH: Say what it is! “Oh, yes, he is! OMG!” These two women symbolize, I think, an unreported, overwhelming problem for the Democrat Party.

RUSH: Now, back to these two babes here, Lynette Hardaway and Rochelle Richardson, CNN last night. Did you hear them? Did you hear them start telling Don Lemon why they like the Trumpster? Every reason they gave was specific to an issue. Of course the establishment’s out saying, “Trump is gonna fall flat on his face eventually, Rush, ’cause he’s not getting serious about anything. He doesn’t specify anything. You ask him about his position on this and he obfuscates! He never gets specific.”

Well, these babes think he is. I guarantee you that Lynette Hardaway and Rochelle Richardson think he’s specific. They start saying, “He’s gonna bring jobs back to America! He’s gonna make America again. He is gonna close the border. He’s gonna fix immigration! This country is going to thrive again.” They hear specifics. Now, let’s move to the next sound bite. This a montage from yesterday and last night. It’s a cross-section of Drive-By Media people and conservative analysts with the new reason (there is a new reason every day or two) why Trump is eventually going to implode.

This reason he can’t win and why he will implode is that he does not give “specifics.”

JONATHAN KARL: Trump, who has been very light on specifics…

CHERI JACOBUS: He has not come out with specifics! 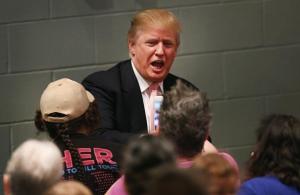 BETSY WOODRUFF: On most tricky policy issues, he can’t give specifics!

KATE BOLDUAN: Got to talk about the policy specifics.

KATY TUR: He offers no specifics!

CHRIS CUOMO: He didn’t want to go anywhere on the specifics.

BRIANNA KEILAR: Long on rhetoric but short on specifics.

RICH LOWRY: He has no specifics!

DOUG HEYE: Getting to Trump is getting at the specifics in the policy. The devil are in the details for Donald Trump, and I think that’s ultimately his downfall.

RUSH: Well, here we go again. Why, when Cheney was named Bush’s veep, it was “gravitas.” Every damn person said it. We must have had 30 different media people that all used the word “gravitas” to describe Bush’s choice of Cheney. Now it’s not 30 people here, but it’s a bunch of ’em, and they all say, “No specifics! No specifics!” Last night Birch Run, Michigan, Trump held a press conference. Question: “We haven’t heard a lot of specifics. We talked to people outside the venue today and they said, ‘Where’s the meat on the bone?’ When are your gonna tell us your specifics?”

TRUMP: You’re gonna see lots of plans. Also… And — and you have to understand when you’re coming up with a plan in business you have to be flexible. There’s gotta be the flexibility. And I recently brought something — not so recently, but — Doral in Miami. Everybody wanted it. If I would have sat down and said, “Here’s a 12-point plan,” in order to get Doral… I didn’t do that. I went in and punched and punched and beat the hell out of people, and I ended up getting it. Everybody wanted it. All of the smart money wanted it. I know how to get things done. You can’t sit down and say, “Well, I’m gonna come up with a 19-point plan to get the old post office and create it into a great hotel on Pennsylvania Avenue.” The most sought after property, I think, in the history of the General Services Administration. Trump got it!