RUSH: Here’s Sharon in Sumrall, Alabama. It’s great to have you with us. Hi.

CALLER: Well, hi, Rush. Thanks for helping us to keep us sane out here.

CALLER: We need you. But I have a question. If Hillary did not use her personal server to receive and send sensitive information, what did she use? A paper courier? Did she meet with everybody face-to-face? Did she use a secure land line, maybe her BlackBerry? It doesn’t matter; they’re all required to be recorded by law, so where are the records?

RUSH: Excellent question. Has Hillary said that she didn’t engage in sending and receiving classified data on the server? She has, hasn’t she?

CALLER: Apparently. She was not in any possession of any sensitive information whatsoever.

CALLER: So we know she had to handle sensitive information every single day.

CALLER: So how did she do it? Face-to-face? Through the mail? Personal couriers?

RUSH: No. She did it via e-mail like everybody else does it. That’s why they have these secured systems at US.gov and so forth that she wanted to go outside of because she was doing things that she didn’t want anybody else to know about.

CALLER: Exactly! So if she didn’t use that, she used something else, and there are records of it. So where are the records that she is required to keep?

RUSH: You’re not supposed to ask any more questions after that, Sheryl.

CALLER: Right. They were never there. (chuckles) They were never any records or she could come up and say, “Oh, I asked you this; I used that. Here’s my BlackBerry. Here’s all my e-mails and my texts.

RUSH: No! At the first she said she only used one device.

RUSH: She couldn’t use two devices. It gets too confusing out there.

CALLER: Right. So she has no records; she kept no records. That’s illegal. Whether they’ll ever do anything about it, we’ll all hold our breath, I’m sure.

RUSH: I think even beyond that incredulity is the fact she’s asking us to believe that they never exchanged any written classified information.

CALLER: Or any other kind. Not by courier, not face-to-face. If you’re face-to-face, you have a secretary taking notes. If you’re on the phone, even a secure land line, you have records of that, and whether they’re, you know, verbal records or written records —

RUSH: There are transcripts of all of these things in case there are disputes down the road —

RUSH: — in who you’re selling out the country to.

CALLER: So she wants us to believe she used something else. Where is it, and where are the records from it.

RUSH: (chuckles) They have to… Your point is they’re somewhere.

CALLER: Yes. Well, I mean, if she didn’t use her own personal server, she had to have to used something else. So simply tell us what that little was and give us the records. No big deal; it’ll all be done.

RUSH: Oh, wait a minute, now. You’re adding a new wrinkle here. You’re saying she used something plus her server, beyond her server, in addition to her server to communicate?

CALLER: Well, if she didn’t use her server, she had to use something, a BlackBerry, you secure land line, personal couriers, bringing papers back and forth, 24/7, or she had to meet with each and every person face-to-face.

RUSH: Well, none of that happened. You know damn well!

CALLER: (chuckling) Of course not. She must think we’re stupid.

RUSH: No, no, no. Well, she does, but that’s not it. No, no. I’ll tell you what they think. Within the Clinton campaign. I’ll tell you what she’s telling them: “This is just what always happens with us. This storm, we just ride this out. It’s gonna be okay. It will be old news in a couple of months, maybe three weeks.”

RUSH: No big deal, nothing to see here.

CALLER: (laughs) Been there; done that.

RUSH: Yeah. “Been there; done that. It’s just typical of what happens to the Clintons and us on the team.” Now, privately whether she thinks it’s a big deal or not? Who knows?

CALLER: If she didn’t use her server, which has been wiped cleaned — and whoever wiped her server, I fray to goodness that they leave the country and watch their back, because we know what happens to people that help the Clintons.

CALLER: Well, we wouldn’t want one to commit suicide and —

I can’t tell the number of people, when computers… For me, computers became part of my daily work routine in 1996, ’97, when him I get my first Apple IIc and then I went up to a Mac. And then in the late eighties, early nineties and all the way through the nineties I’d run to people who’d say, “Yeah, yeah. I gotta take class.” No, don’t take a class. Just go get a computer and start. What do you mean, ‘take a class’?” I’ve never understood this “take a class” business.

“But there are, Rush! I mean, can go take a class on how.” I know you can, but why don’t just go get a computer and use it? “I don’t know.” It was a very frustrating thing to me. I don’t know why. Just was. And I’m thinking of Mrs. Clinton as one of these people. Go get a book on e-mail? Just do it! Or hire a tech nerd to explain it to you. But anyway, she did. She went out, she requested a book with tips on how to fully delete e-mails, as well as warnings about the possibility of a subpoena.

Now, I have this from ABC News. There’s a Daily Caller story on it. “The last batch of Hillary Clinton emails released by the State Department included one from Clinton asking to borrow a book called ‘Send: Why People Email So Badly and How to Do It Better,’ by David Shipley and Will Schwalbe. Clinton has not said why she requested the book, but it includes some advice that is particularly interesting in light of the” news today. “The copy that ABC downloaded…”

You can get this book for ten bucks. ABC got an e-version of it. “Chapter Six: ‘The Email That Can Land You in Jail.’ The chapter includes a section entitled ‘How to Delete Something So It Stays Deleted.'” She didn’t know anything about e-mail, but she knew enough to ask for this book or a book about it? ‘Some people are hoarders, some are checkers,’ the authors write. ‘The main thing to consider is that once you do decide to delete, itÂ’s like taking the garbage from your kitchen and putting it in your hallway. ItÂ’s still there.'”

Mr. Snerdley, let me just run a little pop quiz. I’m not trying to put you on the spot. I’m not trying to embarrass anyone. Do you know what actually happens when you delete anything on your computer, delete an e-mail or you delete a file? When you drag it to the trash, do you know what’s happening there? Tell me? (interruption) Mmm-hmm. (interruption) Very, very good. Very close. Here’s what happens.

When you delete a file — e-mail, doesn’t matter. When you delete it, put it in your trash can, however it happens on your computer, what happens is that it’s not deleted. It remains on your hard drive until that space is needed by something else. All you’re 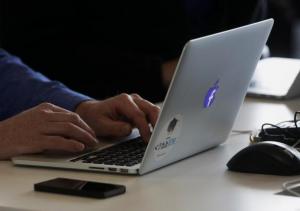 When you put it in the trash, you’re removing the protection. It’s still there. It will be there forever unless you take further steps to actually permanently get it off of the server, all the bytes that make up that file. Now, the way it usually happens is, you delete whatever it is you delete, and then you keep using your computer, and it could be years before you’ve added enough information on the computer that you need the space that that file you deleted took up, and that’s when it will be over written.

But even then there are, shall we say, bits of evidence of it remaining.

There are fragments that are still there.

So there is just deleting something and it’s still on the server or the hard drive or wherever the file is located. All that happens is, the protection that keeps it from being overwritten by something else is removed. But if it’s not needed, if the space you’re deleted file is taking up isn’t needed, it’s gonna always be there. I’m sure that that’s what she was trying to find. I’m sure this book explained this. I don’t know how technical the book got, but here she is asking for a book on deleting e-mail and how to stay out of jail e-mail.

You’ve gotta be be kidding me.