What Would Mr. Buckley Think of Mr. Trump?

RUSH: Albert in San Francisco. Albert, you’re next. It’s great to have you on the program. Hello, sir.

CALLER: Hi, Rush. I had a question for you, or two questions, actually. So my wife and I saw The Best of Enemies last week. It’s a documentary on the ’68 debate between William F. Buckley and Gore Vidal. I was kind of getting what you thought of that whole time period and that movie in general. And to bringing it back to today, what do you think William F. Buckley would think of Donald Trump?

RUSH: Okay, I haven’t seen the movie. I haven’t seen the documentary. That era was a fantastic era. Many of those debates, a couple of them actually occurred I think on the Dick Cavett Show, and Buckley insulted Gore Vidal with a homosexual slur that I don’t think today would… Back then, it was not even acceptable, but today would it be doubly not acceptable. But it was different times.

They were both literary, of course, and there was much less media then, so those kind of things happen routinely, I think, in our culture today, just in different forms. I think what Buckley would think of Trump? Probably for lessons there, take a look at what Buckley did to Pat Buchanan. Pat Buchanan had written a couple of columns that were thought by many to be anti-Semitic in his references to Israel and the AIPAC, the lobbying group.

And Buckley did write a piece saying that he, after careful thought, did consider Buchanan to be anti-Semitic in those instances. Buckley, of course, succeeded in excommunicating the John Birch Society from the conservative movement and so forth. So my guess is that Buckley would be amused and would get as much out of it as he could, but, at some point, he would probably denounce Trump.

But then the question is what would Trump do, you know, after that. (laughing) We’ll never know, of course. But, anyway, I tell you, they’re firing at me all angles here, Snerdley. They’re finding their way through here, and you are putting them through to me here. Don’t think that I do not know what’s going on here.

RUSH: Okay, let’s keep this rolling here. Pat Buchanan has a piece today: “Republican Elites Call For Purge of Trump.” Let me read to you some excerpts. “In the Cleveland debate, Donald Trump refused to commit to support whomever the Republican Party nominates in 2016.” Pat Buchanan says, “Trump would be wise to maintain his freedom of action,” keep his options open, because Pat Buchanan says, “For there is a plot afoot in the Washington Post Conservative Club to purge Trump from the Republican Party before the primaries begin. ‘A political party has a right to … secure its borders,’ asserts the PostÂ’s George Will, ‘a duty to exclude interlopers.'” Buchanan writes that George “Will wants The Donald ‘excommunicated’ and locked out of all GOP debates until he kneels and takes a loyalty oath to the nominee. ‘Marginalizing Trump’ carries no risk of ‘alienating a substantial Republican cohort,’ [George] Will assures us, for these ‘Trumpites’ are neither Republicans nor conservatives.” Buchanan writes that according to the Washington Post conservative group, the Republican Party’s “better off” without Trump supporters. I’m just telling you what Buchanan says here. He’s quoting George Will as saying that it’s possible to marginalize Trump because the Trump supporters are not Republicans and they’re not conservatives so it’s not gonna be any big loss. 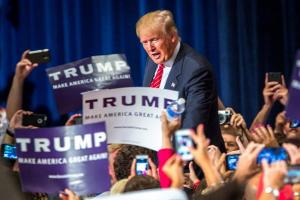 Then he goes to Michael Gerson, who’s a former speechwriter for George W. Bush, now a columnist at the Washington Post. Buchanan that says “Gerson says ‘establishment Republicans’ must ‘make clear that [Trump] has moved beyond the boundaries of serious and civil discourse.'” Buchanan writes that Michael Gerson dislikes “the Trumpites as much as [George] Will.” Buchanan says, “Trump’s followers are ‘xenophobic,’ Gerson tells CNN.

“They have a ‘resentment of outsiders, of Mexico, of China, and immigrants. That’s more like a European right-wing party, a UKIP or a National Front in France. Republicans can’t incorporate that'” kind of thinking. That’s what Buchanan says Gerson says. Back to Buchanan: “But if the GOP has no room for TrumpÂ’s followers, it has no future. For there simply arenÂ’t that many chamber-of-commerce and country-club Republicans.”

So Buchanan is saying here that these Republican elites had better be careful because the people they want to win with simply do not exist in nearly enough numbers to secure them victory. There aren’t enough Republicans that are members of country clubs, and there aren’t enough Republicans who are members of the Chamber of Commerce to overwhelm all the votes that all the Democrats are gonna get.

Buchanan says that “Gerson mentions with disgust the UK Independence Party and France’s National Front. What do those parties have in common? Both are anti-New World Order,” says Buchanan, “Both” those parties, UK Independence Party and France’s National Front, “arose to recapture the lost independence and sovereignty of their nations from the nameless, faceless bureaucrats of Brussels, those EU hacks who now dictate the kinds of laws and societies the Brits and French are permitted to have. 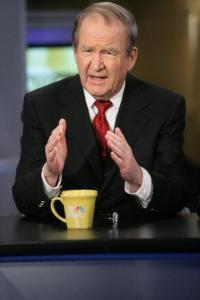 “What motivates these folks is not all that different from what brought the farmers to Lexington Green and Concord Bridge and inspired colonists to stand by the original Tea Party boys in Boston.” Buchanan says, “New parties arise and outsiders are drawn into politics to fill voids and vacuums created by the failure of incumbent parties and politicians. Case in point,” Buchanan says, is “GersonÂ’s boss George W. Bush. With the country united behind him after 9/11, Bush called for war on an ‘axis of evil’ — Iraq, Iran and North Korea — that had nothing to do with 9/11.

“He then persuaded Congress to authorize an invasion of Iraq to strip it of weapons of mass destruction it did not have. Cost: 4,500 American dead, 35,000 wounded warriors, $1 trillion dollars sunk, 100,000 dead Iraqis, half a million widows and orphans, a country ravaged and a Mideast now awash in war and bloodshed. Political result,” says Buchanan: “The Republicans lost both houses of Congress in 2006, and the White House in 2008 to an anti-war Democratic senator whose voting record was identical to that of Bernie Sanders.

“Yet…” This is all Buchanan now. “Yet the leading establishment candidate of the Republican Party elites, in national polls and cash raised, is Jeb Bush, who took five days to concede the war his brother started may have been a mistake. … Our Beltway elites are demanding that Trump apologize for his remarks about women. But when have they apologized for having inflicted this disaster upon our nation and the Middle East?

“Thursday, the Census Bureau revealed that a record 42.1 million immigrants, here legally and illegally, are in the US, a population explosion being driven by Mexicans still flooding across the border. Is it ‘xenophobic,'” Buchanan asks, “to ask if Americans approve of this historic change in the composition and character of the country they love? Is it outrageous to ask whether there is a correlation between this massive infusion of unskilled and semi-skilled labor from the Third World, and the stagnant and falling wages of native-born Americans?”

Anyway, skipping forward to the end here, Buchanan says, “Trump should tell the GOP, in the neoconsÂ’ favorite phrase, ‘All options are on the table.’ And that includes the Samson Option. Trump should tell the GOP that if it disrespects him and his followers, then he is prepared to do as did the biblical hero Samson, when, blinded and mocked by the Philistines, he pushed the pillars apart and brought the temple down upon the heads of them all.”

Okay. That’s Buchanan advising Trump to stay in, and if he has to, to destroy the Republican Party in the process, those Philistines them. Right.

RUSH: Baton Rouge, Paul. We got less than a minute but I wanted to get to a because you held on for so long. Hi.

CALLER: Hi. How you doing?

CALLER: The reason I’m calling is ’cause I want to get your opinion on a possible scenario that could pay out regarding Trump candidacy.

CALLER: To me, something just doesn’t seem right with Trump running as Republican given his affiliations with past Democrat candidates. Before I get to the theory, I want to get to the reasoning behind it. First off, everything dealing with the Democratic Party seems to have some kind of deflect-and-distract strategy behind it. And I think the Democrats realize that Hillary can’t be elected, with all these scandals hitting her. Obama’s Justice Department is just now beginning to go hard-core after her regarding the server issue, something that should have happened a long time, and I think they want to get rid of her.

CALLER: Well, we have Trump out there.

RUSH: You know, that’s a toss-up. Jeb Bush or Trump? What do you do? That’s a good point.