It Just Keeps Getting Worse for Hillary

RUSH: On the Hillary side, as good as things are for Trump, they’re just as bad for Hillary. Ron Fournier admitted... He said: Six months ago I was ready to give up journalism to go work for Hillary Clinton and the Clintons, and today I’m not even sure I could vote for her. 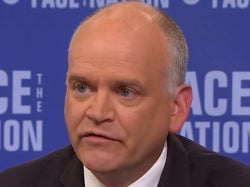 What are they up to now, 60 classified e-mail? Here’s ABC News. By the way, ABC News is reporting that there was a backup server. (interruption) Well, of course there was a backup server! Not only was there a backup server, there are people to whom she e-mailed back and forth who also have hard drives and servers where many of those e-mails probably still reside. Here is… I was talking to friend of mine in Hawaii yesterday afternoon who calls Hillary “Hildebeast.”

He raised an interesting question to me. “How do we know that Hillary is the only administration official with a private at-home e-mail server? Didn’t we found out… Wasn’t Lois Lerner doing something with a home e-mail account or some such thing?” Even if she wasn’t, the point is it’s a good question. Why are we stopping at Hillary? Could it be that there are other people in this Regime who’ve been doing exactly what Hillary did?

Could there be more people involved there? Could there be all kinds of reasons why Hillary’s e-mails have been scrubbed, the server’s been scrubbed? People are trying to hide those e-mails or hide whatever happened here to keep it from being discovered. Could it be that Obama has his own server? I have no evidence. Could it be that Valerie Jarrett has one? Who says it’s…? (interruption)

Well, we do know Lisa Jackson was… (interruption) That’s right. Lisa Jackson and I think Lois Lerner, too. But Lisa Jackson is doing private e-mail with the EPA, Environmental Protection Agency. So who says that it stops with Hillary with this stuff? And the reason this is a relevant question is because of security. The ChiComs have hacked pretty much everything. You have to think they’ve hacked Hillary’s database.

RUSH: To Hillary Clinton, because we’ve gotta start on this stuff. There’s still a lot of Trump stuff left here. Not a lot. Still some stuff. An interesting sound bite. John Harbaugh, the coach of the Baltimore Ravens, came out for Trump in a way, by endorsing Trump’s immigration plan. By the way, Chuck Todd, F. Chuck Todd. On Meet the Press yesterday, F. Chuck went to Iowa.

He went to the Iowa State Fair, which is where all the candidates were last week and over the weekend. And Chuck Todd admitted that he was stunned at how easy it was to find Democrats willing to criticize Hillary Clinton over her e-mail scandal. Here’s the audio sound bite. Chuck Todd is stunned at how openly Democrats are criticizing Mrs. Clinton.

TODD: I was stunned at how (pause) many… how easily [sic] it was to find these Democrats willing to say these things. That was on camera. Molly Ball in this morning’s Washington Post, blind-quote central from Democratic hand-wringers: “A lot of people who were hired by the campaign were new to the Clintons. I kind of assumed it would be different but it hasn’t changed.” Another strategist: “I don’t think there’s a big smoking gun, but it’s hard to explain why you had a private server; why you just now turned it over. Shouldn’t you have had better judgment?”

RUSH: Now, that didn’t sound like Chuck Todd to me. Maybe it’s my cochlear implant. Did sound like Chuck Todd to you? Did it? It sounded like Mark Halperin to me. But it was Chuck. You know why Chuck is surprised? NBC hasn’t reported it! You know, these people in the Drive-By Media have not talked about this e-mail server. They maybe have spent seconds on it, aggregate, maybe minutes. But they haven’t dug deep into this at all. They’ve buried the story! 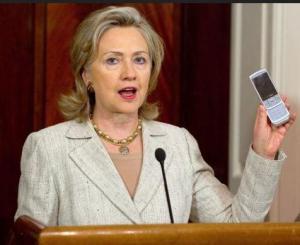 And it’s really kind of striking because it’s their business to at least have the pulse of the people. Whether they disdain it or not, they at least have always known what it is. They have become so contemptuous of non-elites that they’re not even endeavoring to understand what’s going on out there. So in a sense, they sit there inside their studios, inside the Beltway and in the New York-Washington Corridor, and they report the news.

If they leave out the Hillary e-mail scandal, then when they get a visa and they go to Iowa and they find out that they can easily people find it to criticize that? “Well, what’s this! We’re not even talking about that. How do these people know?” And then after that realization, then the fact that they’re Democrats willing to criticize Hillary? They can’t believe it! Because they’re not criticizing Hillary. How easily they seem to have forgotten 2008. We are up now, by the way, ladies and gentlemen…

Let me check the latest number. It’s 305 e-mails classified as secret one way or another. Washington Times: “While media coverage has focused on a half-dozen of Hillary Rodham ClintonÂ’s personal emails containing sensitive intelligence, the total number of her private emails identified by an ongoing State Department review as having contained classified data has ballooned to 305,” and counting. I’m going to ask this question again: Is Hillary the only member of this administration to have had a private, at-home server?

Everybody’s acting like she’s the only one. Now, we know that Lisa Jackson did. I think Lois Lerner was doing some magic from home. But I’m just genuinely curious here. The obvious efforts that existed to cover this up and to ignore it and to say, “There’s nothing there,” I originally thought the reason for that was… I mean, there was even reticence in Congress, the Republican-run Congress.

There was slow motion getting into Benghazi, slow motion getting into this. I said, “Maybe there’s something about them on these e-mails. I mean, who knows what she’s collected here? Maybe there’s something about Obama, something on this server she’s got that a whole lot of people in Washington don’t want anybody to get wind of. Maybe what she’s done is gonna impact a lot of people. That is the Clinton MO.”

So I just look at her polling numbers. She continues to lose ground to Bernie Sanders in New Hampshire. Chris Stirewalt at Fox News: “Hillary Outrunning Her Own Privilege — Can Hillary Clinton be this bad at running for president and still get away with it? For now, the answer would appear to be yes.

“But we are starting to see her reaching the tether of the privileges associated with being a presidentÂ’s wife, her partyÂ’s 2008 runner-up and the beneficiary $2 billion campaign apparatus. ItÂ’s still her turn on the Democratic side, but an awful lot of Democrats are coming to wish there was another way. The latest Fox News poll –” that shows Trump up at 25% “– shows Clinton losing 10 points of her lead since last month on Vermont socialist Sen. Bernie Sanders.”

Chris Cillizza in the Washington Post: “ItÂ’s Too Late for Democrats to Start Rethinking ClintonÂ’s 2016 Viability. Dear Democrats: ItÂ’s too late to start over. As in, thereÂ’s no replacing Hillary Rodham Clinton as your partyÂ’s front-runner for the presidential nomination.” Not with Biden,even if he runs. Not with Algore. “(I mean, come on.) Not with your ideal rich-person-with-no-record-and-a-fresh-faced-appeal,” like Tom Steyer, the environmentalist wacko from California.

What that means is, he should have been toast by now two or three times. And Cillizza goes on to recount on why Biden doesn’t have a prayer, why Gore is not even in the picture, and no fresh face never heard of or seen before Democrat from California has a chance.

“The idea of a late entrant reshaping the race — and unseating Clinton — might make sense to doubting Democrats. But the nature of the modern presidential contest makes it more fantasy than reality. Democrats threw their lots in with Clinton more than a year ago. Now they just have to try to ride it out. They donÂ’t have any choice. Not really.”

ROBINSON: It’s hard to claim this is all just a partisan witch hunt when the Justice Department under a Democratic administration is looking into the whole e-mail mess, so that doesn’t ring so true. Not gonna have an impact on people the way she wants it to, and clearly a lot of Democrats are worried. 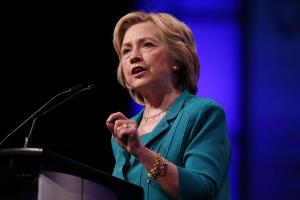 RUSH: Jeff Greenfield on the Meet the Press roundtable.

GREENFIELD: It’s the tin-ear quality of so much of what the Clinton — Mrs. Clinton has exhibited this campaign, the 2008 campaign, the distinction between her and her husband is monumental in terms of a natural ability to deal with this.

RUSH: Right. Did you see the pictures of Bill playing golf with Obama? There’s a picture here, the Drudge Report home page, Clinton and Obama playing golf, and it sure looks — this is a still shot, and, you know, they could be talking about how Clinton’s ball wasn’t out of bounds (imitating Clinton), “You idiot, it’s right there. It’s right on the line. I didn’t hit it out of bounds, screw you.” But it looks like Clinton is warning Obama and telling him off. He’s waving his arm around there, got a plaintive look on his face.

But a lot of people are wondering, “Okay, what was this about? These two guys go out and play golf, and Clinton’s wife is under investigation by Obama’s DOJ.” So who knows what about who? Who has the leverage in that meeting? Who can threaten who the most? What kind of conversation was that? And of course was it about Hillary, and was Obama making threats? Was Clinton making threats? Did any of this come up? It’s speculation at this point.

William Jacobson, Legal Insurrection, confirms here that ABC News reports there may be a backup server, that Hillary Clinton may have had — and that is an ABC News report, that Hillary had a backup server. And if that’s true — ’cause, look, she doesn’t know any of this stuff, but she hired professionals to put this together for her. And, folks, we, as you know, on this program, routinely talk about and advise everybody to back up everything on your computer because you can lose it in a moment’s notice.

Well, don’t think for a minute that whoever was running Hillary’s server didn’t also know that. It’s de rigueur, if you will, in high-tech. You back up everything multiple times. Nothing languishes on its own out there. The idea that there’s a backup server, meaning if there’s a backup server it’s somewhere and it hasn’t been wiped. By backup server I don’t mean other servers in a RAID array in the same shell. I’m talking about a separate server, separate drives, maybe off site, backed up with every bit of data on it.

And if that’s true this e-mail scandal could still be picking up steam. We’ll just have to wait and see. She’s by no means in the clear on this despite the efforts of some in the media to make it look like she is. There’s always Democrat public opinion about this. You cannot erase or take away what Bernie Sanders is doing out there, whether he’s gonna end up being the nominee or not it sends a message of discontent that there still is with Hillary.