RUSH: This is Ashley, Kansas City, Missouri. You’re next on the Rush Limbaugh program. Hi.

RUSH: I’m great. Thank you. How you doing?

CALLER: I’m doing well. First off, I just want to say, I love you to death and I thank God for you every day. I’ve been a Rush Baby since 2003, and I just wanted to know: What do you think of Donald Trump? I’m 19. It’s my first election, and in 2012 I worked for Romney. I was disappointed that he did not win. So, what do you just think of Trump?

CALLER: I was supporting him, but after I heard his election and his debate, I felt like he shot himself in the foot. What do you think of him?

RUSH: Well, there are many answers to this. Now, I know Donald personally. I’ve played golf with him. He’s just a flat-out nice guy, and he is who he is. If you play golf with him at his golf course, the whole time you hear how it’s the greatest golf course ever, that there isn’t anything even close. When he hits a great shot, he’ll tell you that nobody plays the game better than he does. It’s who he is, and you laugh yourself silly.

He was a 6 handicap and he played to, and he was booming the ball off the tee. He holed out from 120 yards after saying he was going to. He’s a funny person. I think the reason people are attracted to him right now is that he’s real. He isn’t phony. He’s not politically correct, and he’s fearless. He’s not afraid to tell people what he actually thinks about other people or things, and he’s not worried about the reaction that people have to it.

He’s just gonna go ahead and be who he is. He’s one of these people that really… He embodies the idea that you attract the kind of people you are, and that you should not be a phony to try to attract certain people, to try to be like the people you want to attract. It never works. He just is who he is, and whoever doesn’t like him? That’s their problem. Whoever does, fine. They’re in the inner circle. He’s not bothered by not being liked. He doesn’t worry about it. He doesn’t get his nose out of joint. 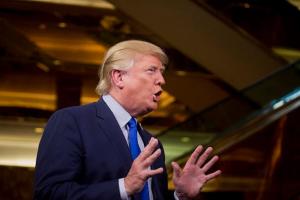 Unlike Bill Clinton. If he goes into a room with a hundred people and there’s one of them who doesn’t like him, that’s the whole time he spends with that person is trying to convert ’em. Trump doesn’t care, at least outwardly. He doesn’t seem to have these normal, everyday insecurities. In an era of the chickification and the feminization of the male population, Trump’s a man. He’s unafraid to be masculine. I think that has a lot of people, including women, standing up and cheering.

I think Trump’s support goes beyond ideological boundaries or lines and so forth. But more than that, I think the Trump candidacy has… I don’t know if it’s gonna work, but it has a great opportunity to totally blow political correctness sky-high. Trump is showing that you can thrive and win — survive, be loved, be supported — by being “politically incorrect,” quote/unquote. Trump is showing that the things the Republican Party’s afraid of are baseless.

There’s too much to happen that can change things. No way we can know. I don’t have a candidate yet. I have respect for a lot of these people. I have like for a whole lot of them. We’ve got some incredible people on our side seeking the office here, and they’re all decent, just plain old decent, great human beings. Ben Carson, Ted Cruz, Carly Fiorina is obviously solid citizen, reliable person. Marco Rubio, you won’t find a better person. These people, you’d all love to go to dinner with them, hang out, watch a football game, baseball, whatever. They’re all just great quality people, and I don’t have distrust, I don’t have suspicions of ulterior motives with any of them.