RUSH: So we have another cheating scandal already alleged with the New England Patriots. I’m just going to tell you something: For the Steelers to do this… This is so, so, so out of character for the Pittsburgh Steelers. The tradition of the Steelers and their stature, if you will… There are tiers of stature in the NFL, just like any organization. Steelers are in the top tier in terms of league-wide respect, respectability, maturity, this kind of things. I mean, talk about ownership and all the way down to the executive management level. 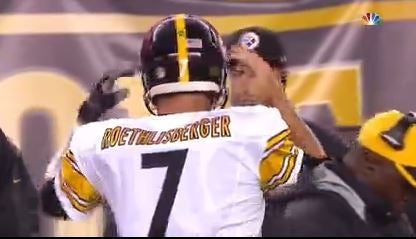 And last night, during the first half or the first quarter… By the way, I just want to tell you: The latest is that the Steelers’ coaches headphones were not working. Now, I knew something was up right before kickoff. NBC had a camera on the Steelers sideline, and Roethlisberger had his helmet on pointing at it, frowning, saying he couldn’t hear. He took his helmet off and walked over, out of the picture, somewhere on the bench, obviously, where the communications system is dealt with.

He came back into the picture and he had his helmet on and he’s giving a thumbs-up, like he all of a sudden could hear. It’s right before the game, and I knew. I just… Now, I didn’t know that it was this, but I knew the Steelers were having trouble with their headphones, the communication system. They’re allowed to radio into the quarterback for a certain number of seconds between plays, whatever they want. It could be the next play — which is usually what it is — and they test this frequently and constantly during pre-game and so forth.

The Steelers’ was not working. So apparently what was happening is that the Steelers coaches’ headphone system was receiving the Patriots’ radio play-by-play broadcast. And the Steelers’ coaches were unable to communicate with each other, and they were unable to communicate with Roethlisberger. When he was on the field, they were unable to send in play calls. So they called an NFL official from the press box to come down and look at it, because the phone system is the NFL’s responsibility during a game. It’s not the home team’s responsibility.

So here is the snafu. What happened is some guy from the NFL comes down, looks at the situation, and supposedly gets it rectified. But it wasn’t rectified, because the Patriots claimed that they were having the same kind of problems in their headsets. And it was learned — it was discovered later… And this must be… For the Steelers to do what they’ve done here, to make this an official case on their website, they must believe this actually happened. When the NFL guy went over to the…

This is the witness testimony provided by Steelers players. When the NFL guy walked over to the Patriots side line to check out the phone system there, everything was working fine. When he leaves, the Patriots sideline, once again the Patriots play-by-play radio broadcast shows up in the Steelers’ coaches’ headsets. And so the meaning of that is that even though it’s a league-controlled part of the game — coaches’ headsets on both sidelines — that the Patriots had found a way to monkey with it.

And the Steelers on their website have posted… Not only to go with head coach Mike Tomlin’s comments post-game, they have posted thoughts on what happened last night, which is essentially an official allegation that there was purposeful tampering with the Steelers’ headsets last night. Now, the Steelers organization would be… Correct me if I’m wrong about this, those of you who cover the team regularly. The Steelers organization would be one of the last to even involve themselves with something like this, at least publicly.

If they were going to deal with something like this they’d do it privately behind the scenes, not make a spectacle of it. I think what this shows… Everyone’s’ trying to figure out, “Why was the NFL, why was the commissioner, Goodell, so insistent on this Deflategate thing with Brady? Why did they throw everything and the kitchen sink at this?” And I’m telling you: It’s because of the lingering belief on the part of many owners for many years that all is not on the up-and-up with the Patriots.

They haven’t been able to catch ’em conclusively with proof, so whatever this is, the closest opportunity that we had to nail the Patriots for all the past transgressions (including Spygate), and it petered out, didn’t go anywhere. And for this to happen… You know, I was watching the game last night. I said to Kathryn, “You know what I’d love to see? I’d love to see the game stopped, and the Steelers demand that the balls be measured.” You know, right in the middle of the first quarter. I’d love to see this! (laughing)

The only way to look at this stuff is to laugh at it. And they went and talked to Belichick. He said, “We’re on to Buffalo. I don’t know anything about technology. Ours weren’t working part of the time, either. It’s no big deal.” So, anyway, it’s not going away, and I’m just… I could be wrong. People closer to the team than I am will maybe correct me on this, but I think for the Steelers from the top, not just the head coach — I mean, this stuff doesn’t happen on their website without ownership approving of it — there’s got to be league-wide anger, disgust, whatever, with the Patriots on a whole bunch of levels.

So now we’ve got, what are they calling it? Headset Gate? Headphone Gate? Anyway, I knew. I just wanted to tell you: I knew. When Roethlisberger was having trouble with his helmet in the pregame, and they were talking about something totally unrelated to this. It’s just my highly trained eye. I’m so observant. That’s what happens when you’re the mayor of Realville. You notice everything, and you hear everything — well, as much as I can hear. What I do hear, I hear everything, including between the lines. And I see everything beyond what is visible. And I can tell you: On the sideline pregame, Steelers were having trouble with their communications. Slam dunk.

So when I read about this this morning getting up, heard a little bit about it last night, I was not surprised.