RUSH: I got Trump. (laughing) I just saw on CNN, funniest thing. I tried to get my phone out to take a quick picture of it, but it was a graphic, and the graphic was gone by the time I got the phone out. I got the idea to take a picture of it too late. It was a list of potential pitfalls awaiting Trump, and then they had one for every candidate. And the list of potential pitfalls for Trump was absurd! (laughing)

It was everything that’s already happened that should have done him in. And here’s CNN with a little graphic saying (paraphrased): “Any of these things happen could derail the Trump candidacy! Everybody’s on the lookout here making sure they don’t make drastic mistakes here that would derail their own campaign.” And there are four things, like Trump could say something wrong about something.

He get testy with a female interviewer or whatever. It was just silly stuff. It was classic. I mean, you had classic formulaic political inside-the-Beltway media pre-analysis that totally missed the real substance of this Republican campaign. It was stark. I wish I’d have had my camera out and gotten a picture of it so I could actually read the four points. The pitfalls for Trump.

RUSH: So I had to work late last night. I parked in the garage; I walked into the kitchen. Kathryn got home before I did. I walked in, and she’s laughing herself silly. The TV’s on; the dogs are going crazy. I look, it’s Trump up there. 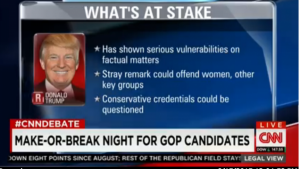 RUSH: So Koko came through. Koko grabbed a screenshot of what I was just talking about that I saw on CNN.

They’re running these little graphics on each candidate as they promote the debate tomorrow night. And it’s called, “What’s at stake,” and they list three or four vulnerabilities or potential pitfalls that could ruin each candidate. And when I saw what they had up there for Trump, I just stared. I was in total mesmerized disbelief that they could be this obtuse, to be this far away from understanding what’s happening in this Republican campaign.

Oh, speaking of which, have you people heard the latest from the intelligentsia in the Republican side — actually from some of the Democrats, too — to try to caution everybody away from Trump? Have you heard this? Here’s what it is: “This is really, really bad. This looks really, really dangerous. You know why? Because we’ve seen this before. We saw this exact thing back in 2008, a bunch of mind-numbed, totally Svengalied people cheering and yelling and supporting Barack Obama and not having the slightest idea why.

So now so goes the theorizing inside the Beltway.

“It’s happening all over again, except this time it’s on the Republican side, and the culprit is Donald J. Trump! Donald J. Trump has cast a spell over otherwise well-intentioned and good people who are so fed up and so angry and so marginalized and feel so left out that they are willing to support what may end up destroying the country just to get even with what happened to them eight years ago.” Have you heard that, Dawn? Have you heard that being…? Well, if you haven’t, hang in there, because it’s robust.

It is the latest technique being used to try to shame Trump supporters into what the establishment says is, “Wake up! Don’t you people realize you’re being had? This guy is a phony,” meaning Trump. “This guy using you. This guy, he’s not saying anything, and you’re thinking he’s saying everything. He’s saying nothing, so you can make him be saying whatever you want to hear. Whatever you want him to say, he’s saying it, even while he says nothing.

“He’s not saying anything, and you’re out there cheering it! It’s like you’re showing up at a stand-up comic routine. You gotta snap out of it. The same thing is happening now that happened in 2008, and it’s not good for America.” That’s how it goes. So how many of you who either have been to a Tramp rally or watched last night from Dallas from American Airlines Arena… In fact, people have gone so far say the last time something like that happened in Dallas, Obama did it at the old Reunion Arena. Now it’s American Airlines Arena. 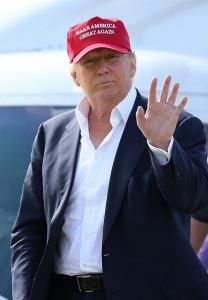 Anyway, here’s the screen grab, CNN. This what I tried to get a picture of. I got my camera out too late. “What’s at stake.” They’ve got a picture of a smiling Trump here on the left. The headline… Well, it’s not the headline. Well, the headline is, “What’s at stake,” and the graphic here at the bottom is “make-or-break night for GOP candidates.” And then the CNN bug in lower right-hand corner. “What’s at stake for Donald Trump?” Here are the three things. You ready? (laughing)

“Has shown serious vulnerabilities on factual matters.” (laughing) Really? “Stray remark could offend women, other key groups.” (laughing) Really? How many do you expect? “Conservative credentials could be questioned.” (Laughing) So this is what CNN puts up. You know, this is like NFL pregame shows. You know how those things are in football. Even baseball does this, too. At the beginning of the game they sell a little screenshot like this.

“The three keys to the game!” “Phil Simms’ three keys to the game!” They’re things like, “Get off to a good start, don’t let the other team score, and make sure you score more than the other team.” That is considered unique Phil Simms insight. And they do it for everybody, except Collinsworth. NBC doesn’t do it because they don’t delve into that, but they do it as a means of selling advertising.

There’s no advertising on this, that I can see, but it’s that inane. “Don’t let the other team score. Get off to a fast start. Control the line of scrimmage.” It’s something both teams are trying to do the whole game. There’s nothing special. There’s nothing insightful about it. So this is meaningless. Donald Trump “has shown serious vulnerabilities on factual matter.” Has any of it mattered yet? Why is it all of a sudden gonna matter on the CNN debate?

“Stray remark could offend women, other key groups.” That’s happened, too, and is there any sign there’s any damage from it? Well, what does CNN think is gonna happen if he does it again tomorrow night? Is it gonna be…? I mean, “what’s at stake”? “Make-or-break night for GOP”? This is make-or-break stuff for Trump? This is nowhere near what make-or-break for Trump is!

I’ll bet you and I together could come up with three different things make-or-break for Trump that are actually close to accurate that have nothing to do with these three things. “Conservative credentials could be questioned”? It’s not even about conservative credentials at this point. I mean, let’s take, “Has shown serious vulnerabilities on factual matters.” Okay, so he says something that’s factually incorrect. Who is going to care among his supporters? Nobody.