RUSH: Here’s Charles in Columbus, Ohio. Hey, Charles. Welcome back. Great to have you on EIB Network. Hello.

CALLER: How are you doing, sir? Nice to talk with you.

CALLER: Longtime listener and a big fan, first-time caller. I’ve got a question in regards to Rubio. I don’t understand why nobody is asking him this question. Hopefully you can help me with it. Rubio, during the immigration debate years ago — a couple years ago, whenever was that — he told the American public one thing, and then he goes to Spanish-speaking TV and says the exact opposite, basically lying to the American public. Why does nobody ask Rubio about that? I don’t understand.

RUSH: I didn’t know he had done that. He did address last night his early involvement with the Gang of Eight plan that he had tried to go about it a certain way and learned that he couldn’t, and now he’s on to a different way. I didn’t… This the first I’ve heard that he had gone on Spanish-language media and told a completely different story.

RUSH: If I’ve heard that, I may have forgotten it, but it doesn’t ring a bell.

CALLER: Yes, sir. He sure did. He told the American public one thing. He said, “They must build a fence. There will be no mandatory (sic) way for people to get into America.” Then he gets into the Spanish-speaking television, I think it was Telemundo. I’m not positive about that, but Spanish-speaking television. He did interview there, and he said the exact opposite. I mean, last night he said during the debate that he speaks Spanish at these things so he can make sure that what’s being said to the listeners in Spanish is what he wants to say and not at what the interpreters are saying, okay? But does he not think that people don’t know what he has said to them, that he can lie to the American public?

RUSH: I don’t know. Look at where he is in the polls. Maybe they do. Who do you support in this thing? 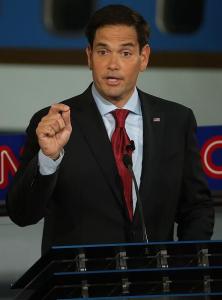 CALLER: I’m kind of torn between them. I like Ben Carson, I like what he has to say. I do kind of like — I don’t know — Farina (sic) or whatever her name is. But I just don’t know. Right now if I have to say anything it would be Dr. Carson.

RUSH: Well, look, I don’t know about last night, but Rubio has been creamed for his dual stance on immigration, been creamed. Now, I don’t know about Spanish language, but he’s been creamed for being part of the Gang of Eight, and he’s still trying to explain that to people. It’s not that he has gotten a pass on that. Believe me, he hasn’t. You know, it’s clear. It’s clear as a bell what happened on that. He’s new, he’s young, he’s Hispanic, and they went after him.

They said, “This is a guy, if we get him on our team, who could help sell this ’cause he’s a conservative; he’s got credibility,” and I think he got roped into something and he didn’t understand it ’til it was too late, and then bumped out of it. That’s my best analysis here. But The Daily Caller… No, you’re right. The Daily Caller in April of this year, said that in a Spanish interview Marco Rubio said, “It’s important not to cancel Obama’s executive amnesty.” I did not know that. You have alerted me to something I did not know that happened, but I do know that he’s taken heat for being part of the Gang of Eight, and he tried to address it last night.

But you may be able to answer your question by looking at the standings here. Marco, he got some great reviews last night. But it’s like anything else, Charles: If he starts climbing the polls, somebody’s gonna ask him that at some point. It’s still early. It’s not like the election’s tomorrow and somebody’s blown an opportunity. Everybody needs to chill here! Whoever you hate, somebody’s gonna go after ’em. You can be confident of that. (laughing) It will. Last night, CNN obviously wanted to pit Trump against Jeb, and then Carly Fiorina kind of screwed that plan up. But CNN went with it, ’cause it still fit the bill.