RUSH: First I want to start with a See, I Told You So. I want to preface this by reminding you of something that I have said recently in an intense way, and I’ve said it over the years off and on, but very consistently. And it is that this whole business of the Republican Party and/or conservatives needing to shut up about social issues is a trap. That we’re not the ones that bring it up. We’re not the ones that are responsible for it. We are reacting when we discuss social issues.

The left is destroying this culture. The left and its march on this country is destroying moral foundations that have existed since the founding of the country. And if we don’t respond to it, we just sit by and let it happen. So we respond to it, and everybody says, “You gotta stop talking about with the social issues. The Republicans are never gonna win if you keep talking about the social issues.”

I tell you this, even to this day, a lot of people I play golf with, after a couple of beers, two or three holes, invariably one of them will come up and say “Do you ever get tired of talking about the same stuff? Can’t you just let this abortion crap go? You know, social issues, if you keep it up you’re gonna be the reason we keep losing. Nobody cares. The social issues are killing the Republican Party.”

And I’ve told you the story, I’m not gonna repeat it, all the way back to the early nineties some guy comes up to me at a party in the Hamptons and starts jabbing me in the chest with his index finger, saying, “What are you gonna do about the Christians?”

“What are you talking about? Abortion, it’s killing us. We don’t even want to go to the convention with them.” It was in San Diego that year I think. Anyway, you know the drill. And I have not been taken off my game or intentions about this because I don’t think that the social issues are something that harm. I think ignoring them harms. The social issues, that appearing in quotes, it is the left. Look at what’s happening with marriage. You take any number of issues, the only reason they are issues is because the left is assaulting traditional values and institutions.

So those of us who cherish those, stand up and defend them, all of a sudden we’re to blame? All of a sudden it’s our fault for talking about the social issues? And what it invariably always comes back to, what all of that really means is, “Would you stop talking –” and it’s not aimed at just me, by the way. “Would you stop talking about abortion, it’s just killing us. Never gonna change it. We’re losing the women vote. We’re losing the Millennials. We’re losing the kids. This old-fashioned fuddy-duddy kind of stuff, just forget it, don’t talk about it. We can’t win, never gonna win.” They think that because of ongoing media tricks and tricks by the Democrat Party.

It’s no different trying to tell the Republicans to stop talking about social issues is the same modus operandi, the same trick as trying to convince Republicans they can’t win the White House unless they agree with Democrats on amnesty. If you look at Carly Fiorina, I will give you just an example of this, Carly Fiorina, one of her most eloquent moments in the debate was describing the Planned Parenthood videos and the challenge that she made to Hillary Clinton and any other Democrat who cares to actually look at the videos. That is the one thing that the establishment Republicans want to forget that she said.

How does that manifest itself? It manifests itself with the Republican consultancy class telling candidates, “Hey, I’m the guy to get you elected, and you know how? I’m the guy that can get you the independent vote,” and what does that mean? It means they run a campaign aimed at 20% of the voters, not 100% or not 60%. You assume your base is gonna show up. There are all of these tricks, and there are tricks employed with the power of the media.

And if you don’t think that’s power, even today there are stories the Republicans in the Senate no way no how, no fight. They’re not even gonna bat an eyelash. They’re not gonna raise an eyebrow fighting Planned Parenthood funding. Know why? ‘Cause that might mean a government shutdown. And I don’t care what else happens, Mitch McConnell and the boys are saying, “We’re not gonna shut down the government!

“The Democrats can do anything they want, because we’re not gonna shut down the government by standing up for anything we believe in, because shutting down the government is a guaranteed negative. We lose every time it happens.” Another great Democrat trick. So what it all adds up to is the Republican establishment, if they’re genuinely an opposition party — and jury is still out on that.

But assuming that they are, they’ve fallen for every one of these tricks, the end result of which is the Republican Party stays silent about what it really believes, under the belief that voicing what they really believe will turn off so many voters that they can’t possibly win. So they shut up. They don’t try to stop Obama, they don’t try to stop the Democrats, and they lose. But at least the government doesn’t get shut down. And they’re really, really happy about that. So here’s a story.

“Hey, Rush, we’ve heard it all before. What are you talking about?”

Well, I have here my formerly nicotine-stained fingers (shuffling paper) Breitbart.com. Headline: “Social Issues Surge in Importance to Voters — Establishment elites repeat in an echo chamber that voters don’t care about social issues or, alternatively, that voters favor liberal positions on these issues, so either way, Republicans should avoid them. But Republican candidates are ignoring this coastal-elite groupthink by tackling these issues, and polls show that voters do in fact deeply care about what kind of culture we live in.” 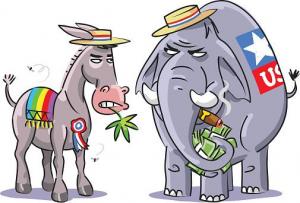 I know what some of you are saying, “Come on, Rush! I’ll bet it’s a poll we’ve never heard of. You found some obscure poll just to make your case.” Breitbart: “On the eve of its Sept. 16 GOP presidential debate, CNN released a poll comparing votersÂ’ attitudes on social issues today to where they were in June of 2011. The result? Voters are far more concerned about those issues now than they were four years ago.” What has happened in these last four years?

“And on illegal aliens in this country, while 29% thought the issue was extremely important in 2011, that number has now jumped to 39%.” These numbers are up dramatically. I know people say (grumbling), “Hey, Rush, that’s still beneath 50%.” That’s not the point. That’s not what this is measuring. They’re not measuring majority/minority. They’re measuring trends. The poll is measuring trends, societal, cultural thinking. Talking about social issues is not hurting, is the point!