Our Freedom Threatens the World’s Tyrants

RUSH: We move on to Alan in Denville, New Jersey. Welcome, sir, to the EIB Network. Hello.

CALLER: In any case, this is when you were making the comment before about why the world isn’t looking to the US as a model and trying to reproduce it, rather seems everyone wants to tear it down, I called up, I told, Mr. Snerdley, in fact, I was more nervous speaking to him than you. But I told him that, you know, there’s two things, they’re very similar, but it’s a big difference. I think it points to the root of the problem we have in this culture and around the world. There’s envy and there’s a begrudgingness. Envy is something that can be a positive because I can be envious or you can be envious of someone’s possessions and use that as a positive to try to strive to achieve whatever you need to, to get those possessions in terms of a job, education, whatever it is. 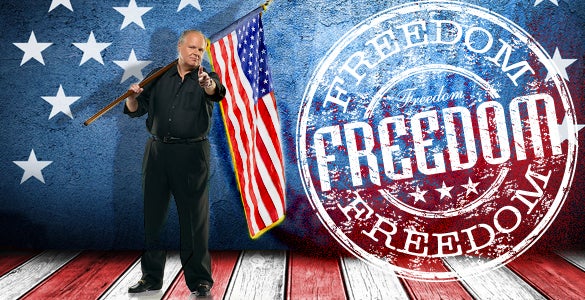 RUSH: Right. You could be envious of Mr. Snerdley’s job and that’s why you would get so nervous talking to him when you called.

CALLER: Right. (laughing) Right. And neighbors can be envious of what the other person has yet still be happy for what they have —

CALLER: — and the relationship will endure. However the problem we have is a begrudgingness. People see what other people have and they don’t want them to have it. And if neighbors have a begrudging feeling towards their friends’ possessions, eventually it’s gonna eat away and destroy the relationship and they’re gonna look at ways to try to take away what their friends have —

CALLER: Right. And that’s why I think the problem is people are so busy worrying what other people have and looking for ways of taking it away from them, they don’t appreciate the things they have, and people can really work on not looking to take away what everyone else has, you know, look at it as a positive. I’d much rather be in a country where the median income was maybe a hundred thousand dollars because it tells me, okay, I have a chance of getting that median income, rather than living in a country where no one has anything so I can’t be jealous of someone’s fancy cars —

RUSH: Exactly. But let me refocus the question, because I was not speaking per se. I’m glad you called to enable me to make this clarification. When I asked the question in the first hour when others around the world look at the US, why don’t they seek to emulate it and spread that specialness all over the world rather than everybody trying to get here. You’re right, there’s someone to tear it down. But the answer to the question, “Who wants to tear it down?” I’m asking about other leaders, powerful people, people who have the ability to lead movements that would emulate the United States around the world or Americans who would try to proselytize about the American way of life.

We’ve had those. And they’ve been called renegades and conquerors and imperialists and so forth. But the real reason is that most of the world’s leaders are tyrants. That’s another reason that we are special and why we are so hell-bent opposed and frightened of tyrants. We don’t want dictators, which is what most people live under. Most people were born to tyranny and bondage and dictatorship, and most, to this day, are still subject to it in one way or another, or in many ways. Those people, the tyrants and the dictators, and many others who seek to run and rule countries, do not want a free people.

The leaders in these tyrannies and dictatorships do very well economically. They are literal thieves. They plunder and steal the national wealth of the countries they lead, a la the Castros, a la the Soviet leaders. Look at the oligarchs even today there, Putin and his buddies. The thing that stands in the way of that is a free people and a runway economy. A growing economy with prosperity for all. That’s, again, what explains, illustrates, defines the specialness or uniqueness of the United States, and it really is a rarity.

My question was all of these leaders that I’m talking about, these tyrants and dictators, if you listen to them, what are the names of their countries? The People’s Republic of whatever. The people don’t have a say in anything in these countries. The leaders who claim to be for the little guy, who claim to care about the oppressed, who claim they’re gonna get even with the rich, claim they’re gonna get even with those who have their jackbooted thugs on the necks of the little guy, don’t mean it.

If they did, they would be trying to emulate the United States, and they would attempt to seek the stature and credit one would attain from founding, establishing, leading such a nation, such a prosperous nation. But that’s not who these people are. They’re dictators. They’re tyrants. They rule by the use of force and intimidation and imprisonment. And that is the story for most of the people in the world. And in light of that fact, it infuriates me even more when I have to listen to people both in this country and visitors to this country blame us for the problems in the world.

It really steams me. It really ticks me off when they start going down this road of climate change and how we’re destroying the world and we are destroying the planet. I can’t tell you, I get so insulted, I get so angry when I hear this. Anyway, I appreciate the call, Alan. I really do.

CALLER: Hi, Rush. I just want to build on your excellent point from the first hour. The left does often talk about why and how we became wealthy. Not good for special, because they think about it in those terms, but wealthy. It was at the expense of the rest of the world, on the backs of the world’s poor by imperialism and exploiting the world’s resources.

CALLER: And therefore needs to be shared and returned.

RUSH: Give it back. We gotta be cut down to size. No, he’s exactly right. But of course that’s a lie. It’s absolute gunk and BS and anybody with any common sense could have it explained to them, how did the US become special.

But the caller had a point out there, folks. And it is that the left thinks that this country became special, that it isn’t special. See, that’s the thing, it isn’t special. This country’s fraudulent. This country is founded on unjustness, ill-gotten gains, the immorality of discrimination. This is what they really believe, and people around the world do, so when you talk about emulating the country’s greatness, what made it special — But, see, they’re the ones that contradict. How about all these people telling us how wonderful and great America, we should let these immigrants in, they’re trying to improve their lives, who are we to tell them they can’t come here? Wait, what’s so special about this place? I thought it was founded in immorality, all these other rotten things.

So they contradict themselves left and right on all this, but the way they’ll catch up, “Yes, we must let the immigrants in because the country was theirs originally, until we came along and took it from ’em. It wasn’t ours. We just came in and overpowered ’em, and they were at one with nature, they were innocent, they were naive, they had no idea. They were minding their own business. They had their buffalo and they had the fish and they had the streams and they had the bears and everything was fine. And then here we came with Custer and the boys and we wiped ’em out.”

It was unfair. We did the same thing in Mexico. Why do you think they invented the pinatas? To get back at us. So it’s our fault. And all of this cutting America down to size is the price we must pay for all of the injustice we have perpetrated since our founding.