The Vatican Rumors Are Out There

CALLER: Hello, Rush. First-time caller after 25 years. Glad to speak with you.

RUSH: Thank you, Alex, very much.

CALLER: First of all, I was born and raised a Catholic, so I am certifiably Catholic, and I’ve always admired your ability to look at the big picture on these issues, and I was sort of waiting to see what your take would be on this. When was the last time a healthy living pope was suddenly replaced by another pope in the Catholic Church?

RUSH: Who just quit, just up and quit one day, and he’s still around, and he’s still living in papal headquarters in Italy. They deposed him or he wanted — whatever, your question, when’s the last time we ever remember that happening. I, of course, don’t remember it happening.

CALLER: No, I’m asking the question ’cause I think it answers itself if you ascribe to the theory that maybe there is an agenda behind the pope’s comments.

RUSH: Well, you know, it’s strange that you called today, and it’s really strange that you happened to get through today in addition to calling, because I now remember — and I’m angry at myself because I did not print this out, and I didn’t print it out ’cause I wasn’t gonna talk about it because it sounds so over the top. I read it over the weekend, and I’ve still got it somewhere. I save everything, and I have a very, very clever tagging system, so I’m gonna be able to find this. It was a story about a current member of the College of Cardinals who has written his biography. Maybe it’s not an autobiography, but it’s a biography, one of the two.

He’s living. Still alive. This biography that his — either the galleys have been seen or it is soon to be published, an Italian cardinal, according to somebody who’s seen the book, says that there is a liberal contingent in the College of Cardinals that wants the church to modernize, wants to open the church up to divorce, abortion under certain circumstances, gay marriage, and so forth, and that they engineered the removal of Pope Benedict and had chosen this pope, a cardinal from Argentina, because they thought he was the best one to carry their message. The source for this is the cardinal himself and his biography.

It’s not somebody on the outside like at the National Enquirer saying they’ve seen this or heard about it. The source is actually from the particular cardinal who’s engineered all this’s biography. So proud of it that they’re not even trying to hide what they did, that it’s eventually gonna be published in the man’s book. It either has been published or it’s soon to be. And you can understand why I didn’t print this out and make a big deal about it, ’cause it does sound kind of far out. But when you look at every other institution around that seems to have been overrun, overtaken, or corrupted, however you want to describe it, by the left, it doesn’t seem that far above and beyond reality.

Let me take a brief time-out. I’m gonna find this, using my expert search and tag system here. We’ll have the details when we get back.

RUSH: Okay. Here we go. Steven Hayward at Power Line is where I first saw this. “The Mystery of Pope Francis: Was There a Vatican Coup?” Now, Hayward is not a coup kook of any kind nor is Power Line. Power Line is the site, you may remember, that exposed Dan Rather’s fraud on that National Guard story. This is the article I was talking about. “Three days ago the National Catholic Register ran a very curious article about the contents of a newly published authorized biography of retired Belgian cardinal Godfried Danneels. 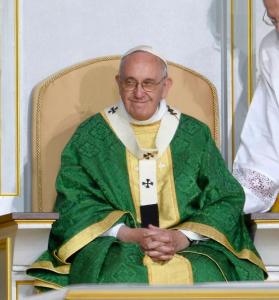 “The Register article reports: ‘Further serious concerns are being raised about Cardinal Godfried Danneels, one of the papal delegates chosen to attend the upcoming Ordinary Synod on the Family, after the archbishop emeritus of Brussels [that’s him] confessed this week to being part of a radical “mafia” reformist group opposed to Benedict XVI.'” In other words, this retired cardinal has admitted that there is a coup, that there was a Mafia of leftist cardinals that engineered the removal of Pope Benedict.

In other words, this cardinal, this retired cardinal has admitted that there is a coup, that there was a Mafia of leftist cardinals that engineered the removal of Pope Benedict. “‘At the launch of the book in Brussels this week, the cardinal said he was part of a secret club of cardinals opposed to Pope Benedict XVI. He called it a “mafia” club that bore the name of St. Gallen. The group wanted a drastic reform of the Church, to make it “much more modern,” and for Cardinal Jorge Bergoglio [the current pope] to head it.

“‘The group, which also comprised Cardinal Walter Kasper and the late Jesuit Cardinal Carlo Maria Martini, has been documented in Austen Ivereigh’s biography of Pope Francis, The Great Reformer.'” So there’s a book that says this stuff, and supposedly it’s an authorized biography for this retired pope. It’s where I first heard about it. I first read about it when I was checking out Power Line over the weekend.

Don’t expect there be anything made of this.

I can’t imagine that there would be.

RUSH: By the way, there’s another source of this story on this supposed secret group at the Vatican that got rid of Pope Benedict. So they’re not even making it a secret. It’s out there. But it’s just there. It’s not going anywhere.