RUSH: Ladies and gentlemen, it is not an exaggeration to say that we are overwhelmed with e-mails, thousands and thousands of e-mails from children and their parents, and now a number of teachers. An increasing number of teachers from all over the country are e-mailing us and talking about the Rush Revere Time-Travel Adventures with Exceptional Americans children’s book series. They’re writing us to thank us. They’re writing to congratulate us. They’re sending us pictures of themselves reading the books, opening them on Christmas morning, doing school projects related to the books. It’s the most heartwarming thing that you’ve ever seen.

We are also being inundated with requests from these same people, kids, their parents and grandparents and teachers, asking when the next one is coming out. Will there be another Rush Revere and Liberty Time-Travel Adventure Series with Exceptional Americans book? Many parents are telling us that for the first time ever their children are interested in reading the printed word, not just an iPad or an iPhone or some digital device. They’re actually interested in reading and in learning history. 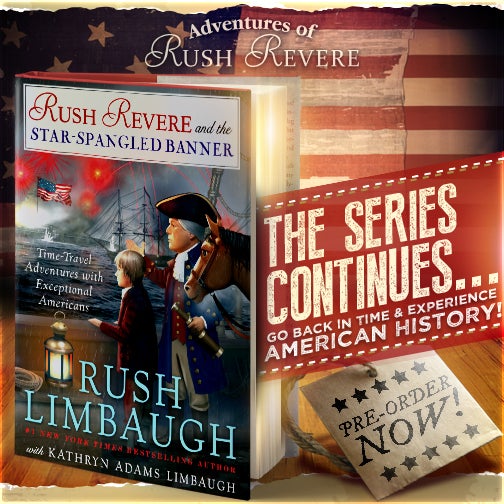 I cannot tell you what a gratifying thing it is to see all of these e-mails that we are receiving. The comments and feedback just overwhelm us, warm our hearts immensely. This whole project has become a commitment and true labor of love, because it’s a passion of mine, a passion of all of ours, that young people learn, know, respect, and revere the founding of the United States of America. We want them to know how lucky we all are to be Americans. We want them to never forget what had to happen in order for this country to exist.

We try to impart to them in language that makes sense to them the miracle that is the United States of America. The amazing stories which do not have to be embellished, do not have to be added to in any way, shape, manner, or form that made this incredible country we all live in today. And all of these e-mails and all of these requests inspire us to keep going. So I’ve been chomping at the bit here for the past — well, I mean, every time I get a call from a young child wanting to know about the next book, you don’t know how I’ve been chomping at the bit eager to say, “Oh, yeah, yeah, it’s coming up. It’s right around the corner,” but today I can.

I’m thrilled to finally be able to announce the fourth book in the Adventures of Rush Revere series. It’s available for pre-order right now. The title of the fourth book is Rush Revere and the Star-Spangled Banner. Rush Revere and Liberty, the talking horse, a brilliant creation, by the way, Liberty, this vehicle that we’ve created for the book, talking horse. By an accidental lightning strike when he was a young colt, he somehow is able to talk and time travel to anywhere in American history. And he has his trusty friend, Rush Revere, who dresses up like Paul Revere all the time. He’s a substitute teacher and takes some students with them now and then.

So Rush Revere and the Star-Spangled Banner, they travel back, they meet Francis Scott Key and learn the exact things happening as he wrote some of the most iconic words in our country’s history. But it’s not just that. I can’t give the whole thing away, but I do want to tell you that Revere and Liberty take some students back to Philadelphia when founding documents are being written. I don’t want to give anything away, but this is a major endeavor. This is what it’s all about. To construct this for 10- through 13-year-olds, that’s the primary target reader, but we’re finding adults that are telling us they’re learning things they weren’t taught as they read these books.

Francis Scott Key, Star-Spangled Banner circumstance is woven nicely with modern-day events in Washington, DC, travels to the National Archives. Folks, I have to tell you, even though I wrote it, it’s a tour de force. It’s a pleasure to be involved in the project here and to have it be so warmly received by people. It’s heartfelt, it’s patriotic, and, as I say, I can’t give away too much of this here, but there’s a field trip to Washington, National Archives. We’re finding children even younger than 8 to 10, 10 to 13 that are getting into the books as well and enjoying them. So for more information, visit RushRevere.com, or you can pre-order directly at Amazon, Barnes & Noble, Books-A-Million, maybe even iBooks. I’m not sure.

The title again is Rush Revere and the Star-Spangled Banner. It goes on sale a month from today or sometime toward the end of October, roughly a month from today, but the pre-order is here today. And I’ve been just chomping at the bit wanting to tell you, because the adventure series rolls on, folks, and all the thousands of you who’ve been asking, “Is there going to be another one, Mr. Limbaugh?” There is and it’s soon to be in your hands.