RUSH: Well to do! Thank you very much. How about you?

RUSH: Go ahead. Have at it.

CALLER: Okay. So I went to Broward College. My daughter attends a class there. She’s duel enrolled. She’s a high school student, but she’s taking a college class, and Hillary Clinton’s supposed to appear there at 2:30 today, and so —

CALLER: Yes, now. And so I left there about 20 minutes ago to pick her up, and there was nobody there to see Hillary. They have overflow parking, and it’s empty. My daughter peeked her head in to where she’s supposed to be, and she said there were a few old ladies and a couple of college kids, but nothing.

RUSH: Are you sure you’re at the right place?

RUSH: And there’s nobody there?

CALLER: No. They have signs that say “free-speech zone” when you drive in, which I guess is maybe where people could have stood if they were against her or for her, whatever. But all that’s there is the signs.

RUSH: Yeah, free-speech zones obviously is not about a Hillary’s speech. It’s obviously where you go if you want to protest.

CALLER: Disagree with her, maybe.

RUSH: Tina? Tina, hang on here just a second. I need to clarify it. I mean, this is… Hillary’s supposed to be there now like in 45 seconds, and there’s nobody there?

RUSH: You know, this isn’t anything new. Back to Tina here in Broward County in Florida. What is the name of the school? 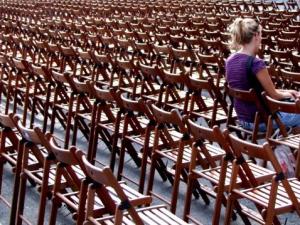 RUSH: Broward College. Look, if you’re driving around down near Broward County, Ft. Lauderdale, Florida, there’s a Democrat presidential hopeful, Hillary Clinton, there to speak, and she doesn’t have anybody there. If you’re not doing anything the next half hour, try to find the place and go show up and make it at least look like there’s some interest in what she has to say. This thing happened during her big book tour, nobody showed up, nobody bought the book, nobody showed up at the signings. This happened last week she was supposed to be somewhere, and nobody showed up, I forget which. I shouldn’t laugh here, but they assigned an overflow parking lot? And nobody’s in it?

RUSH: He-he-he-he-he-he-he. Shouldn’t laugh here, but it is a little schadenfreude. Well, you called to report this. How do you feel about it?

CALLER: I’m very happy about it. It’s good for us. It just shows that she has no following, which is what you’ve been saying and everybody’s been saying.

RUSH: Yeah, you’re right. Tina, thank you, very much. I’ll tell you what, folks, the fact that Hillary Clinton has a whole bunch of people that want her to be president is one of the biggest illusions. She doesn’t even connect. She doesn’t have a loyal base of support. She has people that support her ’cause she’s a Democrat, there’s a D by her name, but that’s it.