Pope Squishes Out on Kim Davis

RUSH: In addition to that, the pope, the Vatican, they’re walking back the fact that they met with Kim Davis. This is unheard of. I have never heard of anything like this.
The Vatican is like, “Whoa, whoa, whoa wait a minute, maybe we didn’t meet with Kim Davis. Well, we did, but we didn’t. No, no, no, don’t we’re not necessarily — no don’t think that we are.” I have never seen this kind of squishiness. I’m telling you, folks, the left is corrupting everything it touches. It’s not uplifting anything. It isn’t fixing anything. It isn’t strengthening anything. It is corrupting and destroying everything it touches.

RUSH: Okay, on the pope story, here’s CBS: “Vatican Source: Pope Blindsided By Meeting With Controversial Kentucky Clerk — Chicago Archbishop Blase Cupich is on his way to Rome tonight. Before he left, he spoke out for the first time on that controversial meeting between Pope Francis and Kim Davis, the county clerk from Kentucky who refused to issue same-sex marriage licenses. Cupich in essence told CBS 2 Chief Correspondent Jay Levine not to read too much into it. A highly placed source inside the Vatican claims the Pope was blindsided.”

Well, now it all make sense. Why in the world would the pope want to meet with anybody following the church’s teachings on homosexual marriage? Who would have even believed that could happen?

“The Vatican has since tried to distance Pope Francis from Davis. Vatican spokesman Rev. Federico Lombardi said the popeÂ’s meeting with Davis was not an endorsement of her decision to refuse to issue same-sex marriage licenses.” As I say, who would think that? Who would think the Catholic Church would oppose gay marriage? “The Pope did not enter into the details of the situation of Mrs. Davis and his meeting with her should not be considered a form of support of her position in all of its particular and complex aspects.” Okay, that’s CBS. 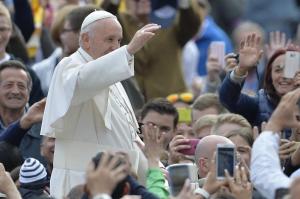 September 28th: “On the flight back to Rome, he was asked if he supported individuals, including government officials, who refuse to abide by some laws, such as issuing marriage licenses to gays. ‘Conscientious objection must enter into every juridical structure because it is a right,’ Francis said. However, Davis’ lawyer, Mat Staver, told The Associated Press that the Vatican initiated the meeting as an affirmation of her right to be conscientious objector.

“He said an unnamed Vatican official initiated the meeting on Sept. 14, the day Davis returned to work after being jailed, saying the pope wanted to meet her. He said Vatican security picked up her and her husband from their hotel and told her to change her hairdo so she wouldn’t be recognized since the Vatican wanted the meeting kept secret. Staver disputed a Vatican spokesman’s claims that the pope only met Davis in a ‘farewell lineup’ or receiving line. He said the couple was in a separate room with Francis and Vatican security and personnel.”

Well, I knew all that. That’s why this has been sort of confusing to me, ’cause I knew the pope asked to meet her. Reuters said so. The pope asked to meet her. They sent a car to pick her up. They told her to change her hairdo so she wouldn’t be recognized, and then what went wrong is somebody talked about it, and so now the pope feels the need to walk it back. I don’t know if Obama called him or what happened. I have my own experiences with something like this. There used to be a late-night TV show, and I was maligned and impugned on this program. I was not on the program that night. There was another guest, and the host of the program called and apologized, and I said, “You’re surely gonna correct this on the air?”

“You’re not gonna correct this on the air? I mean, what was said about me was diametrically wrong and couldn’t have been further from the truth.”

“Just between you and me, I just wanted to call an apologize.” Well, I happened to mention it on this show and that person was livid. But I took it public. It sounds similar here. The pope asked to meet her, pope praises her, congratulates her, conscientious objector or whatever. But now that it’s become known in the public domain it’s tough to stand behind. Here’s CBS. Looks like the same story. Yeah, same story. So that’s that. Those are the details on the pope story.