Steve Jobs, The Martian — and Me

RUSH: There’s a new movie on Steve Jobs. It’s an Aaron Sorkin movie, stars Michael Fassbender, and it’s the same people basically that did the movie The Social Network. And apparently this movie, depending on who you listen to, just savages Steve Jobs, just makes him out to be the biggest reprobate that may have ever lived, just a horrible human being, inhumane, mean, heartless, no compassion, just the most rotten, vile guy you can imagine.

So now executives at Apple and friends and family of Jobs are begging, they’re imploring Hollywood not to do this. They’re trying to get the true story out that Jobs was not the way he’s going to be portrayed in this movie. And it made me think, this is so rare that anybody on the left is savaged for anything, that when it happens, they don’t know how to deal with it. They panic and they start moving into action to try to get it changed. These people couldn’t survive as conservatives obviously for a week, with standard, ordinary, everyday media coverage that conservatives get, Republicans get, and I don’t just mean me. I’m talking about elected officials, you name it, prominent conservatives, as you know, are savaged. And here is one instance and they’re beside themselves with anger and rage and all of the usual things that you would feel when somebody you have a lot of affection for is being trashed.

I don’t know if the assessment of this movie is right. I’ve not seen it. I’m just passing along what I’ve heard. There are stories about Jobs out there, and they run the gamut from evil, maniacal, mad, heartless, cold SOB, to generous, kind. It runs the whole gamut of human emotions. But even the producers of the movie, “Hey, you know what? We took artistic license. Hey, we’ve been there and done that, too, or been there and had that happen.” (interruption) Yeah, one British paper… (interruption) Well, no, no, no, it was not a British paper. It was Jobs’ ex-girlfriend who wrote a piece. I think it was the Daily Mail or the Telegraph saying the movie doesn’t go far enough in describing what an SOB the guy was. Something about denying paternity for his daughter. Even though it had been medically, scientifically proven that he was the sperm donor, he denied it, refused to pay anything.

The daughter’s name was Lisa, happened to be the name of a Apple Computer that was released that bombed, by the way, and he claimed, “No, I didn’t name it after this daughter that’s not mine.” He said it has to do with learned integrated systems analysis, or something like that that explained the name of the computer LISA. I read that piece. This woman is loaded for bear. Leanne, Sueann, Johnann, Deeann, Brennan I think is her last name. And then it continues.

I was reading something last night, must have been NewsBusters. Oh, it was. It was a NewsBusters piece, and it was all about people reviewing the movie Mars. And the NewsBusters piece mentioned that the reviews are all mentioning me and ill papa, the pope. Oh. You know, the pope, the Vatican, they’re walking back the fact that he met with Kim Davis but they’re promoting the fact that he met with a same-sex couple. They can’t get enough of that. I mean, they’re promoting that out the wazoo. The pope had a very close and engaging meeting with a same-sex couple, longtime friend of his. They’re trying to walk back the fact that he ever met Kim Davis. They did videotape it, but they’re not gonna release that. There’s videotape of the pope hugging one of the same-sex couple people. And then the church has fired a gay priest. You know, the priest admitted he was gay, and the Vatican said, “Not for long, buddy,” and he’s gone. So here’s the pope bracing a same-sex couple, firing a gay priest, and denying or walking back that he met with Kim Davis.

Anyway, this review of the movie The Martian or whatever, mentioned that the reviewers all mentioned me, and of course what they mention — and for those of you upset with what’s happened to Steve Jobs, I really hate to make this personal, but you couldn’t walk a week in our shoes here. If you’re upset about what they’re doing to Steve Jobs in this movie, it continues in all of these reviews in the movie that mention me. It quotes me as saying it is a leftist plot to suggest Mars has water, which I never said. Sorry to be redundant. I have admitted Mars had water or has it. There are ice caps there. I disputed the idea of flowing water, but that’s still not the point.

What I said was that the news there was water on Mars is going to be used to advance the liberal agenda based on the evidence of a scientist claiming that there used to be two-thirds of the planet covered with water a mile deep but it’s no longer there “probably” is the quote, “due to a probable catastrophic event probably related to global warming.” That’s what I objected to. That’s what I said was evidence enough for me that they’re gonna politicize this discovery. Not only that, but announcement of the discovery happened to be timed with the release of the movie. NASA wants to go to Mars. 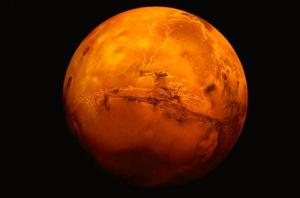 By the way, you know something else on this Mars business, folks? How long have you been alive, you remember the left complaining and whining about the space budget? “We don’t need to go Mars. We don’t need to go to the moon. We don’t need to launch the shuttle. We don’t need to do that anymore. There are people starving on this planet. What good is all this manned exploration of space?” That’s been the left’s story my whole life, except now Mars all of a sudden everybody on the left wants to go. And I wish they could. All of a sudden now it is the latest pop culture event to be positive and supportive of a manned mission to Mars. What happened to all the money that could be spent on all the starving children here, and maybe add to it the gun controversy. Why spend all this money going to Mars when we have so many social programs and problems here that need to be dealt with?

That’s been the story of the space program my whole life. But now Mars has become more than a pop culture thing. It’s become a fantasy that everybody on the left is now in favor of. And I think I understand why, in part. They all really believe that climate change is destroying the planet and in 30 years the earth’s gonna be inhabitable. Or maybe 50. Or maybe a hundred, so they’re all worried that global warming will eventually make this place uninhabitable, when they’re dead anyway. And then it doesn’t hurt to have this so-called smartest guy in the world, Steven Hawking, out there talking about all this and claiming, yep, this earth’s done, we’ve had it, stick a fork in it, the only hope we’ve got to colonize the moon or Mars or whatever. So all these leftists have just decided to dump all over the starving and the poor and the thirsty and to hell with them and let’s go to the Mars. It’s just fascinating.