Welfare Does Not Equal Charity

RUSH: A story from Breitbart here: “John Kasich Rips Obamacare Critics For Not Understanding the Bible — During a Tuesday appearance before the Hispanic Chamber of Commerce, Ohio governor and Republican presidential candidate John Kasich offered to buy Bibles for those of us who don’t agree with his decision to increase the welfare state. Quite famously, Governor Kasich agreed to Obamacare’s Medicaid expansion in Ohio.”

His defense of that is this. He said: “Look at Medicaid expansion. Do you know how many people are yelling at me? I go out to events where people yell at me. You know what I tell ’em? … I say, there’s a book. It’s got a new part and an old part; they put it together, it’s a remarkable book. If you don’t have one, I’ll buy you one. It talks about how we treat the poor. Sometimes you just have to lead.”

So Kasich’s implication here is that people who criticize Obamacare are ignorant about what it says about Obamacare in the Bible. Now, admittedly, the Bible doesn’t say anything about Obamacare. But what is Obamacare? Obamacare is the government taking over the health care system of an entire country and mandating who is going to pay for it, who is going to get it, who isn’t going to get it — i.e., the death panels — what the penalties are if you don’t abide by all of these rules. And Governor Kasich is insinuating here that all of this is in the Bible, because what all this really adds up to is charity and being good and nice and understanding of your fellow man.

What Obamacare does is uses the IRS and a number of other federal agencies to force upon people their behavior and acquiescence to this. And Kasich is trying to tell people, “Yeah, it’s right there in the Bible.” And, see, this is where welfare equals charity. And this is how charitable organizations have been swept up, almost Hoovered up, into buying into big government welfare programs because to them they think it equals charity. But it isn’t charity because it’s all commandeered. It’s not freely given. It’s mandated and there are penalties if you don’t pay up. 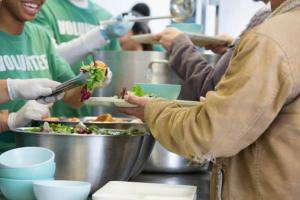 Governor Kasich said, “I had a conversation with one of the members of the legislature the other day, and I said, ‘I respect the fact that you believe in small government. I do too. I also happen to know that you’re a person of faith. Now, When you die and get to the, uh, get to the, to the meeting with St. Peter, he’s probably not going to ask you much about what you did about keeping government small, but he’s going to ask you what you did for the poor. Better have a good answer.'”

So that’s pretty explanatory. And remember, Governor Kasich was part of the Republican freshman class that came in in 1994. Well, they were elected in ’94, came in in 1995. And Governor Kasich ran the budget committee. I’ll never forget the hearing where they actually took the vote on balancing the budget for the first time in a hundred thousand years or whatever it was, and he was being hooted and hollered out of the place by the Democrats, and he sat there and he just took it. He let ’em get it out of their system, said, “Okay, we’re gonna do this. We’re gonna do this,” and ever since then it’s been like he — well, I don’t want to characterize when I’m really not sure, but from that point on, Governor Kasich’s conservatism sort of — he’ll get mad at this — but it started evolving or changing a little bit.

And this is what happened. You know, it’s O’Sullivan’s first law. Any individual or group of people that are not actively conservative each and every minute of each and every day will eventually become liberal.