RUSH: We had a sound bite yesterday from the No Labels convention in Manchester, New Hampshire, which now is run by Jon Huntsman, Republican and — ah, I’m having a mental block on the Democrat. It’s Huntsman and there’s some Democrat, you know, used to be the guy that ran McCain’s media back in 2008. I can’t remember. Mark, can’t remember his last name. Anyway, we played for you a sound bite from this yesterday where Trump got a question about women and so forth, and we played his answer, and it turns out that that woman who asked the question was a Jeb Bush plant. The Jeb Bush campaign planted a woman in the audience at the No Labels deal. Mark McKinnon, yeah, that’s the guy’s name, Mark McKinnon.

So, anyway, they plant this woman, the Jeb Bush campaign puts a ringer in this audience at No Labels, a woman who works on his staff, has worked on Huntsman’s staff. Her name is Lauren Batchelder and she is an intern here and an intern there, but she’s a campaign activist for Jeb Bush, and she was sent in there to ask Trump a question about women and so forth, which is such a juvenile thing. You know, the amazing thing about this is Jeb Bush would never do this to Hillary Clinton. Nor would any of these other Republicans.

They’ll run tricks. They’ll run juvenile little things like this against other Republicans, but they would never do this, Jeb Bush nor anybody else in this Republican field, would dare try to stack a Democrat meeting like this and put a ringer in there to ask embarrassing questions of Democrats, but they will do it against their own. Grab audio sound bite number 14. This is how it started. This is that woman, Lauren Batchelder at the No Labels Problem Solver convention, and she’s the woman that stood up and asked this question. This is the Jeb Bush campaign worker.

BATCHELDER: Okay, okay, so maybe I’m wrong, maybe you can prove me wrong, but I don’t think that you’re a friend to woman [sic]. How — what it — (cheers and applause)

RUSH: Right. And then here come the cheers. You know, that question had to be planted because there’s nobody on earth that would naturally ask that question. Not of Trump. Unless it’s a planted question. So here you have a Republican presidential campaign, the Jeb Bush campaign, trying to expose a fellow Republican using this stupid War on Women thing that the Democrats created. It’s juvenile in this day and age to think you’re going to get away with this, number one, that these people can’t be found out. It’s the age of the Internet, number one. So you’re going to find out who these people are. Number two, it’s just so weird. It’s obviously a planted question. Here is the way Trump dealt with it.

TRUMP: I knew I shouldn’t have picked her. I respect women incredibly. I have had women working for me in positions that they’d never work in terms of so many different jobs. I had a woman who was in charge of the building of Trump Tower many years ago, before anybody would have even thought of it, and did a fantastic job. I have given women more opportunity than I would say virtually anybody in the construction industry. I have a daughter named Ivanka and a wife named Melanie, who constantly want me to talk about women’s health issues because they know how I feel about it, and they know how I feel about women. I respect women. I love women. I cherish women.

RUSH: And the Jeb Bush plant, Lauren Batchelder, had a follow up. 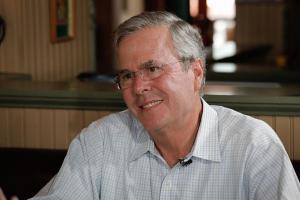 TRUMP: You are gonna make the same if you do as good a job, and I happen to be pro-life, okay, I’m pro-life. Okay.

RUSH: That may come back to give him some problems down the road, but if you’re gonna send somebody in to taunt Trump, why do it on this? It’s a No Labels convention, right? Why not go in there and harangue Trump about what he said about Mexican immigrants? Why not send somebody to stand up and ask Trump about saying McCain’s not a hero, reignite those things. Maybe they didn’t do it because Trump’s already survived those. But the fact that they chose, the Bush campaign chose a woman to go in there and try to expose Trump on the War on Women, a Democrat lie? It’s just juvenile. It’s just juvenile and right out of the Republican establishment.