RUSH: No, no, no, I’m just telling you, and I have not said this enough, I can’t claim this is a See, I Told You So. I have been suspicious of the reporting that these political debates are historically high, the ratings are historically high. I’ve just been very suspicious of this. And you look around at everything that seemingly has been corrupted, all of the institutions and traditions that you used to be able to count on to one degree or another, you have doubts about ’em all now.

So they got CNN, they’re bragging now, 15.9, almost 16 million people watched the debate last night. It’s the most-watched debate ever on CNN. Wait a minute. Is that even including the Republican debate they hosted? I mentioned there’s a story that’s actually on the CNN Money website about Nielsen and how they’ve changed their calculations, the way they measure viewership. It used to be whatever you watched on TV, that was it, that’s what they measured and they had the little black boxes. A thousand people’s homes had these boxes, and from that they made projections.

Well, now they’ve had to add streamers, people that watch on their devices, cell phones and their tablets and so forth. And from reading this story it appears that what Nielsen is doing is adding TV viewers and streamers, which I’m suspicious of, ’cause I don’t think people are doing both. You’re either streaming or you’re watching on TV but you’re not doing both at the same time. But they’re adding these things together, and look, even they admit that they’re not sure anymore who’s watching what.

But let’s take a look at last night’s debate. Would somebody explain to me, what was it last night, what was so compelling and exciting, 16 million people tuned in? (interruption) You think that’s enough? You think all of the news about Hillary and the e-mail scandal coupled with how well Bernie Sanders is doing, you think that created enough curiosity and tune-in factor for people to tune in to see just was what gonna happen to Hillary Clinton or what she was gonna do? 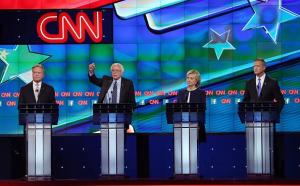 Now, what about the Fox debates? Help me out. What was the first number, the Fox — what was the number, 25 million people? Okay, that was credited to Trump and the party in general, and we were told that the interest in it was so high because there’s so many people on the Republican side so upset with what’s happening in the country, and there were 16 people, and they wanted to tune in. Twenty-five million people is a lot of people and these debates are two and three hours on cable. And, frankly, there’s much better programming out there. I mean, just in terms of entertainment value, there’s much better programming out there than these debates are, that are not drawing anywhere near 15 million or 25 million people.

Now, you may disagree. Maybe these debates have been exciting and exciting enough to some people to warrant these numbers. I read this story from Nielsen, they’re just not confident here of what they’re doing. I’ll give an example. “A TV show can be wildly popular online, inspiring binge-watching marathons and feverish Twitter chatter, but it’s still the number of people turning in via a regular television set that are counted most by networks.

“In a sign of our increasingly connected age, the Nielsen Company will finally add streaming viewers to its influential ratings of who’s watching what on TV. The new ratings will collect data on people who watch their sitcoms, dramas and crime procedurals on computer, tablet and smartphone screens. Nielsen first announced it was testing programs to track streaming viewers in April. In mid-November, it will release a software development kit that clients can use to figure out who’s tuning in online.”

Software development kit, otherwise known as an SDK. And that means that Nielsen’s gonna give its APIs to some developers so that they can incorporate the Nielsen APIs into their own software to try to come up with some sample of what Nielsen’s reporting.

“Nielsen ratings are used to figure out how many people are watching a show and the demographics of the overall audience. Networks use those numbers to determine how much to charge for ads,” blah, blah, blah, blah, blah, blah, blah, blah. “Television sets are still the primary way people watch TV, but online viewers are growing fast. They stream shows to non-TV screens, such as computers, tablets and smartphones. Their viewing habits are different, too.”

We’ve gotta add the TiVo viewers, the DVRs, we gotta add streamers and now people watching TV. And what we’re doing, we’re adding. We’re not subtracting. We’re not counting the streamer as a former TV viewer, although I have to tell you what I did last night. I was so ticked off I had to watch this thing, so you know what I did? I fired up my iPad and I put “watch TBS,” I got the TBS app and I watched the Mets-Dodgers game on my iPad. It was right next to me on the sofa, and I had one eye on that, and I had no audio on that. Who needs audio for a baseball game? I had audio on the debate, and I’m going back and forth. And if something happened in the baseball game I hit pause on the debate, waited for what happened in the baseball game to play out, then went back and resumed the debate. 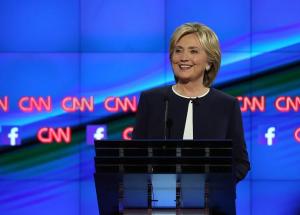 So I was doing both last night. I was. I was streaming the baseball game and rather than going back and forth on my TV I had ’em both on at the same time. No, I don’t have two screens side by side because my screen is so big that to put another screen in there would totally take over the room, and that’d be just too big. So, anyway, I was doing both. I don’t know if TBS is gonna get credit for my streaming. And, remember, I’m watching the debate under duress. In other words, it was an obligation. It was a job, something I had to do. And I did it.

But, anyway, you know, 25 million, I don’t know. Something about me, can I really believe 16 or 15 million people breathlessly, excitedly tuned in to CNN last night to see what? Maybe it’s true. Maybe there is all of this pent-up excitement about the upcoming election and our electoral process. I don’t say that’s good or bad. You know, I’m not one of these people that wrings my hands over the fact that a number of people don’t vote. Fine, the people that don’t vote means they don’t care so leave ’em out of the mix anyway, is my attitude about it.