RUSH: Eric in Margate, New Jersey. You’re next. Great to have you. Hi.

RUSH: Very well. Thank you much.

CALLER: I just wanted to let you know, I wanted to talk about the Trumpster. I think he’s tapped into some of the Democratic voters because I’m a Teamster back here, and I was working with 30 Teamsters last night. We put shows in conventions and load trucks up, and these guys, now, mind you, only three of the 30 of us are Republicans, one’s a Libertarian, and the rest voted for Obama. And these guys love the Trumpster, they love him. They love how he wants to get rid of illegals. They feel the illegals are taking our work. They love how he shoots from the hip and tells these other politicians off. If he becomes the nominee, they’re gonna vote for him. So I believe Trump has tapped into to some of the Democratic voters which people don’t realize.

RUSH: You are not… Well, you’re not the first person I have heard state that theory — and, by the way, I should tell you, Eric. Some of the people telling me this don’t like it. They’re worried that Trump is appealing to Democrats. Not for the reasons you gave, but for different reasons. And —

CALLER: All he has to say is, “All lives matter and blue lives matter,” and he’ll have the police union with him too.

RUSH: “All lives matter and blue lives matter,” and he’ll have you guys and the police… Let me ask you about you. You’re Teamsters. Obviously you vote for Obama.

RUSH: Okay, but they did?

RUSH: Are you close enough to answer some questions I have for you about them, or —

RUSH: Are they dissatisfied with their vote? Has Barack Obama let them down or are they happy-go-lucky and they think everything’s cool? Which is it?

CALLER: No, they think the country’s a mess now. They won’t admit it, though. They don’t like admitting they’re wrong. That’s part of the problem. I get along with all these guys. 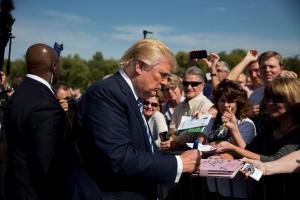 CALLER: They’re great workers. They don’t… Listen, most of the liberals, they don’t want to admit they were wrong.

RUSH: Well, see, this is a point that I have been trying to make. This is why they’re so mad and angry and unhappy out there. They got what they voted for. They thought it was gonna lead to whatever their definition of utopia is, and instead of it’s a disaster out there. Nobody’s doing well. This health care thing is an absolute joke. There’s nothing “free” about it. There’s nothing affordable about it. Nothing that Obama has done as has worked out, and yet everybody’s talking so positively.

“It doesn’t get any better! We have the first African-American president! Democrat! He’s gonna unify people,” and we’re in worse shape than we’ve been in years, and it’s because of the policies they support that this has happened, and that’s why I think… They won’t admit it; you’re right. But I think in their hearts they know that’s one of the reasons they’re depressed. They voted for every bit of this, and it doesn’t work.

CALLER: Anyway, take care, Rush. Great to talk with you.

RUSH: I appreciate it. That’s Eric in Margate, New Jersey.