The 4th Book: Rush Revere and the Star-Spangled Banner on the Shelves Now!

RUSH: My friends, a big day personally, very thrilled we are to announce book four of the Adventures of Rush Revere series available in the stores today. Pre-orders went out about a month ago. This is the fourth book. Please indulge me for a moment as I recap how this entire series came to be.

I loved the idea, and I loved Vince’s passion, but I just never acted on it. For some reason, I don’t know whether it was instinct or what have you, but I just never pulled the trigger in my own mind to do it. But during one of these sessions where Vince was leaning on me to do a book, I mean, he wanted it timed for an election, thought it could be a turning point kind of book during an election. My wife, Kathryn, said, “You know what you need to do? You need to connect with younger generations. Younger generations are not listening to the radio and they’re not watching TV much anymore.”

And she said, “They’re not being taught the American history that you and I have been taught. Why don’t you do some children’s books? Why don’t you write a children’s book? Tell the story of the American founding. These stories are being lost.” She pointed out that the public education system and beyond, I mean, even you get into college, junior college, major universities, the whole concept of the American founding has been changed, and now it’s one that basically teaches America is guilty and immoral. Now that excited me. Something I had never even thought of doing, writing children’s books, aged eight to 11, 10 to 12, somewhere in that range.

But it resonated with me because it’s so important, because I love the country. I wish everybody did. The truth of the founding of this country is one of the most miraculous events in human history, and people deserve to know what it is and deserve to be proud of their country and they deserve to understand why. So after a lot of long conversations and tireless hours, the Adventures of Rush Revere series was born with the mission to revive the American spirit and tell the amazing stories of our founding in a unique, unabashedly patriotic and accurate way. And our goal from the beginning was for young readers to experience history, not just have it shoved at them, but actually take them to it, make them a part of it.

Instead of just memorizing names and facts for a test, we wanted young readers to really understand how one event led to the next and how the country that we know and love today was born, what it took for it to happen. The obstacles that people had to overcome, the adversity that people faced, the genuine sacrifice that the Founders and early citizens of this country engaged in to make it real, to make it happen so that we all benefit from the great country that we know and love today.

And our hope was that for parents, grandparents, it would be seen as an opportunity to share the reading experience with their grandkids and kids, to make it a family event, to share the stories of American history. The assumption was that the parents and grandparents would know what’s in the books, be able to explain it in even greater detail, share their personal experiences as they were growing up with their kids and grandkids and make it an entirely family-based learning exercise that happened to be fun and invigorating. Because these stories, our history, is genuinely unique and extraordinarily American.

So we created Rush Revere. Rush Revere is a substitute teacher at a middle school. And he dresses up like an old colonial citizen. He has a time-traveling horse named Liberty. And Revere and Liberty take the reader back in time to witness events like Paul Revere’s ride, the Boston Tea Party. They’re there. We take the readers right there. They meet the people; they are at these events as they happen. The students talk and get to know exceptional patriots like George Washington.

They learn through conversation what George Washington was thinking as he prepared to battle the British. And we’ve had so much support, so much praise for this series. We are extremely grateful for all of it. I can’t tell you how gratifying it is to read literally thousands of letters and photos that people have sent us. Children, parents, teachers — teachers! — telling us how much they’re enjoying American history. Parents, you’ve heard them call here talking about their kids didn’t even like reading, much less history, ’til they got hold of these books and they started enjoying the act of reading.

And they wanted to read more, and they’re sending us pictures as they open the books on Christmas morning or as they get them and read them or as they dress up as characters in the book. And the e-mails and the response we’re getting are just overwhelming. We share a lot of that at a website we’ve set up, RushRevere.com, where all of this can be seen and where you can participate. Send in your own comments and videos and photos and what have you. Now, today the fourth book in the series is on the shelves. 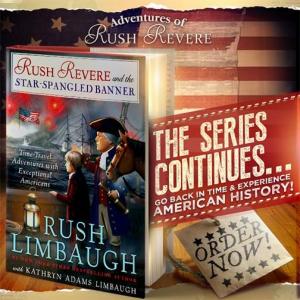 Rush Revere and the Star-Spangled Banner.

But what about young people today? What about young people eight, nine, 10, 12, 15 even? By the way, we’ve even had adults tell us they’re learning things in these books that they weren’t taught. That’s something we didn’t expect, but it’s a bonus. Everybody knows the words, everybody can sing along. But I wonder how many young people today can. Given the state of American history, I wonder how many people know the story behind the Star-Spangled Banner, our National Anthem.

I wonder how many young people know what the words mean, why they were written, when, what is the inspiration. Why is it our National Anthem? How did it all happen? Well, that’s one of the things tackled and explained in this book. The readers are taken right back to the very moment it happened. They meet and talk about it with Francis Scott Key, who is the author. We’ve dedicated this book to Kit Carson, the former irreplaceable chief of staff and trusted right hand. He lost his battle to cancer earlier this year, after we all thought he had it beat and was in remission.

And it was… Ah, it was a very sobering event, as many of you regular listeners know. The book is dedicated to Kit and other irreplaceable friends and family who’ve also faced terrible illnesses over these past years. Every one of them that we know — and I’m sure it’s the same case with you — people have battled heroically with smiles and good cheer, while they are in the throes of this disease. It’s always amazed me. It’s always amazed me the human spirit and how it dominates even ravages of terminal diseases. And you get inspired being around people like this.

You’re nervous sometimes to go to the hospital. It’s unsettling. You don’t know how to act. But in our case, Kit took care of all that by dominating every time we visited and did what he had to do to take the attention off of himself and just have a general conversation. The hospital just happened to be where he was that day. And it was truly inspiring and sad at the same time. The sadness just multiplied the inspiration that we all felt. And Kit is just one of many in similar circumstances all over this country who themselves are the definition of courage. God bless all of you in that circumstance, situation, and all the best to all of you from us. That’s why we’ve dedicated the fourth book to Kit Carson.

Now, in Rush Revere and the Star-Spangled Banner, remember: Liberty, the talking horse, was struck by a bolt of lightning when he was just a young colt, and for some reason magic happened. He’s able to time travel back anywhere in American history. Revere is his buddy, and they’re able to travel back wherever Revere thinks it would be useful. It’s a great vehicle: a talking horse, time traveling.

We can take these students back anywhere in history and they can take their iPhones and they can take video and they can bring all their experiences back and share them with the other students in their class — those that are permitted to know that all this happens. It’s a big secret that the horse talks. It’s a big secret that they time travel. It’s a big part of the whole experience in making sure the time travel does not affect what actually happened in American history. It’s really a challenging and fun way to present all of this.

Now, I don’t want to give away all that’s in this book but in Rush Revere and the Star-Spangled Banner, Tommy, one of the students who time travels, his grandfather, a veteran, is facing an illness. And in order to lift Tommy’s spirits and have him understand firsthand what his grandfather fought for, Rush Revere and Liberty arrange a special field trip. This is not a time travel; this is something new. This is a field trip in real time, current time, to Washington, DC, to see the most prominent buildings in our history, the National Archives included.

They go to a Nationals baseball game. The National Anthem, of course, is part of the book. They time travel back to watch the drafting of the Constitution. They meet and talk with James Madison, the father of the Constitution. They learn the meaning behind the words of the Star-Spangled Banner while the battle when it was written was taking place. And that’s as much as I’m going to say. But we are so thrilled and jazzed about it.

It’s the fourth book in the last two years, because the demand is increasing. Rush Revere and the Star-Spangled Banner. And I just couldn’t let this all go by again without telling all of you just how grateful we are to you for making this book, the series, this series of books, the pronounced success that it has been. And it just makes all of this more rewarding for us than we even thought it would be. So that’s it. It’s on sale today, the fourth book: Rush Revere and the Star-Spangled Banner. Look for it wherever books are sold.

RUSH: That’s right, Snerdley reminded me. I forgot to show you the book. So here it is on the Dittocam. This is what the cover of the book looks like. If you’ve not gone to pre-order it at Amazon, Books-A-Million, Barnes & Noble or iBooks, there’s the cover of the book. One of the best covers. And I need to remind everybody, the first book, Rush Revere and the Brave Pilgrims, that book is still in print, it’s still being purchased, and we won Author of the Year for that book, the Children’s Choice Book Award for Author of the Year, and the three books which have followed are even better. We can’t win the award twice a year. I mean, it’s amazing we won it even at all, given how the literary community is populated. But they were great that night, and Rush Revere and the Brave Pilgrims just continues to flow off the shelves, and it’s the starting point, this is Rush Revere and the Star-Spangled Banner, of course.